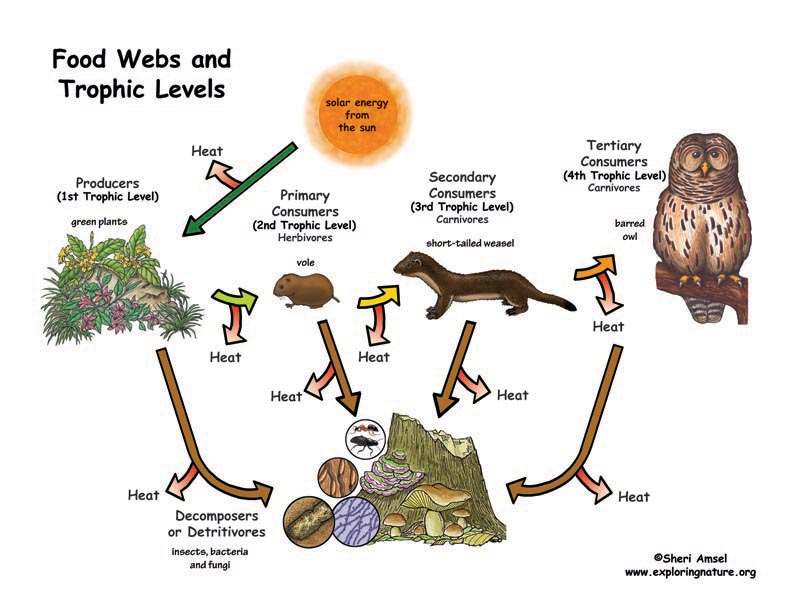 Use the Template and Resource Links to Fulfill NGSS

A. Read about foodwebs:
Food Webs - The Nutrient Cycle
About Food Webs and Trophic Levels
Soil Food Web
Cycling of Matter in the Soil
Cycles of Matter and Energy Transfer in Ecosystems

Read about how plants depend on animals and nonliving resources to help spread their pollen and seeds:
Plant Adaptations for Pollination & Seed Dispersal
Read about Keystone Species - how organisms "are dependent on their environmental interactions both with other living things and with nonliving factors" in their ecosystem:
Sea Otters
Sharks
African Elephants
American Alligator

B. Examples of Models (depicts the concept expressed in the reading):

Ask students to look at the models and explain how each illustrates the concepts they've read about.

Levels of Organization in Ecosystems - Diagram 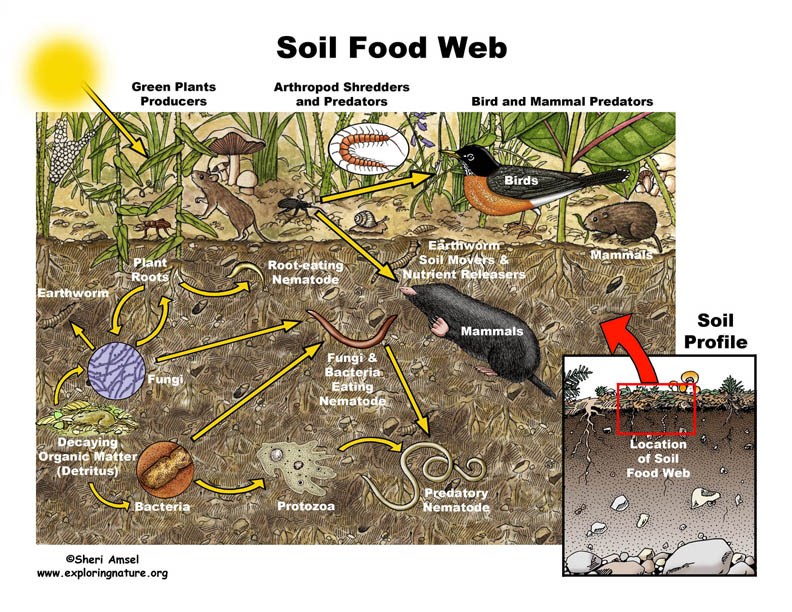 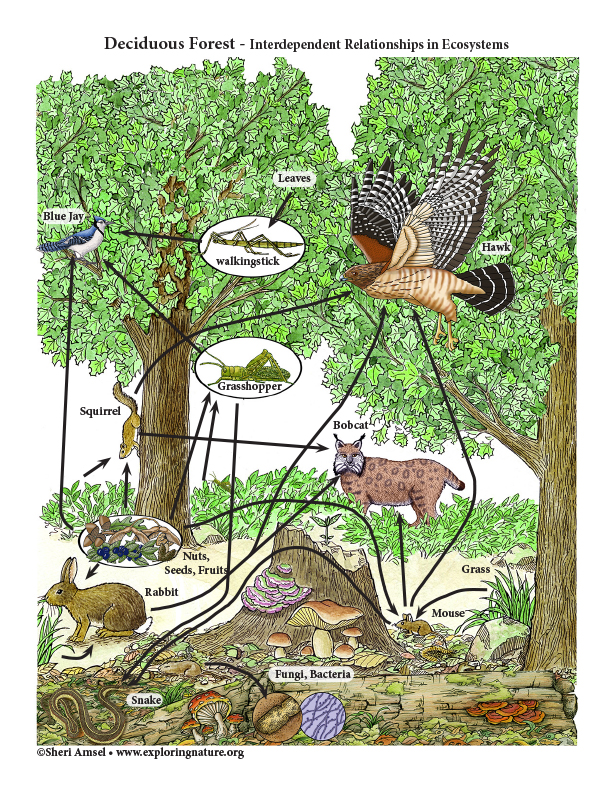 A. Inquiry related to above topics:
Study the competition between a population of plants: What Grows Here? Inquiry-based Plant Activity

Study how plants depend on animals and nonliving resources to help spread their seeds: Seed Dispersal - An Investigation 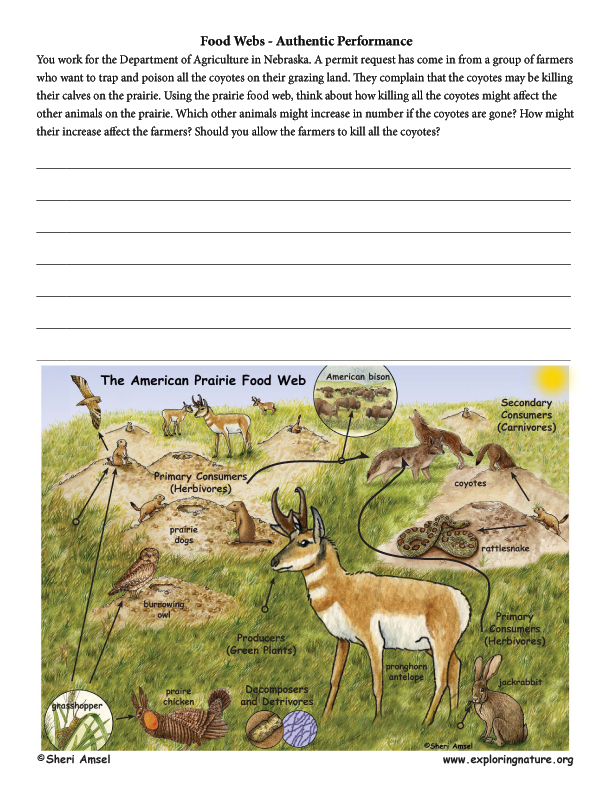 LS2.C: Ecosystem Dynamics, Functioning, and Resilience
• Ecosystems are dynamic in nature; their characteristics can vary over time. Disruptions to any physical or biological component of an ecosystem can lead to shifts in all its populations. (MS-LS2-4)
• Biodiversity describes the variety of species found in Earth’s terrestrial and oceanic ecosystems. The completeness or integrity of an ecosystem’s biodiversity is often used as a measure of its health. (MS-LS2-5)

LS4.D: Biodiversity and Humans
•  Changes in biodiversity can influence humans’ resources, such as food, energy, and medicines, as well as ecosystem services that humans rely on—for example, water purification and recycling. (secondary to MS-LS2-5)

ETS1.B: Developing Possible Solutions
• There are systematic processes for evaluating solutions with respect to how well they meet the criteria and constraints of a problem. (secondary to MS-LS2-5)

Developing and Using Models
Modeling in 6–8 builds on K–5 experiences and progresses to developing, using, and revising models to describe, test, and predict more abstract phenomena and design systems.
• Develop and use a model to describe phenomena. (MS-LS2-3)

Analyzing and Interpreting Data
•Analyzing data in 6–8 builds on K–5 experiences and progresses to extending quantitative analysis to investigations, distinguishing between correlation and causation, and basic statistical techniques of data and error analysis.
• Analyze and interpret data to provide evidence for phenomena. (MS-LS2-1)

Engaging in Argument from Evidence
Engaging in argument from evidence in 6–8 builds on K–5 experiences and progresses to constructing a convincing argument that supports or refutes claims for either explanations or solutions about the natural and designed world(s).
• Construct an oral and written argument supported by empirical evidence and scientific reasoning to support or refute an explanation or a model for a phenomenon or a solution to a problem. (MS-LS2-4)
• Evaluate competing design solutions based on jointly developed and agreed-upon design criteria. (MS-LS2-5)

Connections of Nature and Science

Patterns
• Patterns can be used to identify cause and effect relationships. (MS-LS2-2)

Scale, Proportion, and Quantity
• Phenomena that can be observed at one scale may not be observable at another scale. (MS-LS1-1)

Systems and System Models
• Systems may interact with other systems; they may have sub-systems and be a part of larger complex systems. (MS-LS1-3)

Energy and Matter
• Matter is conserved because atoms are conserved in physical and chemical processes. (MS-LS1-7)
• Within a natural system, the transfer of energy drives the motion and/or cycling of matter. (MS-LS1-6)

Structure and Function
• Complex and microscopic structures and systems can be visualized, modeled, and used to describe how their function depends on the relationships among its parts, therefore complex natural structures/systems can be analyzed to determine how they function. (MS-LS3-1)

Connections to Engineering, Technology and Applications of Science

Connections of Nature and Science

Science is a Human Endeavor
• Scientists and engineers are guided by habits of mind such as intellectual honesty, tolerance of ambiguity, skepticism, and openness to new ideas. (MS-LS1-3)

Students who demonstrate understanding can:

MS-LS2-3.  Develop a model to describe the cycling of matter and flow of energy among living and nonliving parts of an ecosystem. [Clarification Statement: Emphasis is on describing the conservation of matter and flow of energy into and out of various ecosystems, and on defining the boundaries of the system.] [Assessment Boundary: Assessment does not include the use of chemical reactions to describe the processes.]

ELA/Literacy
RST.6-8.1  Cite specific textual evidence to support analysis of science and technical texts. (MS-LS2-1),(MS-LS2-2),(MS-LS2-4)
RST.6-8.7  Integrate quantitative or technical information expressed in words in a text with a version of that information expressed visually (e.g., in a flowchart, diagram, model, graph, or table). (MS-LS2-1)
RST.6-8.8  Distinguish among facts, reasoned judgment based on research findings, and speculation in a text. (MS-LS2-5)
RI.8.8 Trace and evaluate the argument and specific claims in a text, assessing whether the reasoning is sound and the evidence is relevant and sufficient to support the claims. (MS-LS2-4),(MS-LS2-5)
WHST.6-8.1 Write arguments to support claims with clear reasons and relevant evidence. (MS-LS2-4)
WHST.6-8.2 Write informative/explanatory texts to examine a topic and convey ideas, concepts, and information through the selection, organization, and analysis of relevant content. (MS-LS2-2)
WHST.6-8.9  Draw evidence from literary or informational texts to support analysis, reflection, and research. (MS-LS2-2),(MS-LS2-4)
SL.8.1 Engage effectively in a range of collaborative discussions (one-on-one, in groups, and teacher-led) with diverse partners on grade 8 topics, texts, and issues, building on others’ ideas and expressing their own clearly. (MS-LS2-2)
SL.8.4 Present claims and findings, emphasizing salient points in a focused, coherent manner with relevant evidence, sound valid reasoning, and well-chosen details; use appropriate eye contact, adequate volume, and clear pronunciation. (MS-LS2-2)
SL.8.5 Integrate multimedia and visual displays into presentations to clarify information, strengthen claims and evidence, and add interest. (MS-LS2-3)

Mathematics
MP.4  Model with mathematics. (MS-LS2-5)
6.RP.A.3  Use ratio and rate reasoning to solve real-world and mathematical problems. (MS-LS2-5)
6.EE.C.9 Use variables to represent two quantities in a real-world problem that change in relationship to one another; write an equation to express one quantity, thought of as the dependent variable, in terms of the other quantity, thought of as the independent variable. Analyze the relationship between the dependent and independent variables using graphs and tables, and relate these to the equation. (MS-LS2-3)
6.SP.B.5 Summarize numerical data sets in relation to their context. (MS-LS2-2) 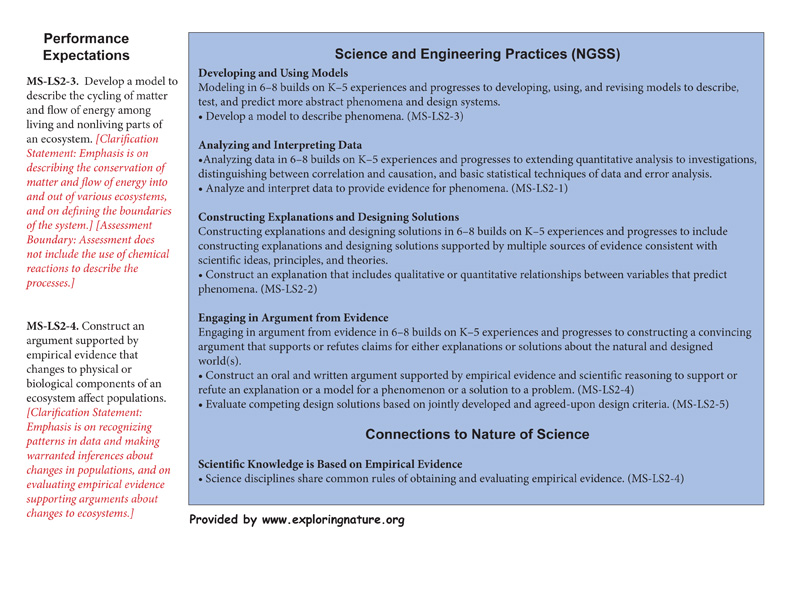 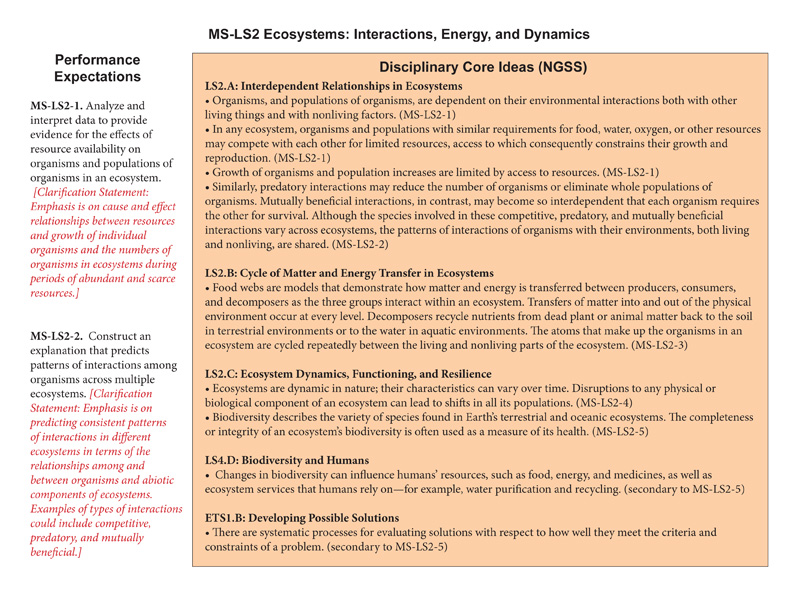 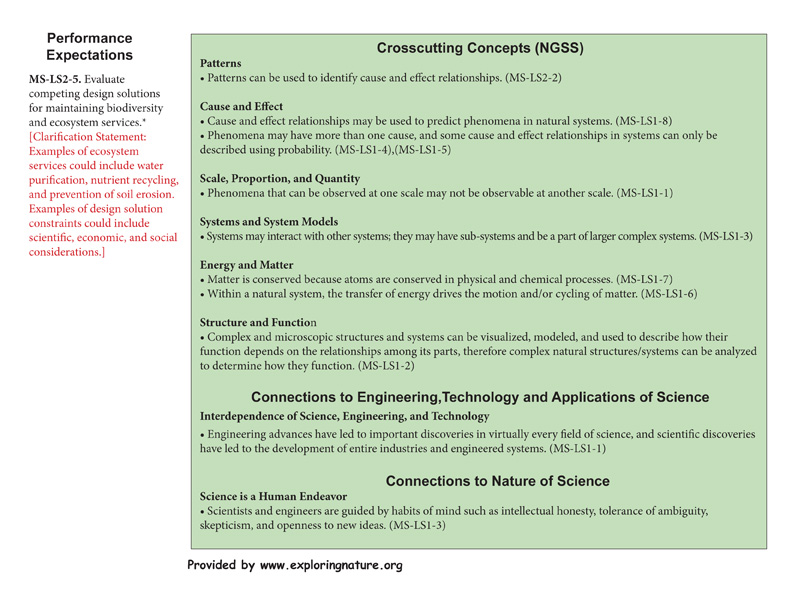 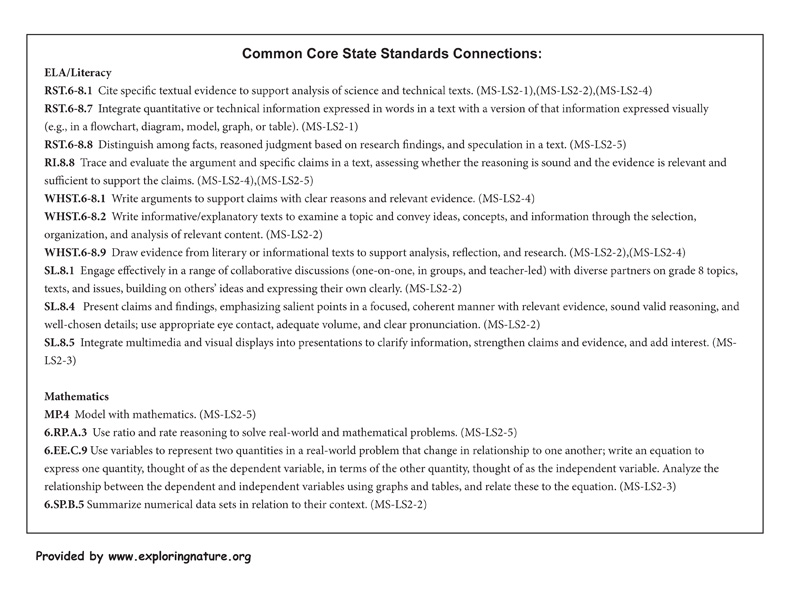 ©2005-2022 Sheri Amsel. All rights reserved.
The material on this site may not be reproduced, distributed, transmitted, cached or otherwise used for anything other than free educational use. It is not to be used for sale or profit of any kind. If you are unsure whether your use of site materials violates the exploringnature.org copyright, contact Sheri Amsel for prior written permission at sheri@exploringnature.org. Thank you for respecting copyright laws.
Site Developed by Eli Madden
Page ID: 1925
IP: 3.238.90.95