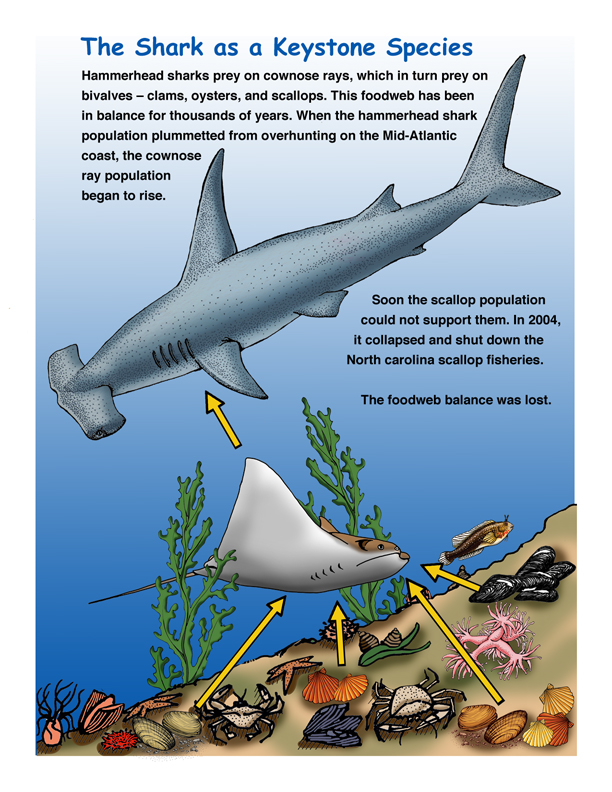 Shark populations have shrunk to less than a quarter of what they once were because of overfishing. Recent evaluations of of fishing practices estimate that more than 100 million sharks are killed every year. This is especially alarming in a species like the shark that grows slowly and does not breed for the first ten years of its life. Even after they begin reproduction, some species, like the thresher shark, only give birth to a half dozen young. This makes recovery from overfishing more difficult.
Much of shark hunting is not for food, but for the development of medical treatments. Shark cartilage and other body parts have been used to treat everything from arthritis to cancer. Unfortunately, there is no scientific evidence to date that any shark products are effective in treating any medical condition.

Sharks play an important role in ocean ecosystems. They are apex predators. This means that they are at the top of their food web and are rarely prey themselves – expect to humans. As predators, they play a role in keeping their prey populations healthy by capturing the slower, weaker fish, turtles, manatee, dolphins, etc. Many are also considered keystone species because of their importance in maintaining a balance in their food webs.
An example of this is the tiger shark. Whether in their habitat on the Great Barrier Reef in Australia or along the coasts of Hawaii, the tiger shark hunts sea turtles. Sea turtles, in turn, eats the seagrass found in shallow coastal waters. Seagrass beds are vital protective habitat for fish and shellfish. If the seagrass beds are overgrazed, the living thing hiding in them becomes visible and more vulnerable to predation. This is what happens when the shark populations decrease. In truth, it is not just sharks eating turtles that keeps the ecosystem in balance. Just the patrolling of sharks in the seagrass beds as they look for prey helps keep the sea turtles moving so they do not overgraze one area.
Sadly, this phenomenon has already been proven in places like Bermuda and along the coastlines of the Indian Ocean, where shark populations have declined and sea turtles populations have risen and entire seagrass beds have disappeared – the fish and shellfish along with them.

There are many laws in place to protect marine environments.

The Coral Reef Conservation Act (CRCA) was established in 2000 for the purposes of preserving coral reef ecosystems, promoting wise management and gaining better information on the current condition of coral reefs.

The Endangered Species Act was enacted in 1973 to protect animals from extinction. There are three major components of the ESA: listing species as either threatened or endangered, designating habitat that is critical to the species survival and restoring populations of species so they can be removed from the list.

The Magnuson-Stevens Fishery Conservation and Management Act (MSA) governs fish populations within U.S. Exclusive Economic Zone (EEZ) zone (3-200 nautical miles offshore). This act was signed into law in 1976 and there have been reauthorizations of the act several times since then, most recently in 2006.

The Marine Mammal Protection Act (MMPA) was enacted in 1972 in response to growing concerns that certain species and populations of marine mammals were in danger of extinction or depletion as a result of human activities.

The Marine Stewardship Council (MSC) is an independent non-profit organization which sets a standard for sustainable fishing. Fisheries that wish to demonstrate they are well managed and sustainable compared to the science-based MSC standard.

©2005-2023 Sheri Amsel. All rights reserved.
The material on this site may not be reproduced, distributed, transmitted, cached or otherwise used for anything other than free educational use. It is not to be used for sale or profit of any kind. If you are unsure whether your use of site materials violates the exploringnature.org copyright, contact Sheri Amsel for prior written permission at sheri@exploringnature.org. Thank you for respecting copyright laws.
Site Developed by Eli Madden
Page ID: 1808
IP: 3.239.119.61