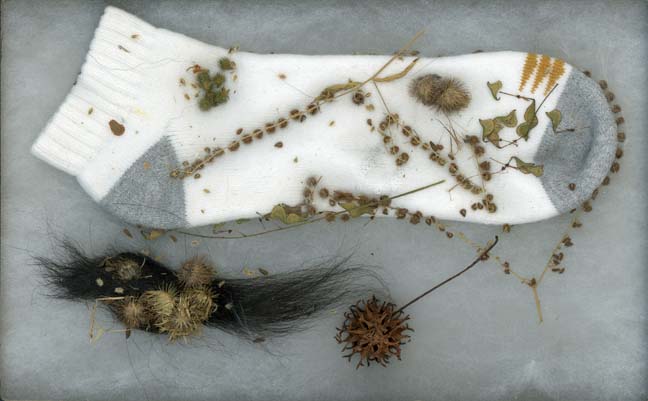 Plants and Animals
Plants and animals need each other. It’s not hard to see why animals need plants – most animals eat plants and cannot live without them. Even animals that eat other animals are dependent on plants because without them their plant-eating prey would not exist. Plants, on the other hand, make their own food with photosynthesis – using sunlight, water and carbon dioxide. Yet if all the animals disappeared from the planet, most plants would disappear as well. Why?

Plants need help to pollinate and spread their seeds. Some plants – about 10% – use the wind for pollination – from the mightiest redwood to the smallest blade of grass. Yet most plants need the help of animals to get the job done.

In turn, moving from blossom to blossom, collecting nectar, the insects spread the plants’ pollen to other blossoms on that plant and others nearby. Most plants are not picky about who pollinates them and have open flowers with ray or disc blossoms – like asters, daisies or black-eyed Susans – where any insect can land, collect nectar and carry pollen on to another flower.

The Honeybee and the Trefoil Pea
Some plants, however, want just one type of insect to pollinate them. This is true of birdsfoot trefoil. Birdsfoot trefoil is a common pea plant grown all over North America for feeding livestock and covering farm fields. Though common, it has a complicated flower, making it difficult to get inside to collect nectar or pollinate. Only bees can figure out how to enter a birdsfoot trefoil blossom and the honeybee is especially good at it.

When a honeybee lands on a birdsfoot trefoil blossom, it looks for nectar inside the top petal, called the flag, because it has guiding lines pointing to its base, but the nectar isn’t there. While it stands on the fused side petals looking for nectar, the bee’s feet work the petals open exposing a keel petal inside. (See illustrated pdf handout.)

Some might wonder what the advantage is of having only one kind of insect to pollinate a plant. Why wouldn’t the plant want every insect that lands on it to pollinate it? Some scientists hypothesize that when a honeybee finds a flower where the nectar is ready, it signals the other bees and they all come to collect nectar at once so a lot of pollination occurs. A difficult flower makes it more likely that the nectar will be there for a visiting honeybee.

Spreading Seeds
Getting its seeds spread is even harder for plants, as they are much larger than pollen and need to move away from the parent plant to avoid competing for sunlight and water. Besides for pollination, the wind does help to spread many seeds. Those plants have adapted seed shapes to ride the wind as far away from their parent plant as possible. It’s fun to see how plants have adapted their seeds for wind dispersal.

The seeds of the sugar maple are built into a flat propeller, called a samara, that helicopter away from the parent tree. The elm has a round samara that works in much the same way, where the linden tree has a long, flat wing attached to its seed stem that spins it away like a wind-driven top.

Some plants – like fuzzy goats beard and dandelions – have a globe of fluff that break up into a mass of parachutes, each holding one seed, called an achene, spinning off far and wide in the wind.

Sometimes seeds burst from a pod, like the milkweed, and float off on silken strands. Fluffy seeds burst off the rod-like head of a cattail too – each spike releasing a million seeds. Even the giant cottonwoods release seeds attached to a tuft of fluff to float away on the breeze.

A few seeds are carried by water, like the mango or coconut. Others spread their seeds explosively with catapulting seedpods – like jewelweed.

Putting the Animals to Work
Plants are also tricky about getting animals to carry off their seeds. Many plants develop a fleshy fruit around their seeds to attract animals to eat them. The seeds are spit out nearby or can survive the animal’s digestive tract. When they are “deposited” at the other end, they will sprout into seedlings. Plants like apples, pears, raspberries, and many, many others use this trick to get animals to help disperse their seeds. This works especially well with animals like squirrels and chipmunks that collect the seeds and “hide” them for later use. For an acorn, this is not only spreading the seed, but getting it planted in the ground as well.

A few plants even get their seeds spread by making them stick to whom ever walks by. They use hooks, barbs, spurs and burs. You have probably seen the seeds of cockleburs, beggar’s-ticks, or burdocks stuck in your dogs’ fur or even on your own socks. Even many grasses, like foxtail barley and bur-grass, have hooked seeds.

Testing - Assessment of Understanding:
Plant adaptations for pollination and dispersal makes for a fascinating look at structure and function. Exercise students' critical thinking with the following activities. 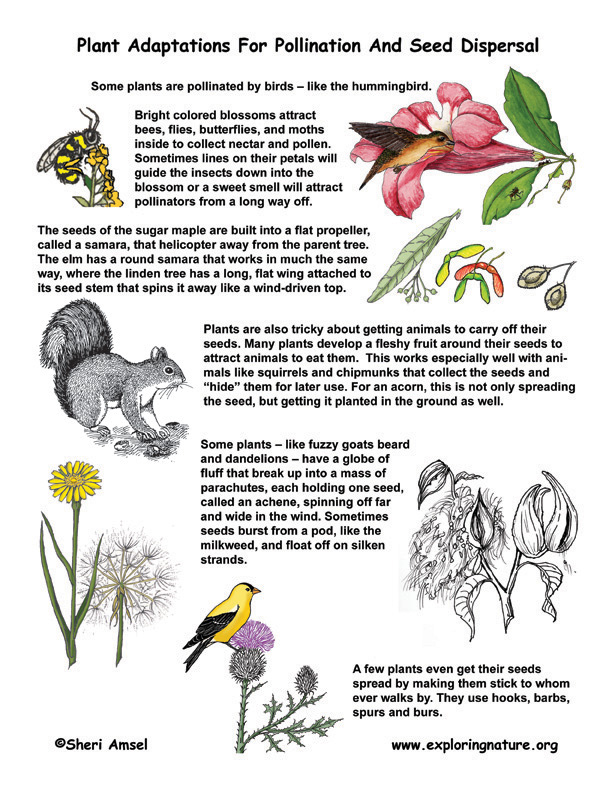 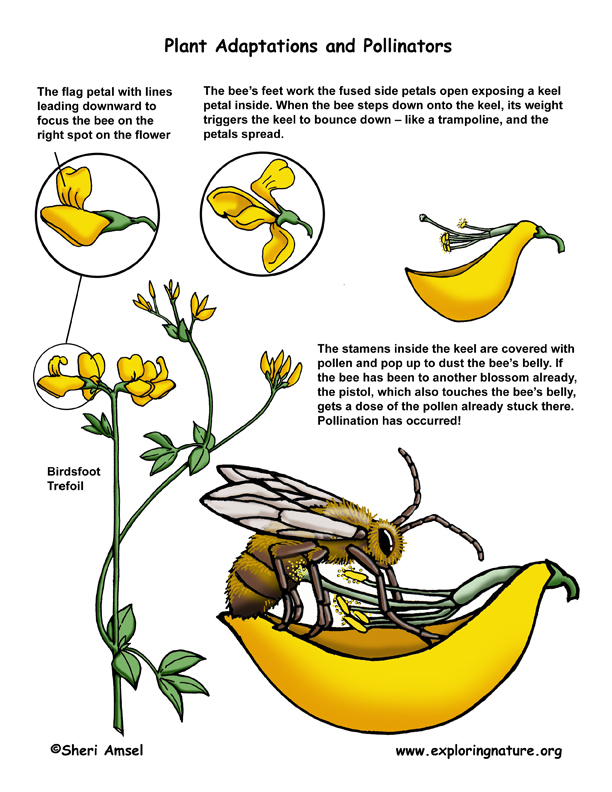 ©2005-2023 Sheri Amsel. All rights reserved.
The material on this site may not be reproduced, distributed, transmitted, cached or otherwise used for anything other than free educational use. It is not to be used for sale or profit of any kind. If you are unsure whether your use of site materials violates the exploringnature.org copyright, contact Sheri Amsel for prior written permission at sheri@exploringnature.org. Thank you for respecting copyright laws.
Site Developed by Eli Madden
Page ID: 46
IP: 3.239.119.61