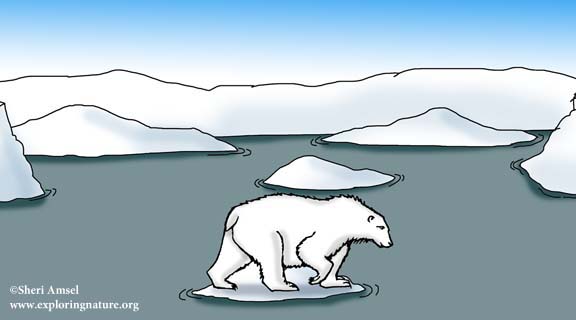 Though we generally think of black bears, grizzly bears and polar bears as winter hibernators, male and non-breeding female polar bears do not hibernate. How do they survive the extreme cold of the Arctic winters? Researchers at University of Buffalo believe that they have found at least part of the answer studying the genetic make up of polar bears.
Polar bears produce more nitric oxide in the blood than do grizzly and black bears. Nitric oxide levels are thought to be the key to how much heat is produced by cells when they break down nutrients as compared to how much energy they release.
In turn, how much nitric oxide is made is controlled by the bears’ genes. The polar bears that do not hibernate have been found, through genetic studies, to have more “enriched” nitric oxide production through gene function.
Because these polar bears have a higher nitric oxide level, their cells create more heat than energy, allowing them to stay warm at extreme temperatures.

To read more about this off site, go to our resource from Science Daily: LINK

From:  “Polar Bears Exhibit Genome-Wide Signatures of Bioenergetic Adaptation to Life in the Arctic Environment.” Feb. 6, 2017 The journal Genome Biology and Evolution.

1) How do male polar bears, who don't hibernate, survive the extreme cold of the Arctic?

2) How might this research be used to develop technology for human use?

©2005-2022 Sheri Amsel. All rights reserved.
The material on this site may not be reproduced, distributed, transmitted, cached or otherwise used for anything other than free educational use. It is not to be used for sale or profit of any kind. If you are unsure whether your use of site materials violates the exploringnature.org copyright, contact Sheri Amsel for prior written permission at sheri@exploringnature.org. Thank you for respecting copyright laws.
Site Developed by Eli Madden
Page ID: 5183
IP: 54.161.2.204