The province of Quebec is found in eastern Canada and is the country's largest Province (second only to Nunavut Territory). It makes up the eastern shore of Hudson Bay and James Bay, the southern shore of the Hudson Strait and Ungava Bay, the northern shore of the Gulf of St. Lawrence and surrounds much of the St. Lawrence River. It shares a border with Ontario, Newfoundland and Labrador, New Brunswick and the U.S. Quebec is the second most populated Province after Ontario with most of its people living in the southeast along the St. Lawrence River in Montreal and Quebec City - the Province capital. It is a French-speaking Province.
Quebec has tundra, taiga, temperate and boreal forests, and wetlands - including thousands of lakes and rivers. These natural habitats are broken down in the following way: 24% tundra, 20% taiga, 27% boreal forest, 11.5 % mixed forest, and 6.6% deciduous forest.
Quebec has a massive boreal forest of almost 300 million acres (63,322 square miles or 1.2 million square km). Most of it (about 75%) is undeveloped, making it important habitat for wildlife like woodland and barren ground caribou, Canada lynx, gray wolf and moose. Mixed in with this great forest of mostly balsam fir and black spruce are aspen, paper birch, and white spruce. There are also rivers, lakes, ponds, bogs and peatland that are vital habitat to as many as 500-million breeding birds (estimates are 180 species of birds). 25% of Canada’s woodland caribou live here.
The whole province is rich with waterways including the St. Lawrence River which is large enough to navigate trans-Atlantic boats to Montreal (almost 1,000 miles upriver from the ocean) when not frozen. Other large rivers include the Ottawa, St. Maurice, Richelieu, and Saguenay Rivers. Quebec has thousands of lakes - the largest is Mistassini Lake which measures 537,600 acres (840 square miles or 2,175 square km).
Quebec Province has been broken down by scientists into Ecozones – Northern Arctic, Southern Arctic, Hudson Plains, Taiga Shield, Boreal Shield, Mixedwood Plains and Atlantic Maritime Ecozones.

The Northern Arctic Ecozone makes up the northwestern corner of Quebec. This ecozone is the coldest, driest region of Quebec (and Canada) – often called an arctic desert. The permafrost only thaws on the surface during the short summer. This ecozone is a treeless plain with some stunted trees and shrubs, sedges, moss, and low-lying plants. Animals must be well-adapted for survival in these extreme conditions. Some include mammals like: polar bear, wolverine, musk ox, arctic wolf, arctic fox, weasel, arctic hare, snowshoe hare, and barren-ground caribou. There are also birds like the snowy owl, gyrfalcon, snow goose, and king eider. No reptiles or amphibians live in this region.

The Southern Arctic Ecozone runs in a band just south of the Northern Arctic Ecozone. This region – also called the Barren Lands, is a treeless plain with very long, very cold and dark winters. Because of the permafrost, the ground is wet throughout the short, cool summer and grows only dwarf trees and shrubs, heath, moss, sedges and lichens. As in the Northern Arctic Ecozone, animals here must also be well-adapted for survival like the polar bear, grizzly and black bear, wolverine, musk ox, arctic wolf, arctic fox and red fox, weasel, arctic hare, snowshoe hare, and barren-ground  and woodland caribou.
The Eastern Taiga Shield Ecozone is a flat, wet region of subarctic shrub tundra (in the north) and boreal forest (in the south) with long, cold winters. It acts as the transition between the Arctic and boreal forests and is dotted with millions of lakes left by the retreat of the glaciers. The lakes and bogs make it a popular breeding ground for waterfowl.  The forest includes: black and white spruce, jack pine, green alder, paper, white and dwarf birch, tamarack, balsam fir, quaking aspen, and balsam poplar. The region supports animals that can tolerate subarctic conditions, including black, grizzly and polar bear, wolf, lynx, moose, barren-ground and woodland caribou, coyote, weasel, wolverine, river otter, red and arctic fox, muskrat, marten, mink, beaver, vole, red squirrel, and snowshoe hare.

In the northeastern corner of Quebec, along the Ungava Bay, is a sliver of Arctic Cordilla Ecozone. This is a region of jutting rocks, mountain chains, polar ice fields and glaciers along the coast of deep fiords. It is a beautiful region with an extreme climate. The few hardy plants and lichens are the only food source for the region's two herbivores - the musk ox and barren-ground caribou. Other mammals include polar bear, arctic wolf, arctic fox, arctic hare, weasels and lemmings.

Along Hudson Bay, there is a small pocket of Hudson Plains Ecozone. This region is a lowland plain dominated by wetlands – peat bogs and fens and with coastal beaches and mudflats. This is vital habitat for migrating birds. There is a permafrost and long, very cold winters. Summers are short and cool. Polar bears frequent the coastal region as do breeding waterfowl. Woodland caribou, moose, black bear, fisher, marten, and arctic fox roam the inland wetlands.

The Boreal Shield Ecozone is a huge ecozone that stretches all across Canada with rolling hills covered in boreal forest. Millions of lakes were left by the retreat of the glaciers. These, along with with its abundant bogs and fens found throughout the region, make it a popular breeding ground for waterfowl. The forests here include: black and white spruce, jack pine, green alder, paper, white and dwarf birch, tamarack, balsam fir, quaking aspen, and balsam poplar. The region supports black bear, wolf, lynx, moose, barren-ground and woodland caribou, coyote, weasel, wolverine, river otter, red and arctic fox, muskrat, marten, mink, beaver, voles, red squirrels, and snowshoe hare.

South of the Boreal Shield is a small region of Mixedwood Plains Ecozone. It contains mixed and hardwood forests, wetlands and some prairie and is considered the northern end of the eastern temperate deciduous forest with trees like: eastern white and red pines, eastern hemlock, yellow birch, sugar maple, red oak, basswood and elm. The region has a rich diversity of wetlands adjacent to the Great Lakes and both the Ottawa and St. Lawrence Rivers - though many have been damaged or destroyed by development. Wildlife here includes: white-tailed deer, coyote, weasel, red fox, badger, raccoon, striped skunk, muskrat, beaver, woodchuck, gray squirrel and snowshoe hare. Though this is a small portion of the Quebec Provence, the Mixed Plains Ecozone has the most people. 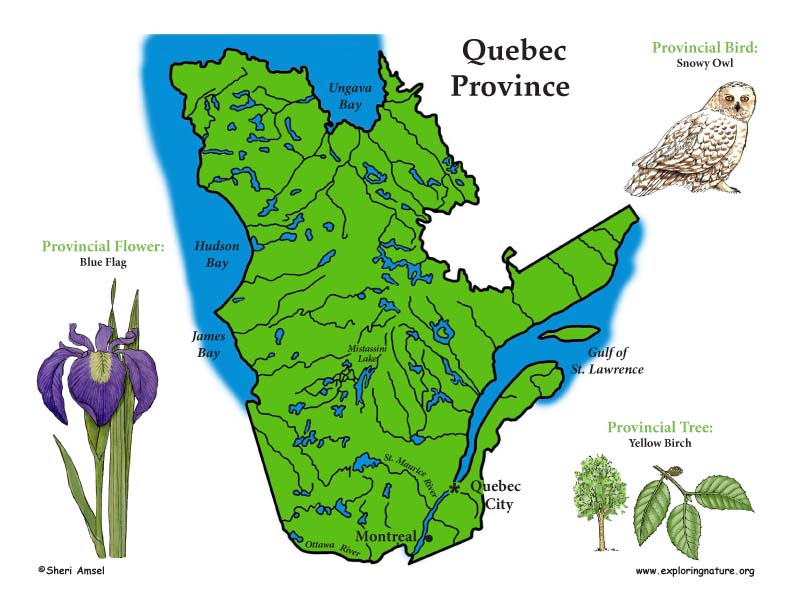 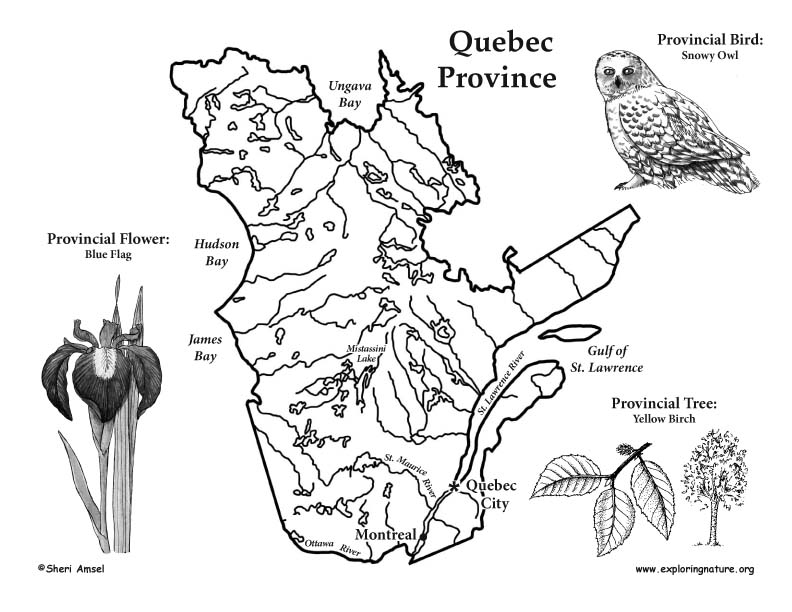 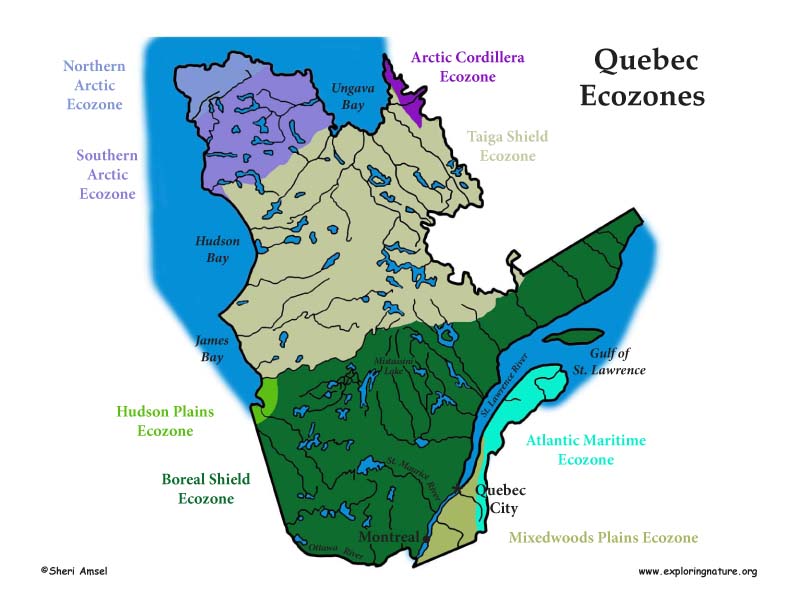 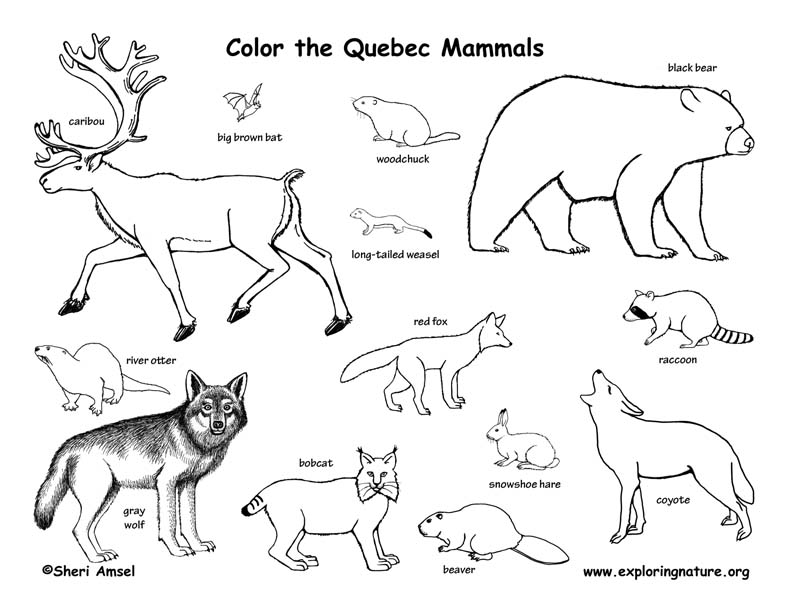 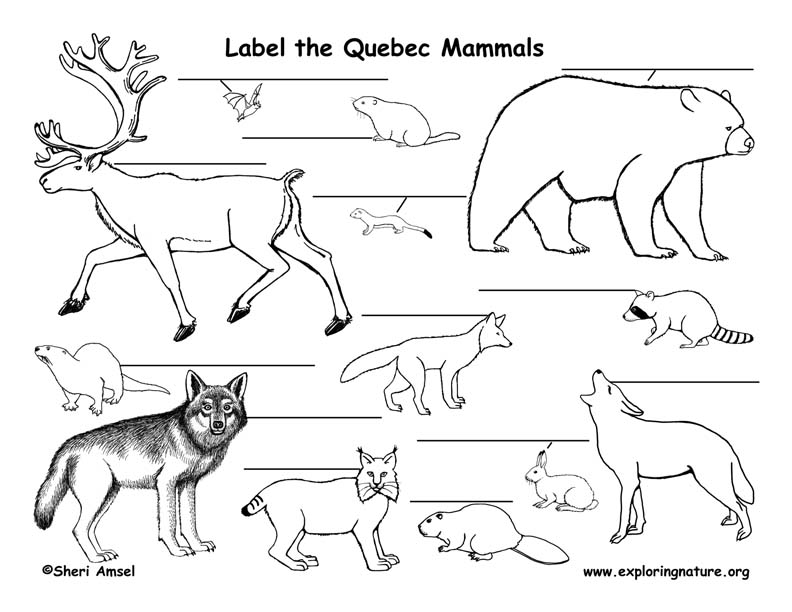 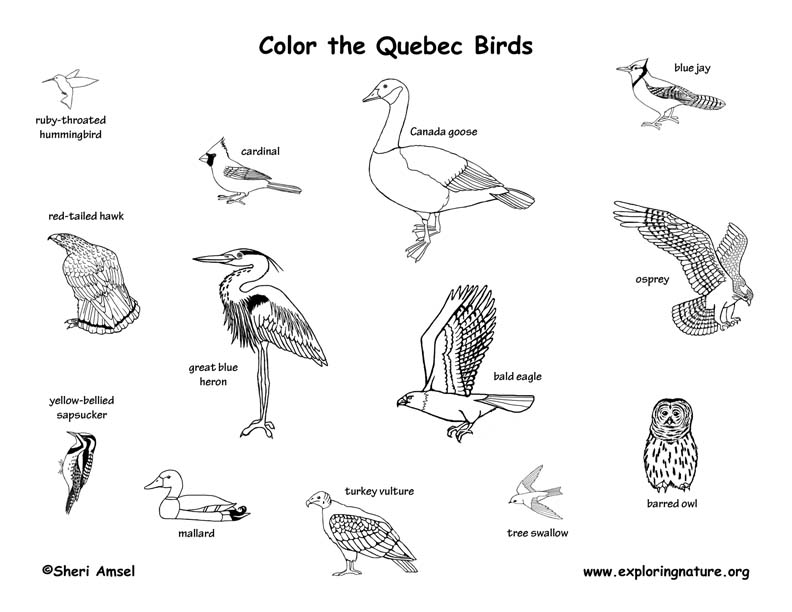 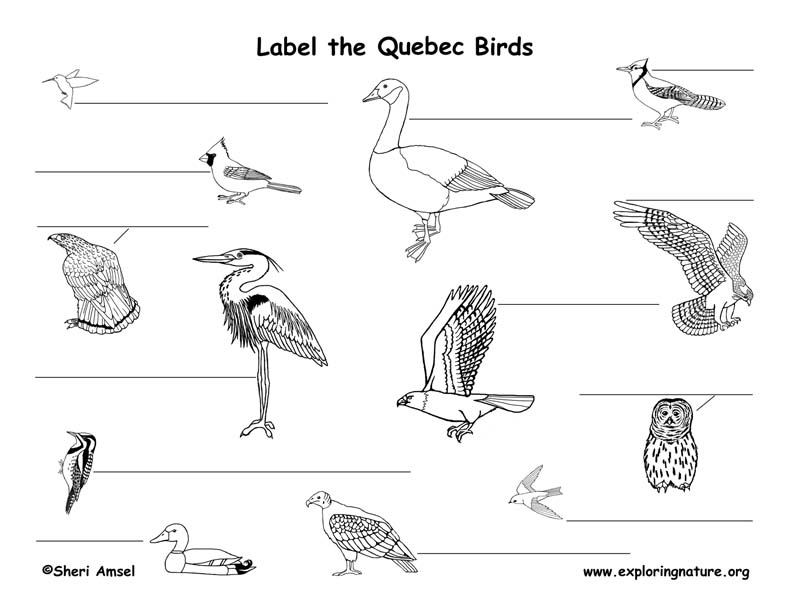 For more details about Quebec's amphibians and reptiles: LINK 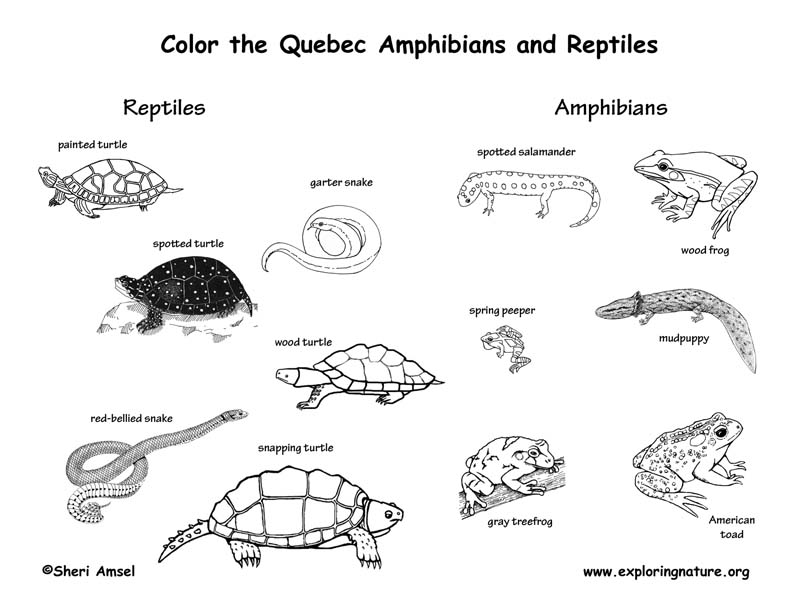 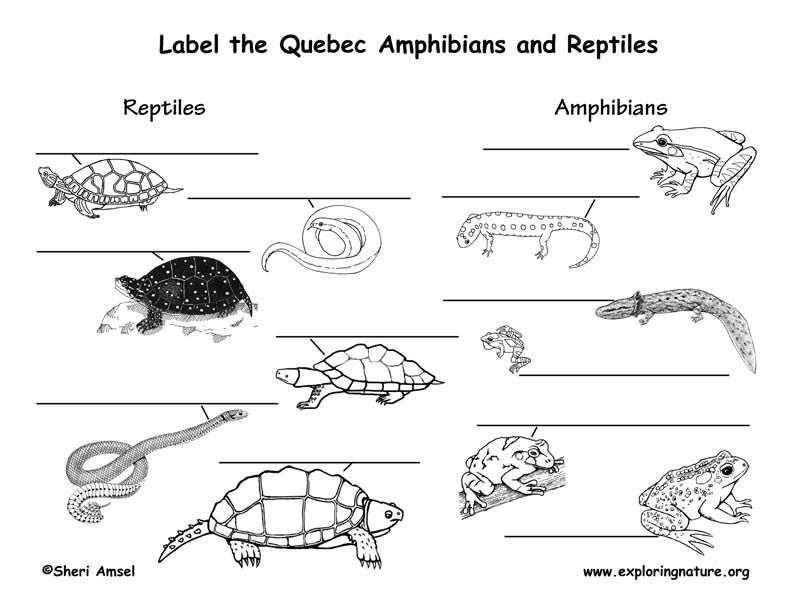 ©2005-2022 Sheri Amsel. All rights reserved.
The material on this site may not be reproduced, distributed, transmitted, cached or otherwise used for anything other than free educational use. It is not to be used for sale or profit of any kind. If you are unsure whether your use of site materials violates the exploringnature.org copyright, contact Sheri Amsel for prior written permission at sheri@exploringnature.org. Thank you for respecting copyright laws.
Site Developed by Eli Madden
Page ID: 1769
IP: 44.200.175.255