Manitoba is the province in central Canada between Saskatchewan and Ontario and just north of Minnesota and North Dakota in the U.S. It has an extensive coastline with Hudson Bay and covers about 160,600,000 acres (250,947 square miles or 649,950 square km). Manitoba is thought to have more than 100,000 lakes – it's largest, Lake Winnipeg, covers about 6 million acres (9,465 square miles and 24,514 square km). The highest point in Manitoba is Baldy Mountain at 2,730 feet (832 meters). The capitol is Winnipeg – where more than half the people in the province live.
Manitoba has 141 million acres (570,000 square km) of boreal forest where 2,500 boreal woodland caribou and more than 700,000 barren ground caribou make their home. It is the breeding ground for more than 250 species of birds. As many as 300 million birds breed there each year.

Manitoba is broken down by scientists into natural communities called "Ecozones."

The northernmost region of Manitoba is in the Western Taiga Shield Ecozone. It is a flat, wet region of subarctic shrub tundra (in the north) and boreal forest (in the south) with long, cold winters. It acts as the transition between the Arctic and boreal forest and is dotted with millions of lakes left by the retreat of the glaciers. The lakes and bogs make it a popular breeding ground for waterfowl. The forest  (which along with the Boreal Shield Ecozone) covers 48% of Manitoba and includes: black and white spruce, jack pine, green alder, paper, white and dwarf birch, tamarack, balsam fir, quaking aspen, and balsam poplar. The region supports animals that can tolerate subarctic conditions, including black and polar bears, wolf, lynx, moose, barren-ground caribou, coyote, weasel, wolverine, river otter, red and arctic fox, muskrat, marten, mink, beaver, vole, red squirrel, and snowshoe hare. Humans mine ore and explore for oil in this region.

Between the Taiga Shield Ecozone and Hudson Bay, there is a small sliver of Southern Arctic Ecozone. This region, also called the Barren Lands, is a treeless plain with very long, very cold winters. It is in this ecozone that the barren-ground caribou come to have young in the short, cool summers. Because of the permafrost, the ground is wet throughout the summer and grows only dwarf shrubs, mosses, sedges and lichens.

South of the Taiga Shield is a large region called the Boreal Shield Ecozone covering almost 1/3 of Manitoba. This huge ecozone stretches all across Canada with rolling hills covered in boreal forest. Millions of lakes were left by the retreat of the glaciers. These, along with with its abundant bogs and fens found throughout the region, make it a popular breeding ground for waterfowl. The forests here include: black and white spruce, jack pine, green alder, paper, white and dwarf birch, tamarack, balsam fir, quaking aspen, and balsam poplar. The region supports black bear, wolf, lynx, moose, barren-ground and woodland caribou, coyote, weasel, wolverine, river otter, red and arctic fox, muskrat, marten, mink, beaver, voles, red squirrels, and snowshoe hare.

In northeastern Manitoba, along the Hudson Bay is the western tip of the Hudson Plains Ecozone. This region is a lowland plain dominated by wetlands – peat bogs and fens and with barren, coastal beaches and mudflats. There is a permafrost and long, very cold winters. Summers are short and cool. Polar bears frequent the coastal region as do breeding waterfowl. Woodland caribou, moose, black bear, fisher, marten, and arctic fox roam the inland wetlands. Humans use the region for outdoor recreation, including ecotourism where they view wildlife.

Southern Manitoba has the Prairie Ecozone. This cold, flat region was once tall grass prairie but today has been developed into agricultural and oil-producing land. This is considered part of the "Breadbasket of Canada" and as much as 94% of this ecozone is used for agriculture and grazing. There is also a lot of exploration for  natural gas, and petroleum. Little of the natural habitat is left in the region and it is considered the most endangered natural habitat in Canada today. Wildlife includes elk, white-tailed deer, coyote, badger, white-tailed jackrabbit, Richardson’s ground squirrel and northern pocket gopher. 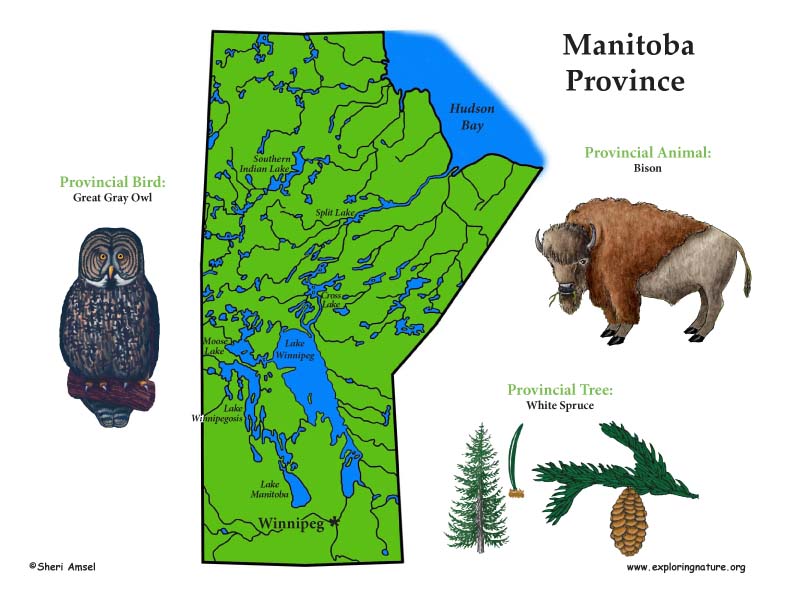 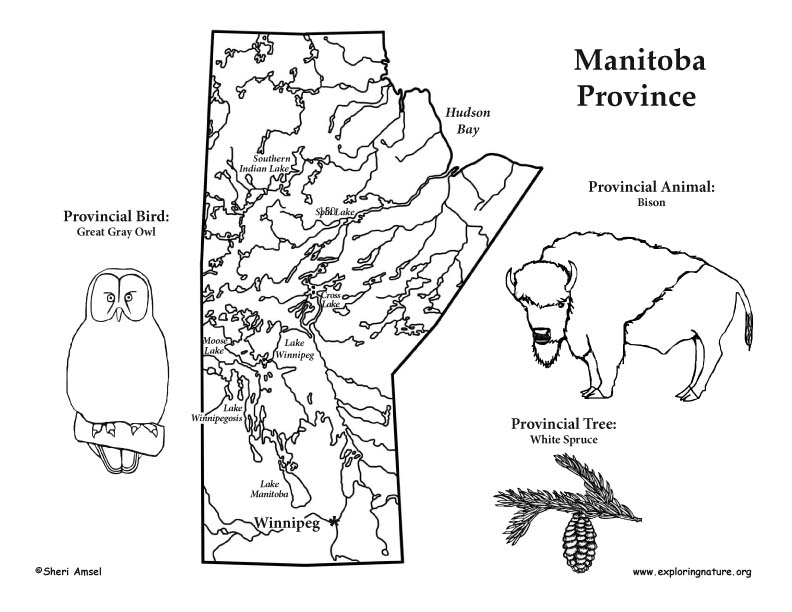 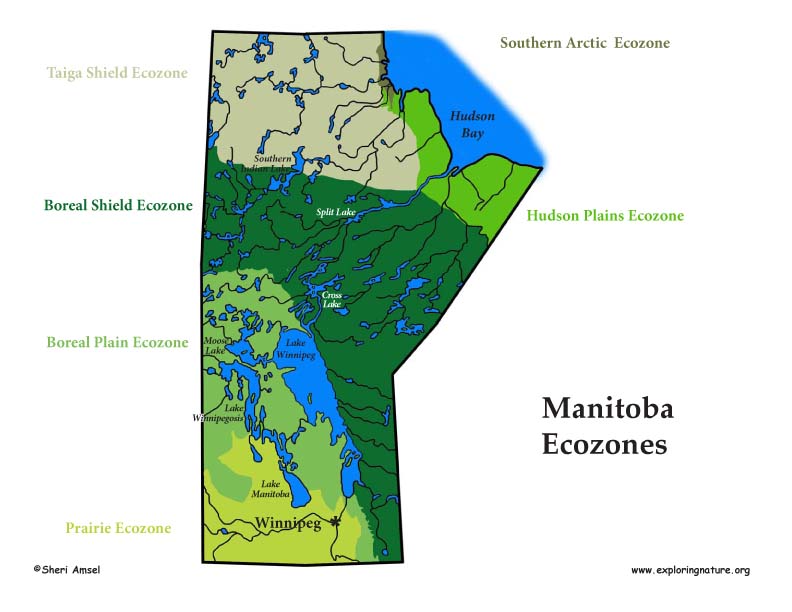 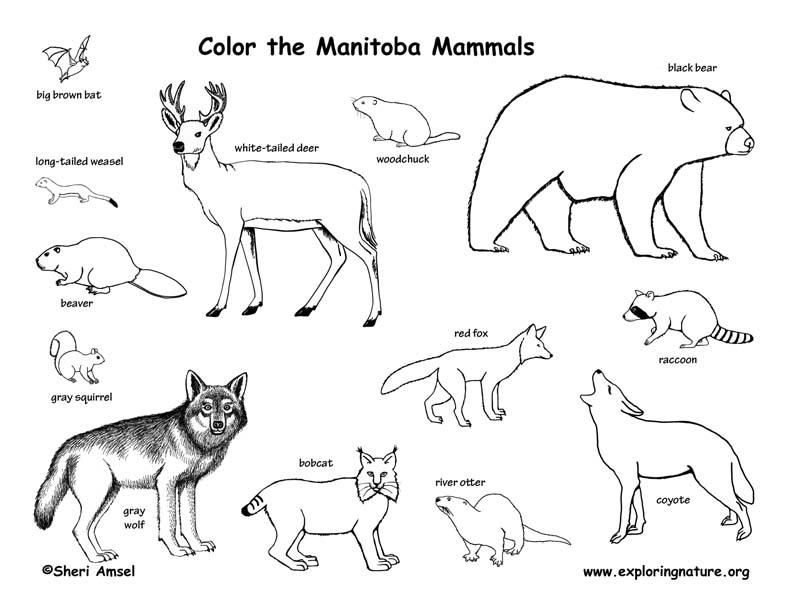 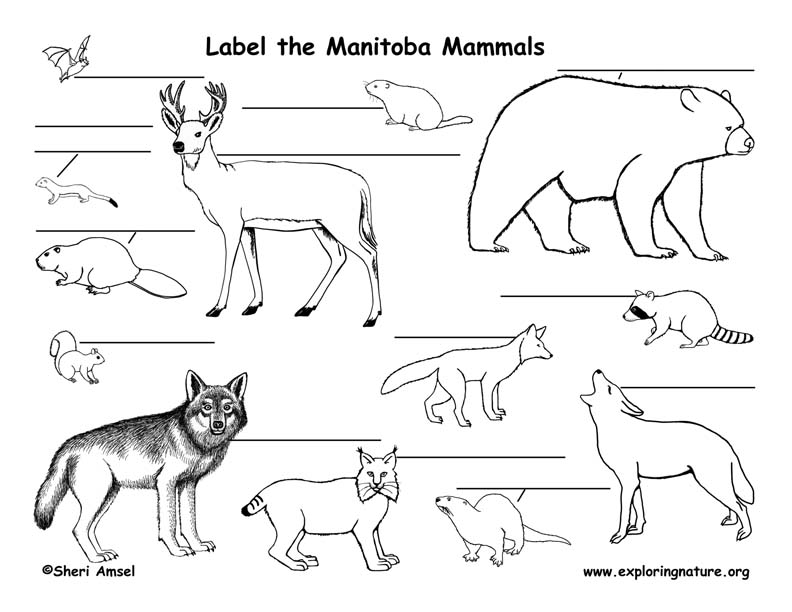 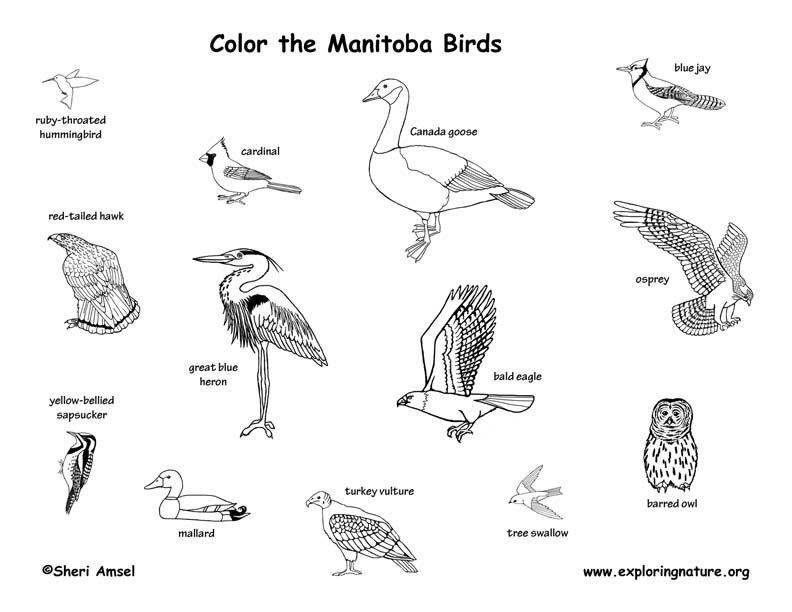 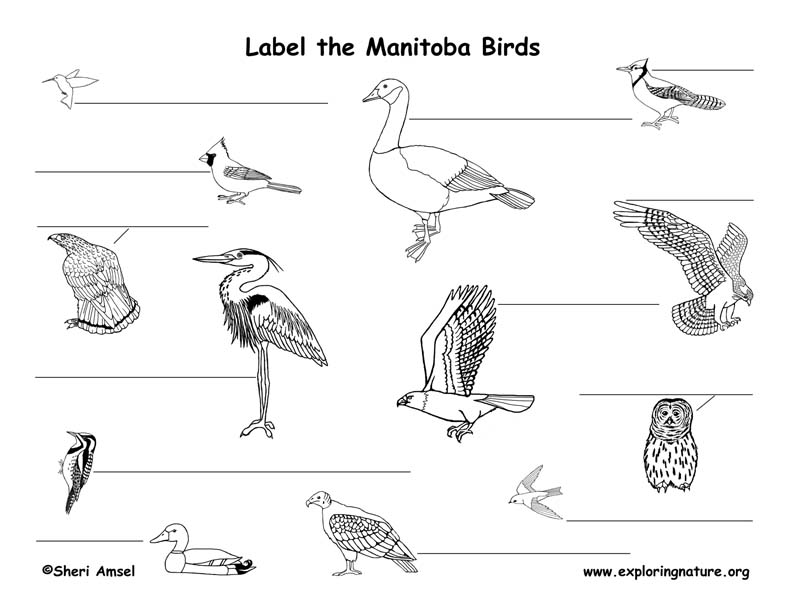 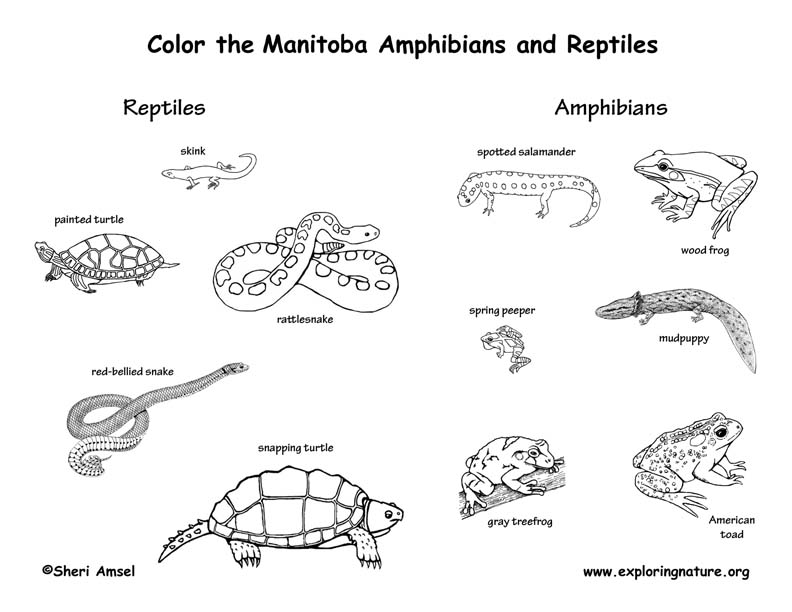 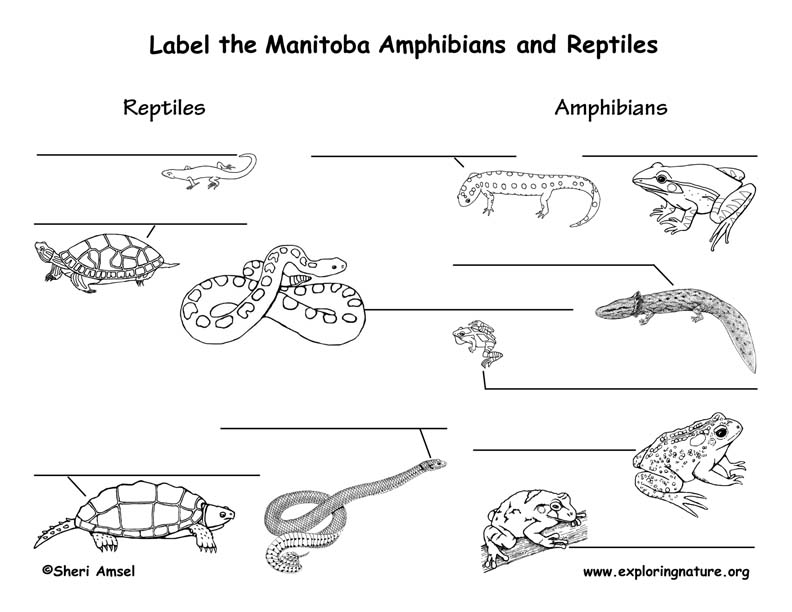 Get to know Manitoba’s Animals and Habitats with the Manitoba, Canada Bundle.
This includes 12 downloadable pages: 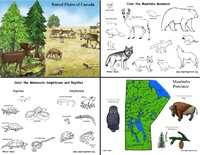 ©2005-2022 Sheri Amsel. All rights reserved.
The material on this site may not be reproduced, distributed, transmitted, cached or otherwise used for anything other than free educational use. It is not to be used for sale or profit of any kind. If you are unsure whether your use of site materials violates the exploringnature.org copyright, contact Sheri Amsel for prior written permission at sheri@exploringnature.org. Thank you for respecting copyright laws.
Site Developed by Eli Madden
Page ID: 1761
IP: 44.200.175.255