For ten years growing up, I lived on Long Island, a vast expanse of suburban sprawl intermixed with parks, malls and “sumps”. What on Earth is a sump, you might ask. I will explain. Long Island had a water table so shallow that when it rained hard (which it did a lot) all the sewer drains would overflow and the water would run like small rivers down the sides of suburban streets. Most towns of that era had “sumps,” large football field-sized depressions that were fenced in and served as water overflow areas in many neighborhoods.

They also turned out to be breeding grounds for unwanted goldfish. Apparently people who had outgrown their pets, would toss them into the sumps where they did quite nicely, some growing to astonishingly large sizes. They could live there for quite a while fattened up on insects and debris. Then there would be a hard rainfall and the water would overflow from the storm sewers and sumps and flow down the streets, along with… the goldfish.

When we were kids these goldfish-laden streams would run down our streets right in front of our houses. We would use any tool and container available to collect them. The favorite was the tennis racket and mixing bowls full of rainwater would was ad hoc holding tanks. As the goldfish came flowing by, we would net them with the tennis racket and whip them into the mixing bowls. Game, match, point. In an average rainstorm we could collect upward of fifty goldfish of varying sizes.

All the kids on the block took part in the collection, it was like a carnival game where you actually got to keep the goldfish. Except that most parents didn’t let their kids bring the fish home afterward. They called them sewer fish. We, however, being an equal opportunity wildlife collection household, were allowed to keep ours. We also inherited the goldfish catch from all the kids on the block.

The goldfish would go into a large fish tank in the den where we kept them until they died off, one by one, probably from depression since this relatively small box was not the large, mucky sumps to which they had grown accustomed.

This brings me to the real reason for this trip down memory lane. The concept of Rain Gardens. This is a relatively new concept that, from my previous story I realize, has been around in practice for a long time — though rain garden sure sounds more romantic than sump!

The idea of a rain garden is simple. It is a garden you plant in your yard with water-loving native plants to which you direct all the water that runs off your roof, driveway, and lawn. It collects like a little pond for a few hours and then drains away into sandy soil and safely back into aquifers (underground water sources) avoiding storm water flooding. 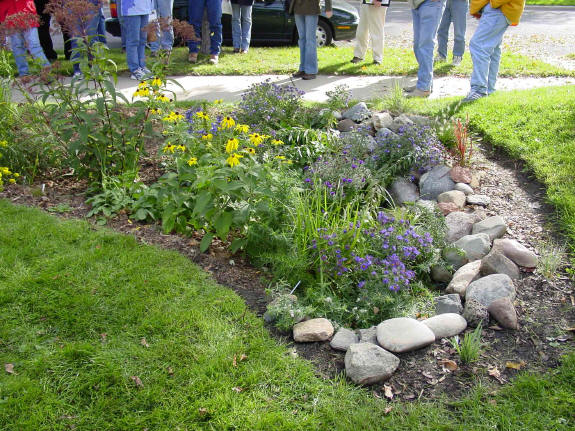 This is useful for several reasons, but the main one is that storm water running off of roofs, sidewalks, parking lots and other hard surfaces carries pollutants and litter and washes it all into our waterways – rivers, lakes and the ocean.

Many communities have discovered that small rain gardens can virtually eliminate storm water flooding in their neighborhoods. Developers have begun to catch on and are adding these to newly constructed communities because they can actually save money on storm water drainage systems. Don’t you just love win win situations?

If you are interested in developing a rain garden in your yard here is about the best reference I have found to date, though there are many out there: http://www.uri.edu/ce/healthylandscapes/raingarden.htm

1 thought on “When We Were Young and it Rained… Goldfish”