Will the Melting of the Polar Ice Caps Affect the Saltiness of the Ocean? 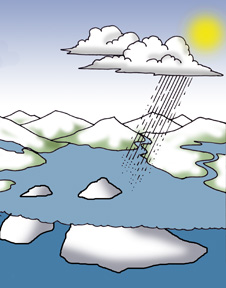 NASA studies the Earth from space via satellites. From here they can see changes in the shape and size of the polar icecaps. They can see that the year-round ice pack in the Arctic is shrinking. In the past 25 years it has shrunk 10%. Scientists have also been watching satellites that have been collecting the Earth’s surface temperatures for 20 years. They show that the temperatures are rising. In 2003 the largest ice shelf in the Arctic that had been in place for 3,000 years, broke up into the ocean. Climate does change naturally over time, but rapid changes are unusual. These facts may signal global warming.
How would melting ice caps affect the planet? For one thing the bright white ice caps reflect a lot of the sun’s energy back to space. As the icecaps shrink, more sunlight will be absorbed by the Earth, warming the climate even more. Melting icecaps would make more water available for the water cycle, which could change the rain patterns and how salty the ocean is around the poles, affecting ocean fisheries.
The shrinking ice shelf is already affecting arctic animal populations. Species like polar bear who hunt seals off ice shelves are unable to find prey as easily without the frozen platforms. Scientists have found that hungry polar bears are drowning while trying to get to prey without the usual ice shelves available from which to hunt.

Melt Some Ice Caps Demonstration
Will the melting ice caps dilute the ocean’s salt water around them? Will it raise the ocean levels?

Supplies:To test this you will need:

Look at both glasses. What do you notice? Is the glass with the melted ice is fuller (Did the water level rise?) Is the dark liquid is lighter (Is it diluted)? If that liquid had been salt water like the ocean, would it be less salty now? 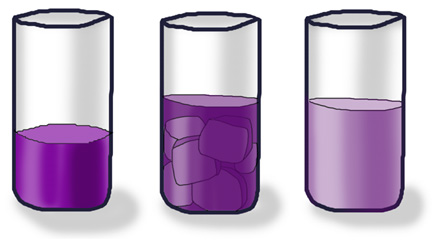 ©2005-2022 Sheri Amsel. All rights reserved.
The material on this site may not be reproduced, distributed, transmitted, cached or otherwise used for anything other than free educational use. It is not to be used for sale or profit of any kind. If you are unsure whether your use of site materials violates the exploringnature.org copyright, contact Sheri Amsel for prior written permission at sheri@exploringnature.org. Thank you for respecting copyright laws.
Site Developed by Eli Madden
Page ID: 1351
IP: 44.201.99.222