What's Up With the Exploding Toads?

In the spring of 2005, toads in Germany and Denmark started to explode. For days it baffled scientists as more than 1,000 toad bodies appeared dead and popped. It was alarming to local residents, as the exploding seemed to be happening at night, each with a loud pop. There were no chemicals or viruses found in the waters and it only seemed to affect toads, not frogs or fish. A veterinarian from Berlin discovered that all the dead toads seemed to have similar cuts across their middles.

Then scientists discovered the culprit -- crows. Some crows discovered that they liked the taste of toad livers. Crows learned the hunting technique from other crows and soon the toads were under siege. The toads, trying to frighten off the aggressive predators puffed themselves up. The result was a body popping death epidemic.

Off site resource from Discover: http://discovermagazine.com/2006/jan/zoology 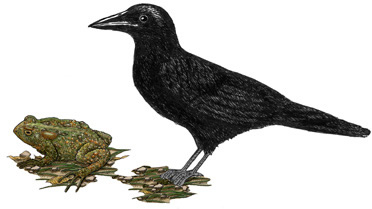 LS4.C: Adaptation: LINK
• Adaptation by natural selection acting over generations is one important process by which species change over time in response to changes in environmental conditions. Traits that support successful survival and reproduction in the new environment become more common; those that do not become less common. Thus, the distribution of traits in a population changes. (MS-LS4-6)

Scientific Knowledge is Based on Empirical Evidence

• Science knowledge is based upon logical and conceptual connections between evidence and explanations. (MS-LS4-1)

How to Intergrate this Lesson with NGSS:

• Discuss them as a class.

©2005-2022 Sheri Amsel. All rights reserved.
The material on this site may not be reproduced, distributed, transmitted, cached or otherwise used for anything other than free educational use. It is not to be used for sale or profit of any kind. If you are unsure whether your use of site materials violates the exploringnature.org copyright, contact Sheri Amsel for prior written permission at sheri@exploringnature.org. Thank you for respecting copyright laws.
Site Developed by Eli Madden
Page ID: 1660
IP: 34.231.21.105