They are found in the southern region of the western Canadian provinces (BC, Alberta, and Saskatchewan), south through the western coast of the US and Mexico. They are also locally found in the Rockies in Montana.

They roost in rocky cliffs near waterways where insects breed. They may also roost under bridges, in caves, mines, and abandoned buildings. They usually roost alone, but do gather in large groups in colder weather.

They are about 3.5 inches long (85 mm). Their wingspan is up to 9.5 inches (245 mm). Females are larger than males. Their fur is tan to yellow with a lighter underside. They have a dark face, ears, and forearms. Their ears are relatively large at more than half an inch long (16 mm). They also have a thin tragus that is about half as tall as the ear. Their feet have a spur (called a keeled calcar).

Females roost alone or in a small maternal group. Generally, they are solitary roosters and they change roosts sites as needed. They come out at sunset to hunt. They can hunt visually in the light and using echolocation after dark. They are seen during day light hours occasionally.

Because of their habit of emerging in daylight, they are eaten by jays.

They mate in the fall, but females store the sperm until spring (June - July in their northern range) when they become pregnant for about 1-2 months (gestation). They have 1-2 offspring (pup) but commonly just one. They nurse the pups for about five weeks.

Their lifespan is unknown.They are considered least concern by the IUCN List, but are threatened in some places by pesticides, damming of their insect-breeding streams, and habitat loss. They are endangered in their temperate North American range from white nose syndrome, a fungal infection that wakes them from hibernation, using all their reserve energy before their food source is available. 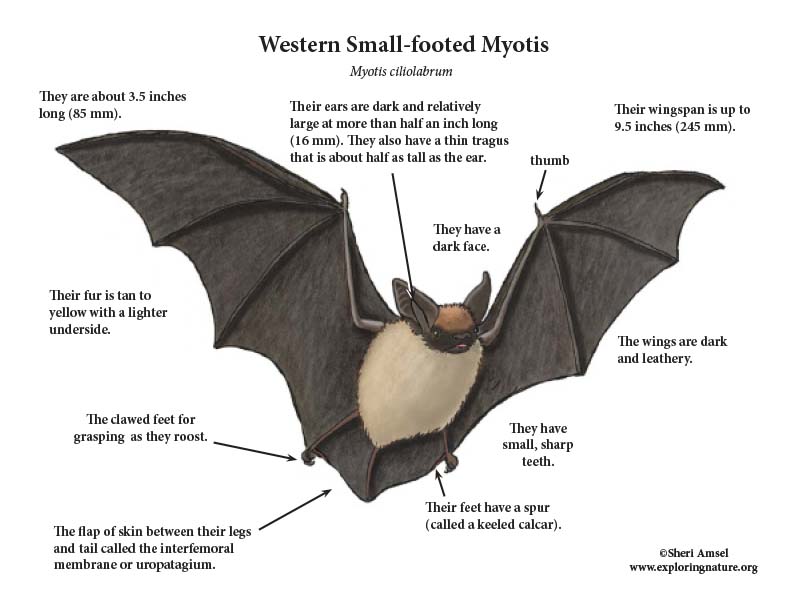 ©2005-2023 Sheri Amsel. All rights reserved.
The material on this site may not be reproduced, distributed, transmitted, cached or otherwise used for anything other than free educational use. It is not to be used for sale or profit of any kind. If you are unsure whether your use of site materials violates the exploringnature.org copyright, contact Sheri Amsel for prior written permission at sheri@exploringnature.org. Thank you for respecting copyright laws.
Site Developed by Eli Madden
Page ID: 6464
IP: 3.236.70.233