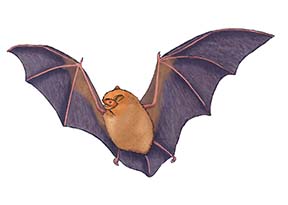 They are found in Western North America, from British Columbia, Canada south into Mexico, Central, and South America all the way to Argentina. Also found on some islands off the coast of South America (Trinidad, Tobago, Galapagos, etc.)

They roost (sleep during the day) in thick leafy forests of willows, cottonwoods, etc. near streams. They can also be found in more suburban parks and sometimes in caves.

They are about 4 inches long (100 mm). Their wingspan is about 1.5 inches (40mm). Their fur is reddish in color with no frosting. Their nose (rostrum) is short. Their ears are small and rounded. They have a prominent tragus in each ear. There is a flap of skin that stretched between the legs and tail called the uropatagium. Their tail does not extend beyond that.

They may migrate to warmer climates in winter or may hibernate in the leaf litter during the coldest months when insects are scarce. In summer they roost in the thick leaves of deciduous trees.

They use echolocation to locate and catch prey in the dark and fly in darkness. Echolocation is a kind of radar that uses the bat’s high-pitched calls to bounce off objects. They can actually “see” what is around them by how their calls bounce off their surroundings.

They eat insects throughout the night, changing insect species as each emerges in their own nightly feeding habits. It is thought that about a quarter of their diet are moths. Their diet makes them an important pest control partner for humans.

They are eaten by opossums, owls, and falcons. They are also attacked by more aggressive birds (jays) and house cats. Their roosting sites, in the lower branches of trees, also make them vulnerable to roadrunners.

They mate in the fall, but females store the sperm until spring when they become pregnant for about 3 months (gestation). They can have up to five young (pups), but average three. They feed them milk until they are almost adult sized and can begin to fly to can chase insects for themselves.

Their lifespan is known. They are considered “least concern” by the IUCN Red List. 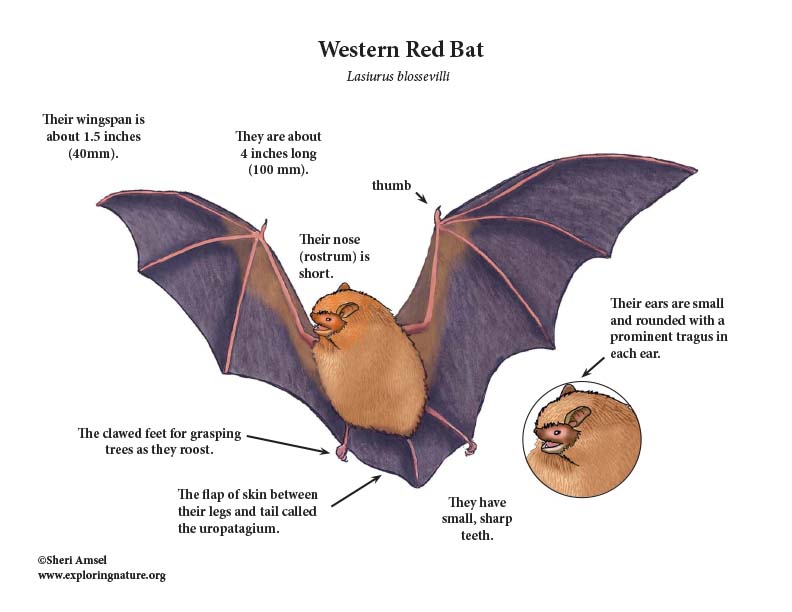 ©2005-2023 Sheri Amsel. All rights reserved.
The material on this site may not be reproduced, distributed, transmitted, cached or otherwise used for anything other than free educational use. It is not to be used for sale or profit of any kind. If you are unsure whether your use of site materials violates the exploringnature.org copyright, contact Sheri Amsel for prior written permission at sheri@exploringnature.org. Thank you for respecting copyright laws.
Site Developed by Eli Madden
Page ID: 6461
IP: 3.236.70.233