In 1884, the beautiful water hyacinth, a native flower of South America, was first seen in the U.S. at an ornamental plant exposition in New Orleans.

A visitor from Florida took a cutting and brought it home to their garden pond and within weeks found it had taken over the pond. Thinking only to get rid of the troublesome plant they pitched it into the St. John's River. This began a battle that has raged for the last century to beat back this aggressive plant.

The water hyacinth grows at a remarkable rate. Floating on lakes, ponds, rivers, marshes, and other types of wetland habitats, it spreads with great speed forming thick floating mats of vegetation. This blocks light to the underwater environment preventing oxygen production needed for the life in all waterways. This resulted in dying lakes and ponds and rivers becoming impassable to boats.

Concerned people tried to chop up or burn the plants only to find that each small piece started a new plant! They introduced grazing manatees, but the plants grew too fast. Finally, into the 1960s when water hyacinth had spread to several southern states, people started spraying it with herbicides. This did have a preventive effect, but at what cost to the water quality and life in and around the waterways? No one will ever know the true cost of this beautiful and dangerous plant. In the past 25 years, scientists have introduced a series of insects that feed on the water hyacinth in its native environment. Though this may eventually create a balance with the water hyacinth, people do wonder what other plants those newly introduced insects might like to eat? 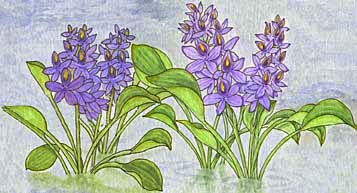 ©2005-2022 Sheri Amsel. All rights reserved.
The material on this site may not be reproduced, distributed, transmitted, cached or otherwise used for anything other than free educational use. It is not to be used for sale or profit of any kind. If you are unsure whether your use of site materials violates the exploringnature.org copyright, contact Sheri Amsel for prior written permission at sheri@exploringnature.org. Thank you for respecting copyright laws.
Site Developed by Eli Madden
Page ID: 1629
IP: 34.229.119.176