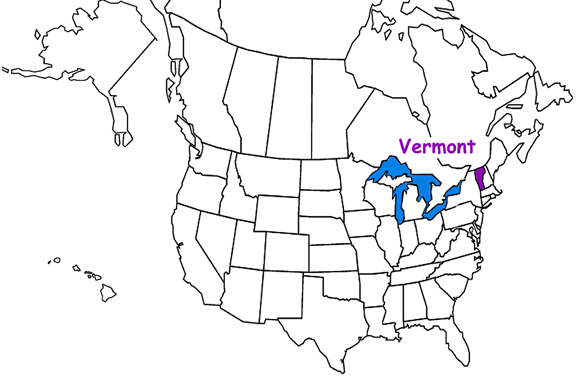 Forest
More than 75% of Vermont is covered in forest which is more than 4.6 million acres of temperate broadleaf and mixed forests - also called New England-Acadian forests. While Vermont's Green Mountains fit this description with conifers and northern hardwoods, the southwest corner of the state and parts of the Connecticut River are covered by what are called northeastern coastal forests of mixed oak species. Lake Champlain marks Vermont's western border and the forests along the lake are eastern Great Lakes lowland forest.
Vermont's forests are home to many native plants and animals and are also important recreation sites. They also provide important economic resources like maple sugaring, lumber and firewood harvest, etc. Two hundred years ago, much of Vermont was cleared for farming, but the forest has reclaimed the state and only small bands of farmland along the state’s major rivers, and occasional “hill farms” break the forest cover.

Wetlands
We now know that wetlands are important, providing habitat to native plants and animals, flood and erosion protection, nutrient and pollution filtration, groundwater recharging, and sites for education and recreation. Unfortunately, much of our wetlands nationally were destroyed before we realized their importance. This is true even for Vermont, that has lost 50% of its wetlands to "draining, dredging, filling, or excavation activities associated with industrial, residential, and agricultural activities." Less than 5% of Vermont is made up of wetlands today.
Vermont 's wetlands provide food and habitat for waterfowl like ducks, mergansers, loons and wading birds like herons, bitterns and egrets. It's also home to mammals like, black bear, moose, mink, otter, and beaver. Also amphibians like frogs, toads and salamanders and reptiles like turtles and snakes and skinks. Wetlands also provide habitat for interesting plants like jack-in-the-pulpit, pitcher plants, and sundews.

The Champlain Valley is lower in elevation and warmer throughout the year than the rest of Vermont and its soils, climate, and vegetation have more in common with the Great Lakes lowlands and St. Lawrence Valley of New York than the Green Mountains. There is an extensive wetland bordering the lake providing habitat for waterfowl, wading and other migrating birds as well as turtles, amphibians and mammals like mink and beaver. Above the wetlands are agricultural fields and then adjacent forest where many animals like wild turkey, deer, fox, hawks, owls, rodents, and songbirds make a living.
The Taconic Mountains were formed by glacial action and are rich with underground sources of freshwater and rich soil. The mountains yielded slate and other stone while the  lower slopes provided rich oak-hickory forests and northern hardwood forests as well as fertile agricultural lands to early settlers. The forests are good habitat to black bear, deer, bobcat, amphibian, bats and birds.
The Vermont Valley is a narrow region between Vermont's two mountain ranges - the Green Mountains to the east and the Taconic Mountains to the west. The valley is the start of two major rivers: Otter Creek and the Batten Kill, where there are many wetlands including fens and swamps. Despite being highly developed by people, who have harvested much of the forest, the valley is home to mammals, birds and amphibians.

The Northern Green Mountains are part of the Appalachian Mountain system and includes Mount Mansfield and Camel's Hump. These mountains are covered with northern hardwood forests and, at higher elevations, Montane spruce, birch and fir and then higher boreal communities. The high elevations and cold temperatures make this region poor for farming, so few settlers disturbed the area early on. They have since been developed as ski areas, though still are the least populated areas of the state in part because of the large tracts of public land, like the Green Mountain National Forest, Mount Mansfield, Camel’s Hump, and Putnam State Forests and Green River Reservoir State Park.

The Southern Green Mountains are also part of the Appalachian mountain chain with high peaks and a high plateau. There are also low foothills to the east and a distinct 1,500 foot escarpment marking the western border. The peaks here are lower than the Northern Green Mountains and there is a high plateau covered in wetlands of conifer swamp and beaver meadows. The many rivers here drain into the Connecticut River. The forests are northern hardwood at lower elevations and, as you climb higher into the mountains, turn into montane spruce-fir. These forests and wetlands are some of the best wild habitat left in Vermont so are home to a rich cross-section of Vermont wildlife.

The Northern Vermont Piedmont is hilly with lakes, rivers and wetlands. The forests are northern hardwood and hemlock. The wetlands are fens and northern white cedar swamps with some floodplain forests. This region is highly developed with many roads creating a fragmented wild habitat. This is not good for large mammals that need larger territory, though deer, moose, coyote, beaver, fox, mink, otter, and wild turkey can all be found there.

The Southern Vermont Piedmont is made up of gentle rolling hills and many streams and rivers - the largest being the Connecticut River. The Connecticut River Valley was used  by Native Americans and then European settlers as it provided a milder climate. There are northern hardwood and mixed forests providing good habitat for mammals, birds and amphibians like red-backed and spotted salamanders.

The Northeastern Highlands, also called the Northeast Kingdom is a cold, remote area of Vermont. The landscape here was greatly affected by the retreat of the glaciers with eskers, kettleholes and glacial erratics scattered among the hills and mountains. The Connecticut River flows through this region providing a river valley with floodplains, wetlands and oxbow lakes. The forests are more boreal in this cold region, though hardwood forests do occur. The animals here are found in more northern habitats like the gray jay and spruce grouse, but bear, bobcat, deer, moose, beaver, mink, otter and fisher are all present here as well.

For more information about Vermont's Natural Communities go to: LINK 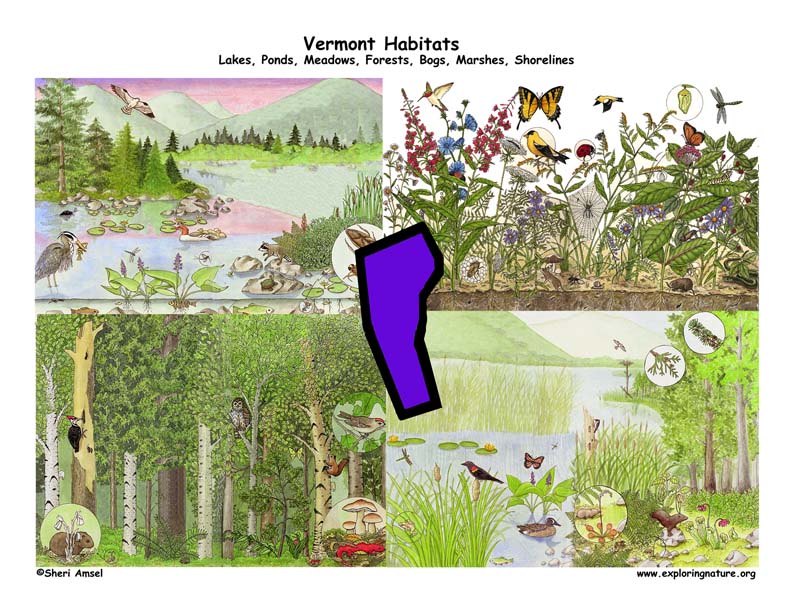 For more about Vermont's mammals (including Latin names) click on individual animal links or for another (off-site) resource: LINK 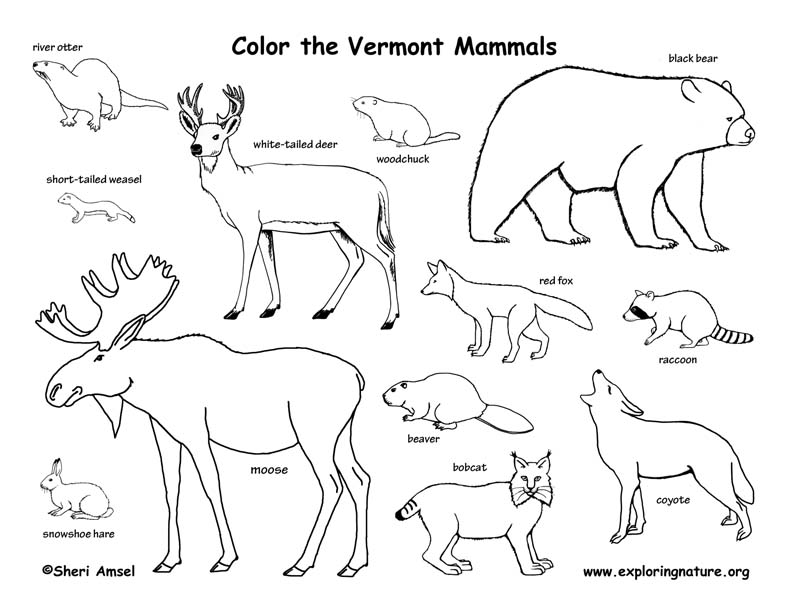 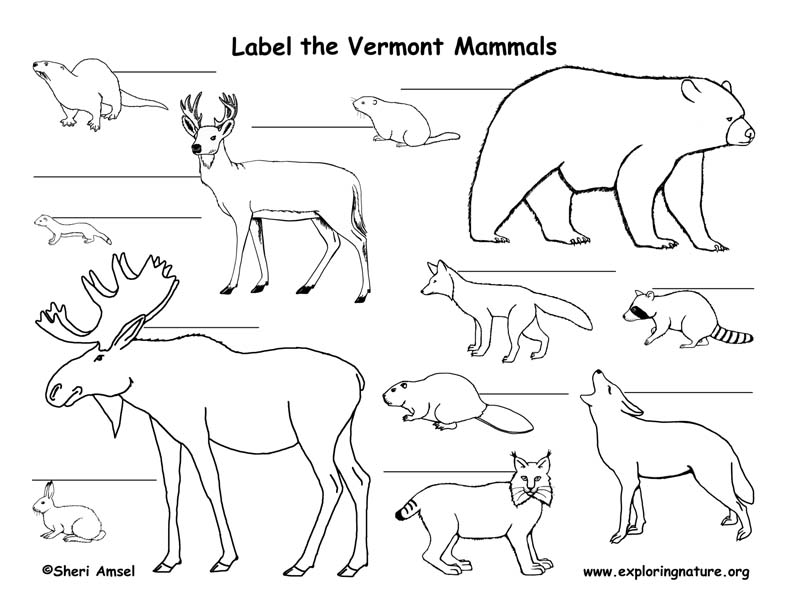 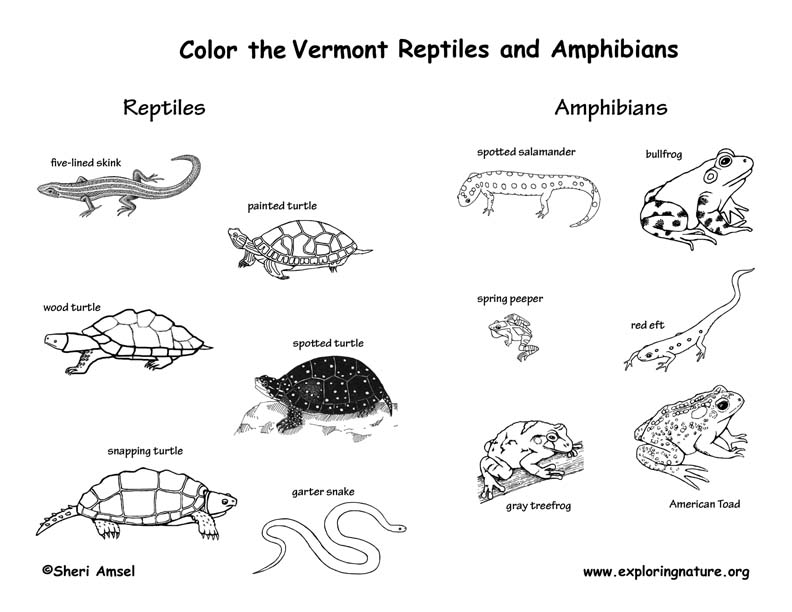 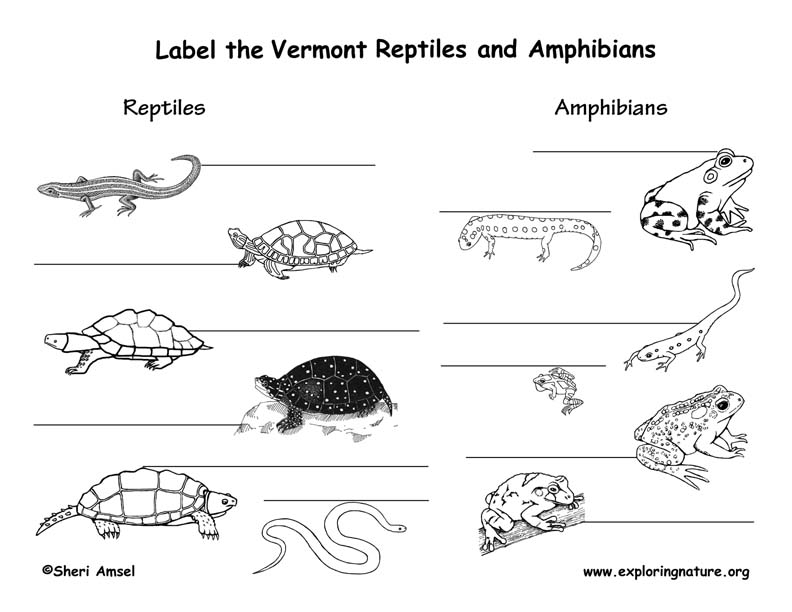 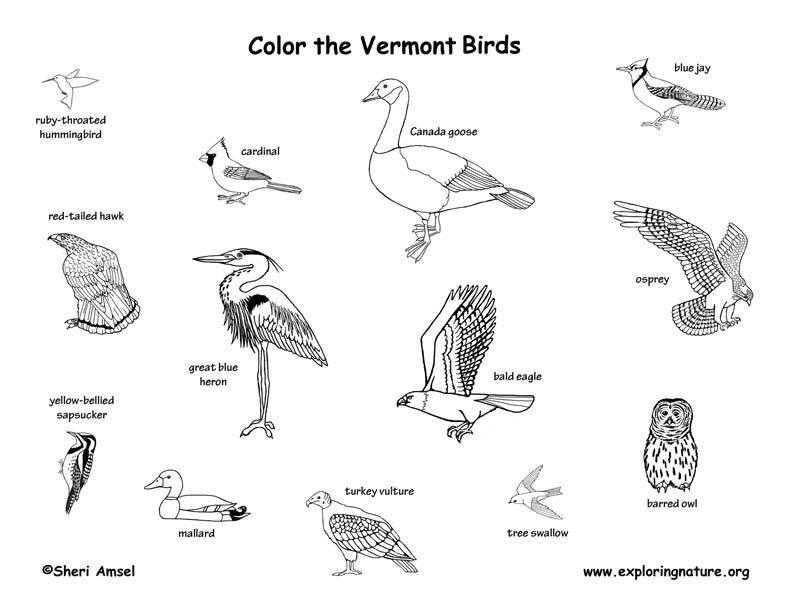 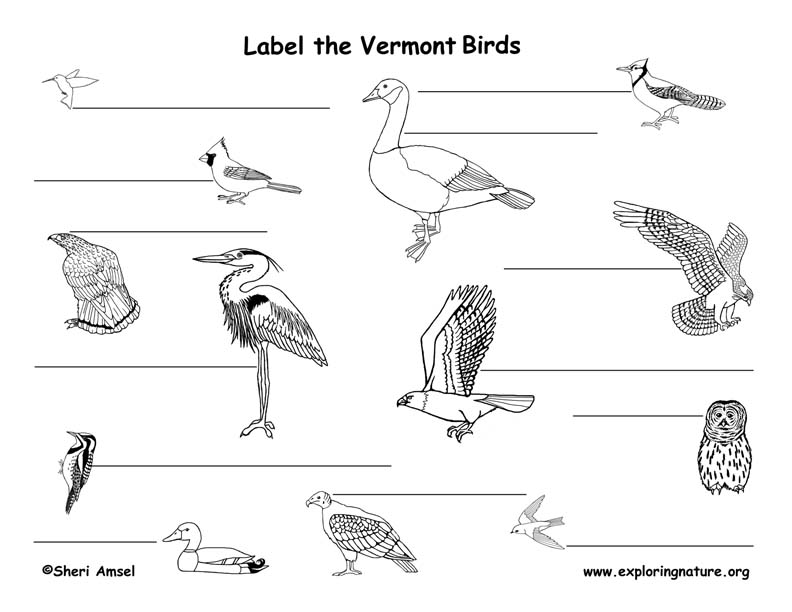 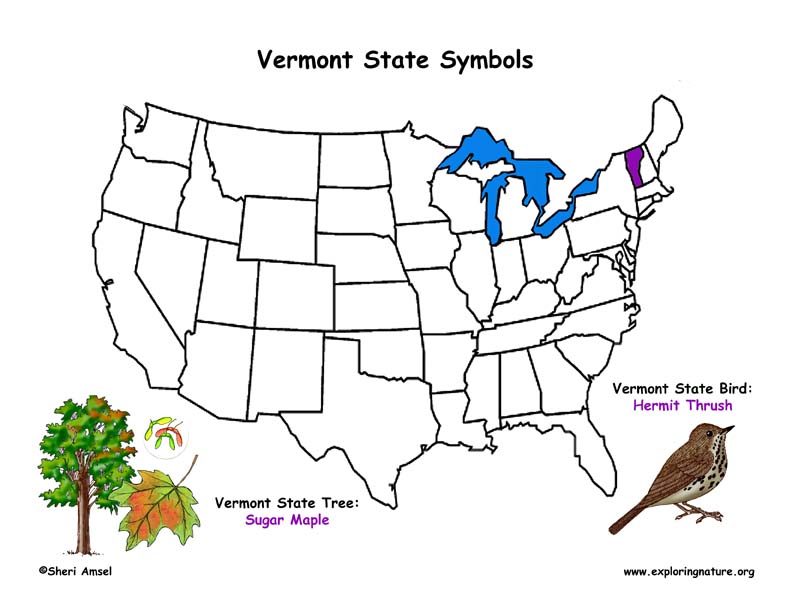 ©2005-2023 Sheri Amsel. All rights reserved.
The material on this site may not be reproduced, distributed, transmitted, cached or otherwise used for anything other than free educational use. It is not to be used for sale or profit of any kind. If you are unsure whether your use of site materials violates the exploringnature.org copyright, contact Sheri Amsel for prior written permission at sheri@exploringnature.org. Thank you for respecting copyright laws.
Site Developed by Eli Madden
Page ID: 809
IP: 35.173.35.14