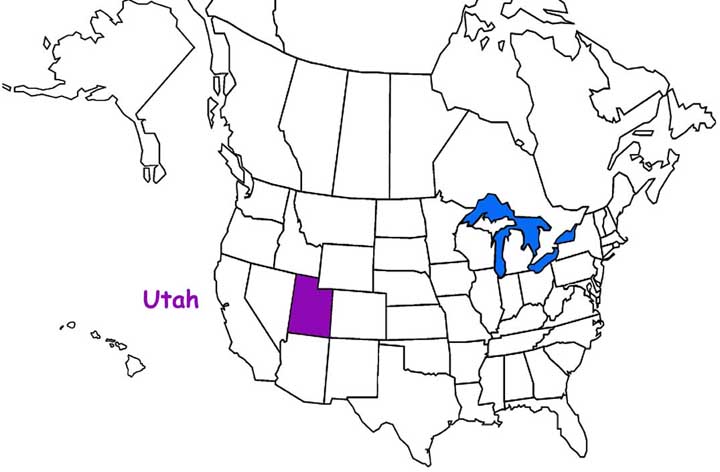 Utah is a scenic state with some of the most stunning scenery in North America. It is a very dry state with the majority of its habitat being desert. Southwestern Utah dips into the Mojave Desert – one of North America's hottest and driest deserts. The Mojave's dry mountain terrain gets less than 8 inches of rain fall per year (with no snowfall) and can reach up to 115° in the summer. The living things here must be well adapted to the hot, dry conditions. Cacti, creosote bush, sage and the rare yucca – Joshua tree all are found here as well as gila monsters, desert tortoises, snakes, roadrunners, kangaroo rats, scorpions, bats and kit foxes.
The Great Basin desert is the largest desert in the U.S. covering almost 200,000 square miles. It is a cold desert with more than half its scant precipitation coming as winter snow. It has conifer forest covered mountains reaching up to 8,000 feet tall, alkaline flats, lifeless playas, sand dunes, salt lakes, some rare marsh areas and sagebrush steppes (covering almost half of it). The sagebrush provides food for mule deer, pronghorn antelope, sage grouse, and pygmy rabbits and shelter for small birds and lizards. The Great Basin desert has many predators – coyotes, gray fox, mountain lion, hawks, eagles and burrowing owls. Some prey animals include jackrabbits, kangaroo rats, chukar partridge, small birds and waterfowl.
The Colorado Plateau runs across four states (Arizona, Colorado, New Mexico, and Utah) with stunning natural arches, pinnacles, and domes. It is a high plateau reaching 12,000 feet in places. It has varied habitats from conifer forests to salt deserts. The sagebrush, juniper, and pinyon provides food and shelter for mule deer, bighorn sheep, jackrabbit and collared lizards that in turn provide food for coyotes, bobcat, mountain lions, rattlesnakes, peregrine falcons and Mexican spotted owls. Animals less well adapted for the desert like beaver, frogs, snails, garter snakes and dragonflies live along steams and rivers of the Colorado Plateau.


Wetlands
Wetlands are very rare in Utah covering just 1/5 of 1 percent of the state. They include some marshes bordering lakes, rivers and streams and temporary spring snow melts. Wetlands are important habitat for native wildlife and migrating birds and protect recreational waterways and water quality. Yet they are disappearing due to human activities – increased water use, development, gas and oil withdrawal, pollution, agriculture and invasive species like tamarisk. The Utah Division of Wildlife Resources is working actively to restore Utah's wetlands and educate the public about their importance.

Grasslands
Utah does not have abundant grasslands because of its dry climate, but about 3.5% of the state does have shortgrass prairie. These dry grasslands are home to wildlife like hawks, pronghorn antelopes, prairie dogs and the endangered black-footed ferret. Much of Utah's prairie was lost to human development and grazing, though there is an effort to protect and reclaim Utah's scarce grasslands. At higher altitudes, where there is more precipitation, there are mountain meadows which provide food for many animals like deer, bear, hawks, rodents, bats, shrews, frogs and salamanders.

Forest
Utah is a dry state with forests adapted for arid habitat. The pinyon-juniper woodlands are on dry, rocky terrain in Utah's foothills. These trees rarely reach more than 30 feet tall. Underneath them sagebrush, rabbitbrush and prickly pear cactus grow. Up higher there is more rain, so larger trees like ponderosa pine and gambel's oak can grow. Still higher (at about 8,500 feet) the Douglas fir, white fir, limber pine, and blue spruce grow in a thick forest canopy. Aspen forests also grow at this level and higher in thick groves. They cover about 3% of the state mostly at higher elevations. Higher still (9,500) there are forests of Englemann spruce and subalpine fir. Because of the long months of snow cover there is more moisture but a very short growing season. Utah's mountain summits are cold and windswept. Surrounding the open alpine tops are bristlecone pines twisted and stunted from wind and cold. The alpine tops reach 11,500 and are treeless. Only rugged alpine plants can survive the cold and exposure at this height.

Shrubsteppe
Shrubsteppes cover 13 % of Utah. These are dry, rugged, treeless expanses are covered in tough vegetation like sagebrush, needle grass, rabbit brush, juniper and pinyon. Despite the inhospitable habitat there are many animals that make their home on these steppes, like the sage-grouse, pygmy rabbit, mule deer, sage thrasher and sparrow. Shrubsteppe habitat is also being lost to  developed, gas and oil extraction, over grazing and off road vehicle use. 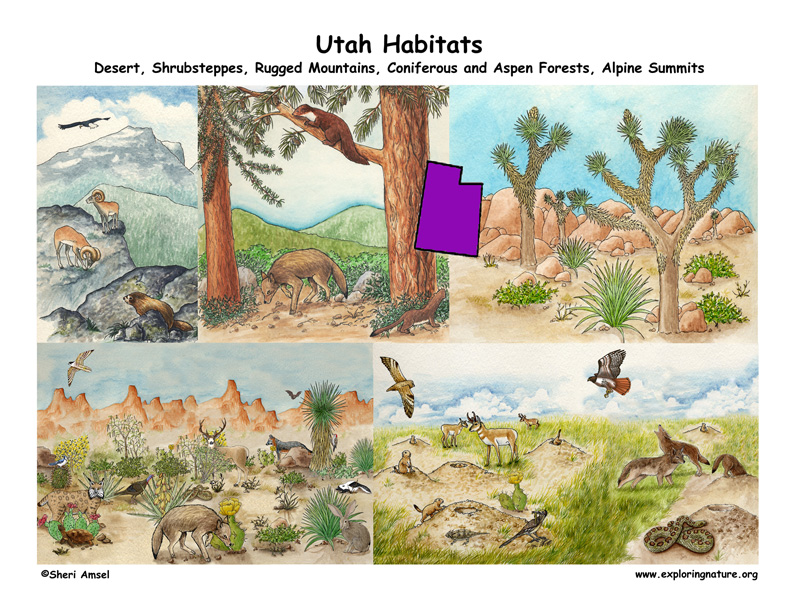 
For more information about Utah's mammals (including Latin names) click on individual animal links or for another (off-site) resource: LINK 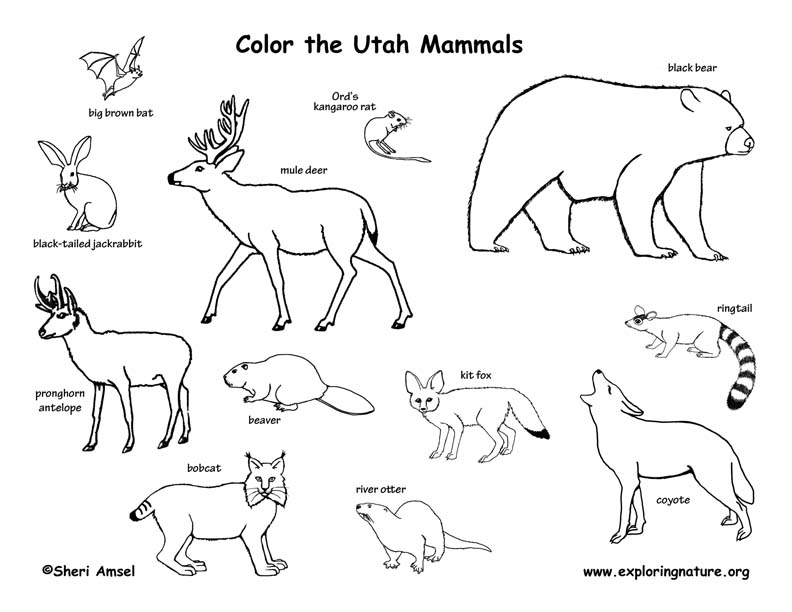 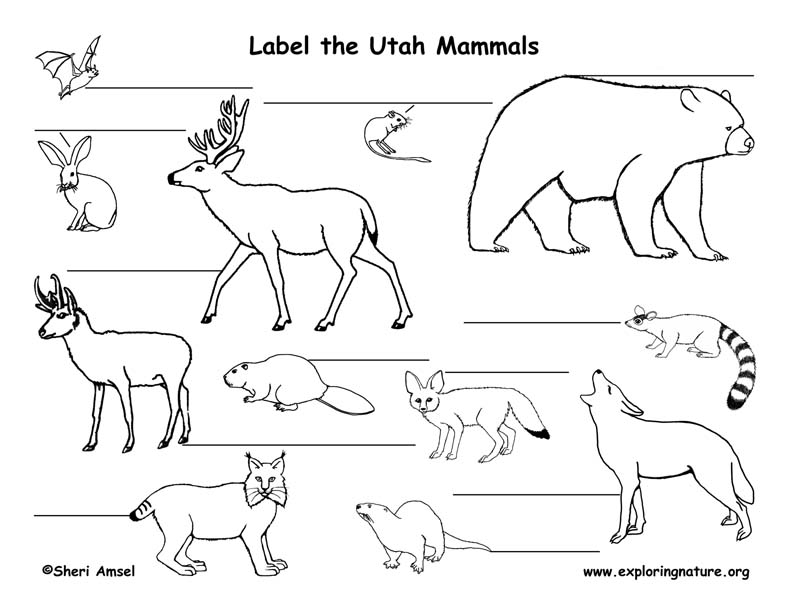 For more information about Utah's amphibians (including Latin names) click on individual animal links or for another (off-site) resource: LINK

For more information about Utah's reptiles (including Latin names) click on individual animal links or for another (off-site) resource: LINK 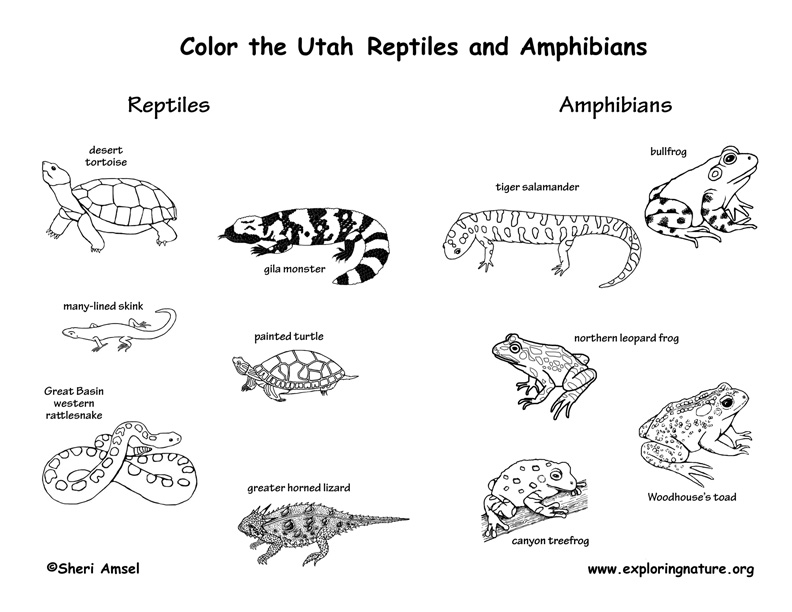 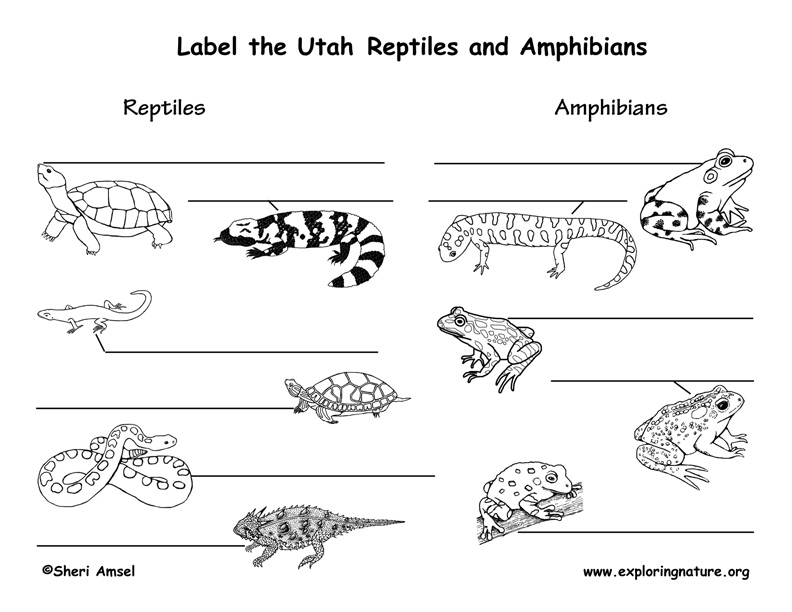 For more information about Utah's birds (including Latin names) click on individual animal links or for another (off-site) resource: LINK 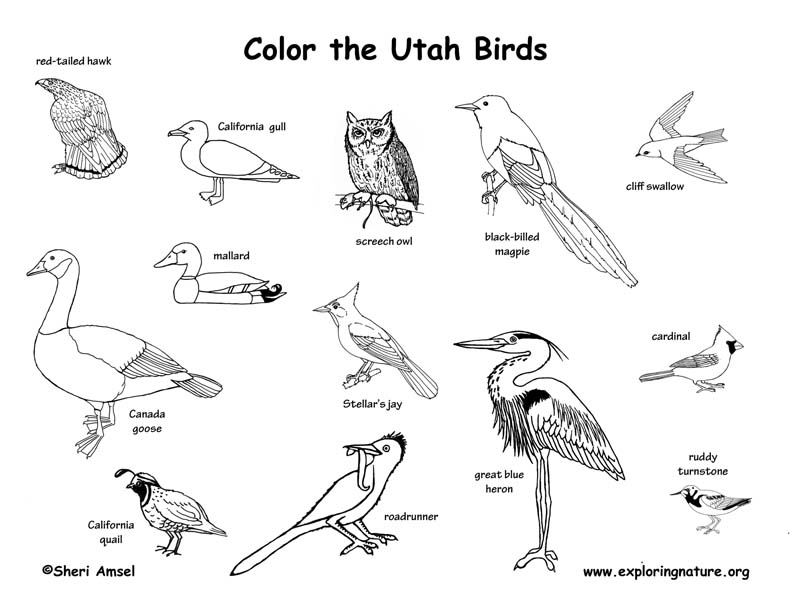 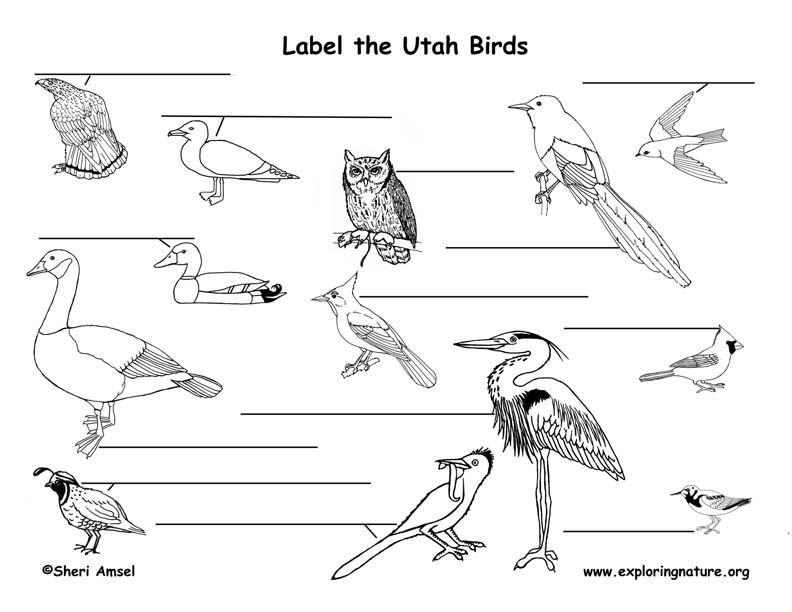 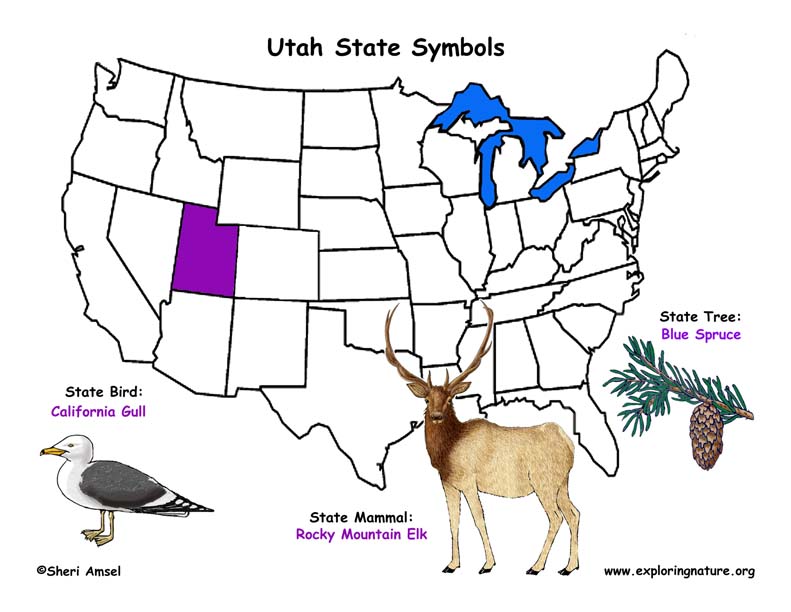 ©2005-2023 Sheri Amsel. All rights reserved.
The material on this site may not be reproduced, distributed, transmitted, cached or otherwise used for anything other than free educational use. It is not to be used for sale or profit of any kind. If you are unsure whether your use of site materials violates the exploringnature.org copyright, contact Sheri Amsel for prior written permission at sheri@exploringnature.org. Thank you for respecting copyright laws.
Site Developed by Eli Madden
Page ID: 825
IP: 35.173.35.14