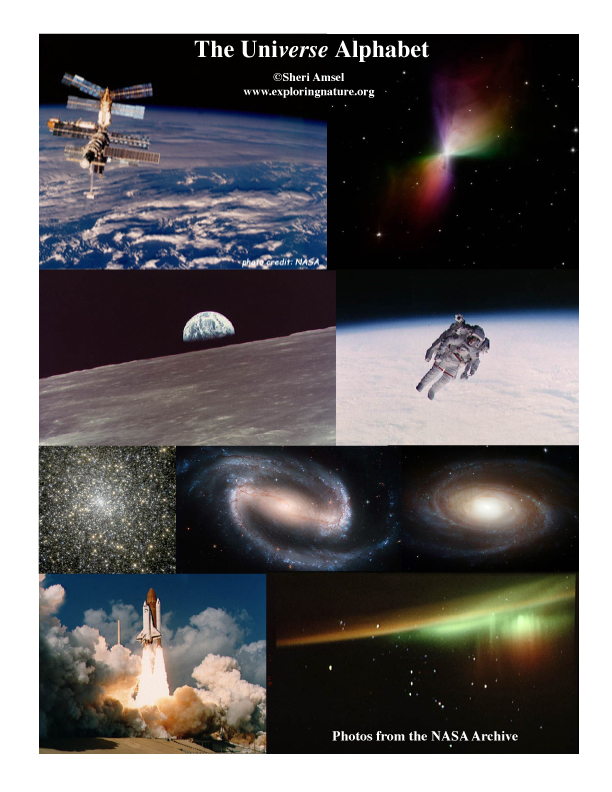 The verse below is  followed by a picture book version. It can be printed out using the high resolution PDF at bottom.

To make this resource apropriate for the common core, students can research how each stanza is scientifically accurate with a vocabulary webquest. See the webquest questions following the picture book and the PDF for printing it out.

A is for asteroid pieces of planet,
exploded in space leaving iron and granite.

B is for black hole sucking in light,
a star that’s collapsed on itself into night.

C is for craters on the moon after dark,
scraped out by meteors leaving their mark.

D is for dipper, a bright constellation,
stars in the sky in a ladle formation.

E is for Earth, a planet in motion,
one quarter land and three quarters ocean.

F is for fog made of clouds moist and white,
that sink to the Earth on a warm, rainy night.

G is for gravity, pulling to Earth,
without it we’d have to wear anchors from birth.

H is for Hubble launched from our planet,
a telescope out there with no one to man it.

I is for Io, said Galileo,
Jupiter’s moon with an active volcano.

J is for Jupiter’s swirling cloud masses,
thick and quite toxic with hydrogen gasses.

K is for Kepler who watched worlds in motion,
and studied their orbits with stellar devotion.

L is for lunar eclipse seen at night,
the earth blocks the sun and the moon hides from sight.

M is for milky way in the night sky,
Our own glowing galaxy seen by the eye.

N is for nebula, great clouds of gas,
surrounding a planet or dark stellar mass.

O for Orion, where new stars will grow,
our nebular neighbor, so hot it can glow.

P is for pulsar a bright neutron star,
that acts like a lighthouse and blinks from afar.

Q is for quasar, bright spot in the sky,
bursting with energy, no one knows why.

R is for rocket launching from base,
burning up fuel as it roars into space.

S is for Sirius, the famous Dog Star,
when looking at night, its the brightest by far.

T is for titan, a moon around Saturn,
hidden beneath a bright orange cloud pattern.

U is for Ursa, a galaxy spiral,
sending out light, it awaits our arrival.

V is for Venus a world of hot gases,
with belching volcanoes and thick, cloudy masses.

W is for waxing, a phase of the moon,
growing in size, it will be full quite soon.

X is for x-ray, an energy flow,
when matter’s sucked in to black holes, it’s let go.

Y is for Yeager, test pilot renown,
The first one to ever fly faster than sound.

Z is for zenith, highest point in the sky,
that’s where you find it, overhead, look up high.

*Thanks to NASA for use of their great photographs.

25 Things You Learned from This Universe Alphabet:

3. What made the craters on the moon?

5. What is the land water proportion of the Earth?

6. What is fog made of and how does it form?

7. What is gravity and how does it affect us?

8. What is the Hubble and who mans it?

10. Tell us something about the surface of Jupiter.

12. What is a lunar eclipse and would it be seen at night or during the day?

19. Tell us something about the moon titan.

20. Tell us something about the Ursa galaxy.

21.  Tell us something about the surface of  Venus.

24. For which acomplishment is Chuck Yeager famous?

25. What is the definition of zenith? 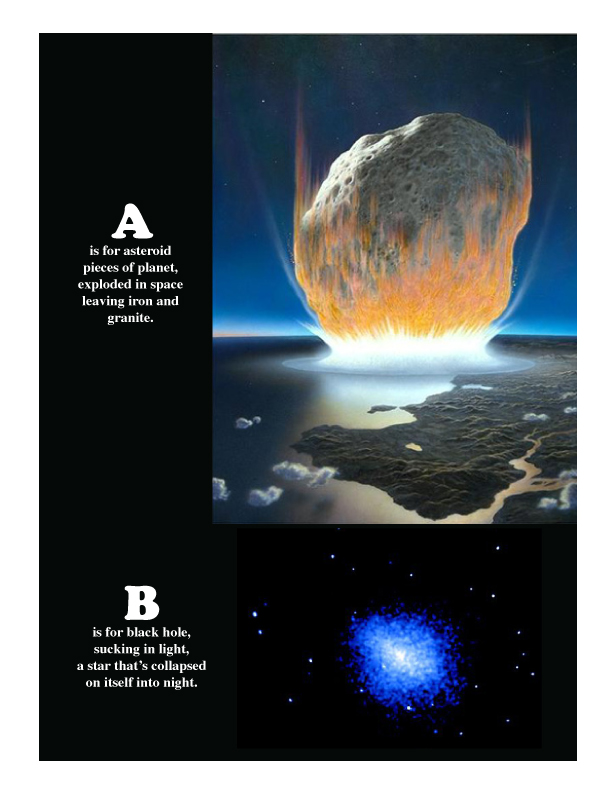 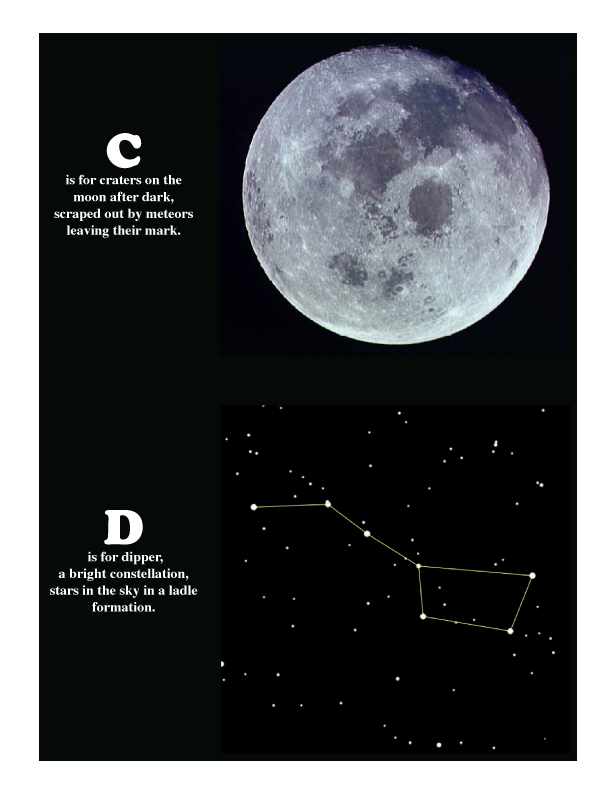 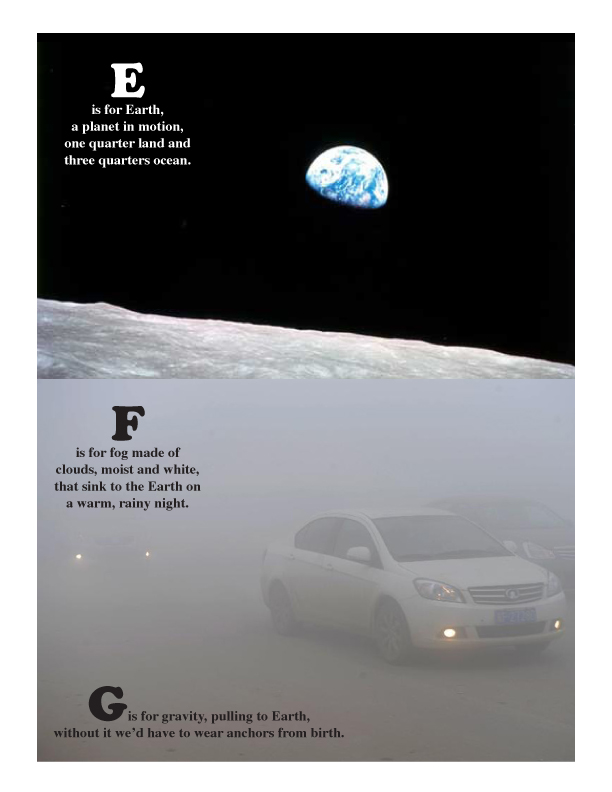 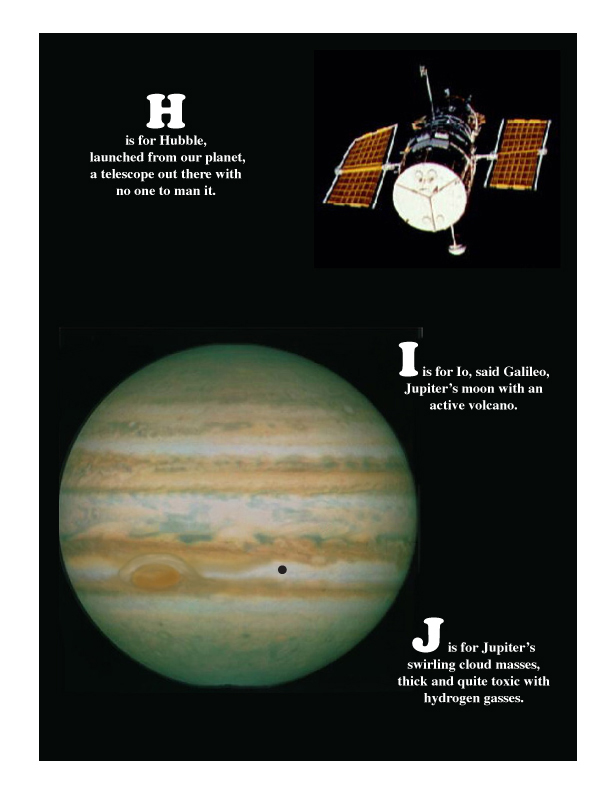 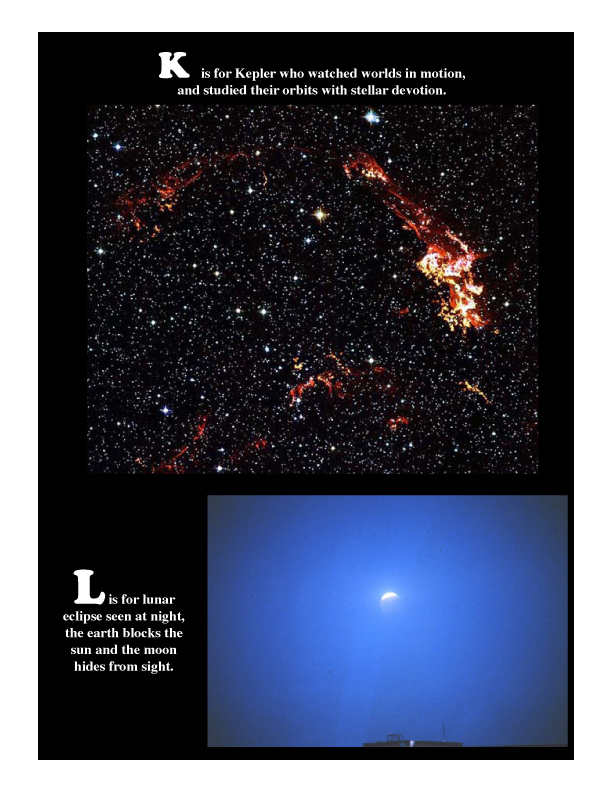 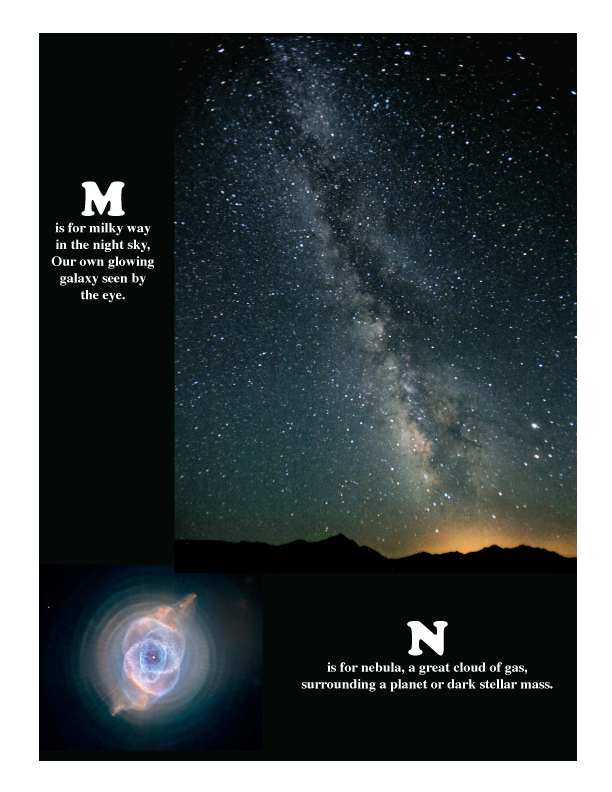 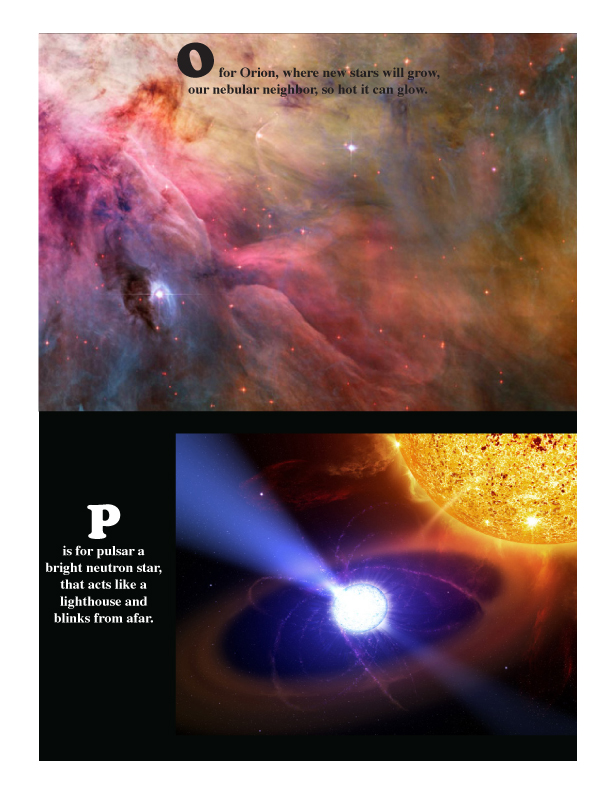 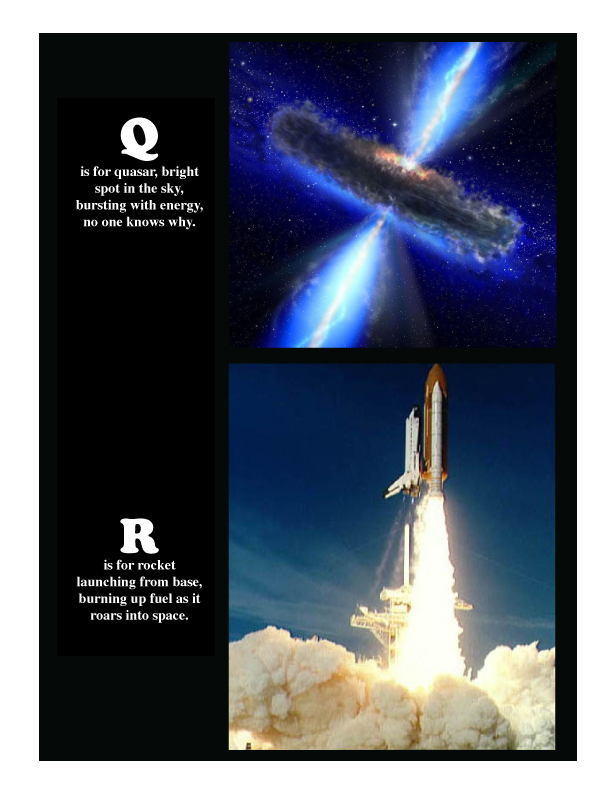 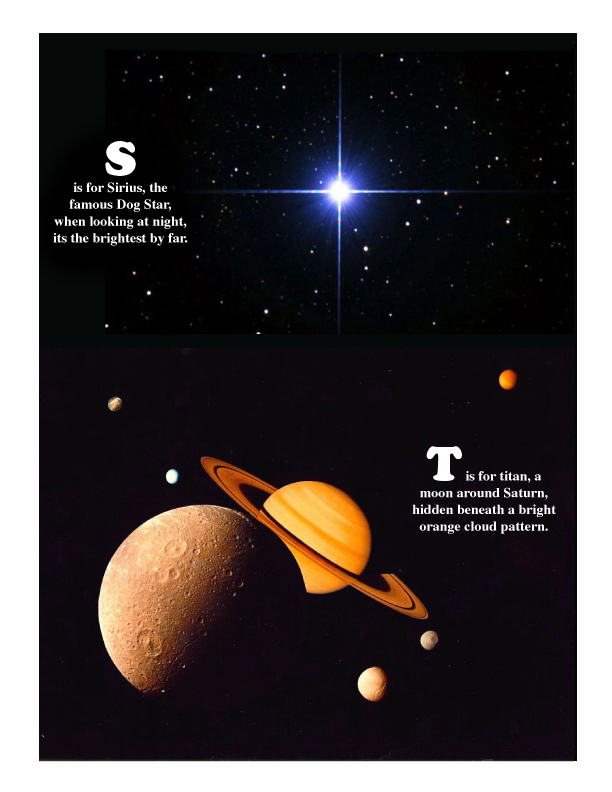 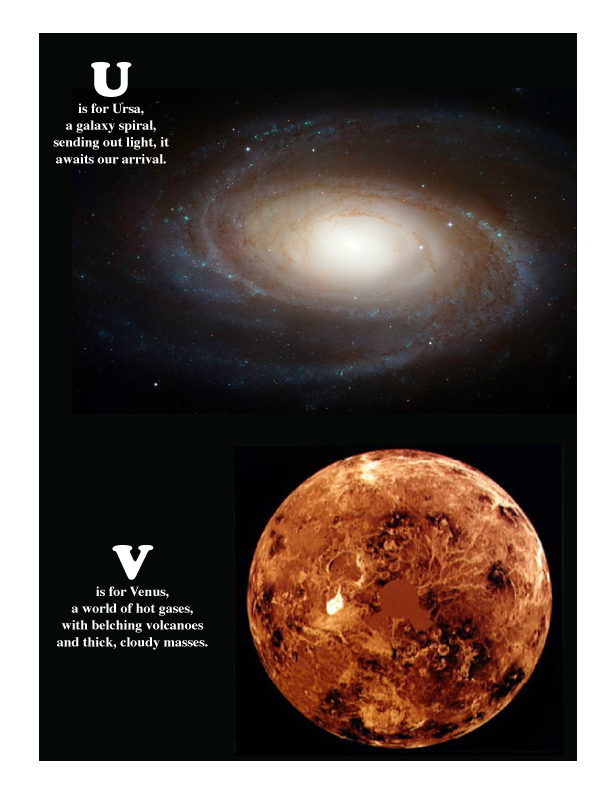 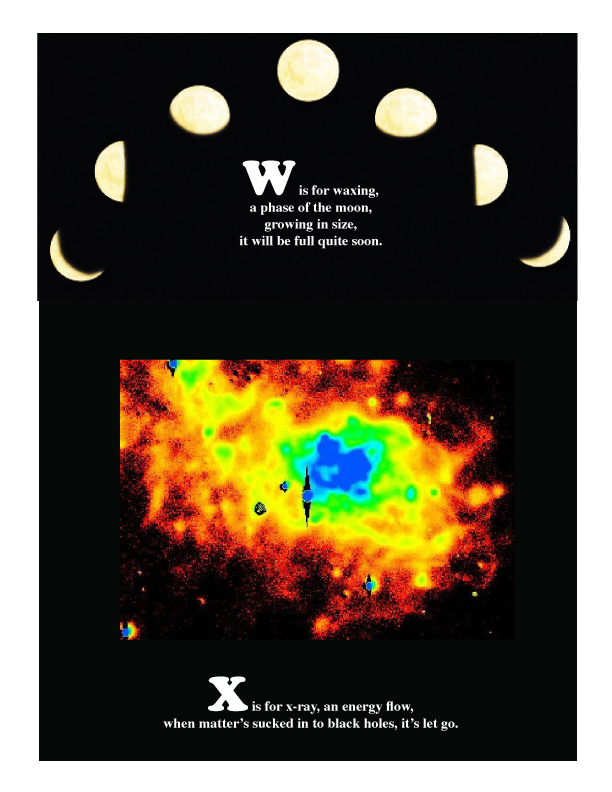 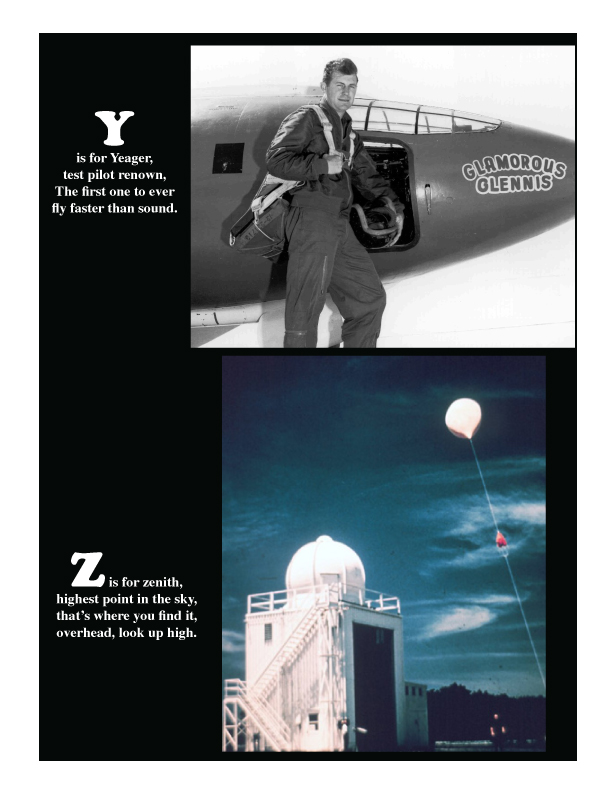 ©2005-2022 Sheri Amsel. All rights reserved.
The material on this site may not be reproduced, distributed, transmitted, cached or otherwise used for anything other than free educational use. It is not to be used for sale or profit of any kind. If you are unsure whether your use of site materials violates the exploringnature.org copyright, contact Sheri Amsel for prior written permission at sheri@exploringnature.org. Thank you for respecting copyright laws.
Site Developed by Eli Madden
Page ID: 1577
IP: 44.192.52.167