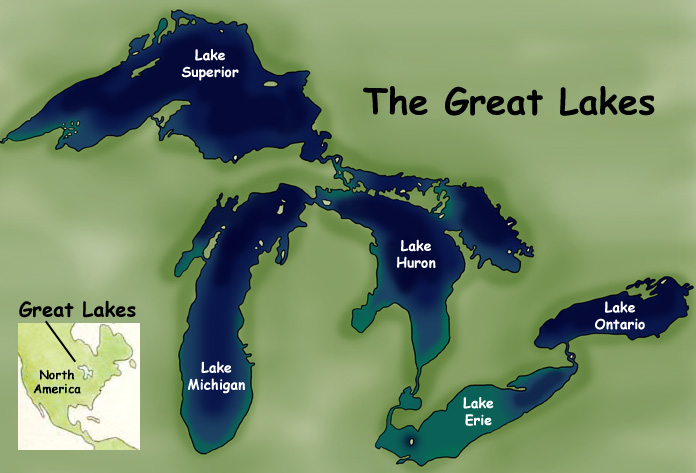 They cover an area of 94,000 square miles and span more than 750 miles (1,200 kilometers) from west to east. The Great Lakes chain has an extensive shoreline totaling almost 10,000 miles and includes more than 35,000 islands. They are the largest freshwater ecosystem on Earth, holding about 18% of the world's freshwater supply. Only the polar ice caps contain more freshwater than the Great Lakes. Though they are considered separate lakes, they are all interconnected and flow to the Atlantic Ocean through the St. Lawrence Seaway. Water flows from Lake Superior, through Lakes Michigan, Huron, Erie, Ontario and finally into the Seaway to the Atlantic Ocean. Each lake has its own unique characteristics and environmental issues.

Lake Superior is the largest Great Lake covering more than 30,000 square miles (82,000 square km). It is about 350 miles long (565 km) and the deepest lake – at more than 1,300 ft. It is the largest freshwater lake in the world and is so big, it could fit all the other Great Lakes inside it with room to spare. It contains more than 2,700 miles of shoreline including its many islands. Because Lake Superior is the furthest north, it has the coldest climate and more forested terrain. There is less farming and fewer cities so the lake absorbs fewer pollutants.

Lake Erie is slightly larger than Lake Ontario but is the shallowest lake averaging only about 60 feet deep. In overall volume, Lake Erie is actually the smallest Great Lake though it covers about 9,900 square miles (25,700 square km). It is 240 miles (386 km) long and has more than 870 miles of shoreline including its islands.

Lake Ontario covers only about 7,320 square miles (18,960 square km) but is quite deep – with an average depth of more than 280 feet (86 m) and its deepest point is more than 800 feet deep. Because of its great depth, Lake Ontario is the only Great Lake that does not freeze in winter. It is about 190 miles (310 km) long with more than 70 miles of shoreline including that of its islands.

St. Lawrence River/Seaway
The St. Lawrence Seaway allows the passage of deep-water ships between the Atlantic Ocean and the Great Lakes. In its modern form, it has a series of man-made canals, locks and dams to allow larger ships to pass. It is considered one of the most vital shipping routes on the planet along with the Panama Canal.

Despite their massive size, the Great Lakes are vulnerable to pollution.  Many large cities and agricultural lands line the shores of the lakes  in Canada and the U.S. – totaling about 35 million people – and depend  on this resource. Because of this, every year the Great Lakes absorb  leakage from land fills, run-off from farms – like fertilizer,  pesticides, herbicides and topsoil, sewage and waste from urban areas,  and industrial pollutants in the form of effluent leached into the water  directly or indirectly through acid rain. Acid rain forms when the  smoke from smokestacks mixes with rainwater and forms dilute acids that  fall with the rain or snow.

In addition, the amount of water that leaves the Great Lakes via rivers  and streams every year (called outflow) is small. So pollutants stay in  the lakes and build up over time. Plus lakes have a natural overturn  every spring and fall that does not allow pollutants to settle on the  bottom but repeatedly mixes them into the water.

Each lake has its own unique environmental issues depending on its size,  depth, outflow rate (called retention time) and development around its   shores.

Lake Superior may be the cleanest of the Great  Lakes because it is the largest and the furthest north. It has the least  amount of agriculture and industry surrounding its shores. It also has  an almost 200-year water retention rate!

Though its northern  side is relatively undeveloped, Lake Michigan's southern side supports  two large cities – Chicago and Milwaukee – which contain about 8 million  people. There are also paper mills that release waste into the lake.

Lake  Huron is a popular vacation lake, lined with summer homes and beaches.  It also has a feeder river (the Saginaw) that is surrounded by a rich  farm valley with several large cities. This brings pollutants into the  lake but also provides a valuable fishery.

Lake Erie has  suffered from pollution problems for decades from the many cities lining  its shores and made worse by its shallow water levels.

Lake Ontario has a very urban Canadian side, but is much deeper than Erie, so it can absorb more pollutants.

Overall, all the Great Lakes have had to pay attention to their water quality. 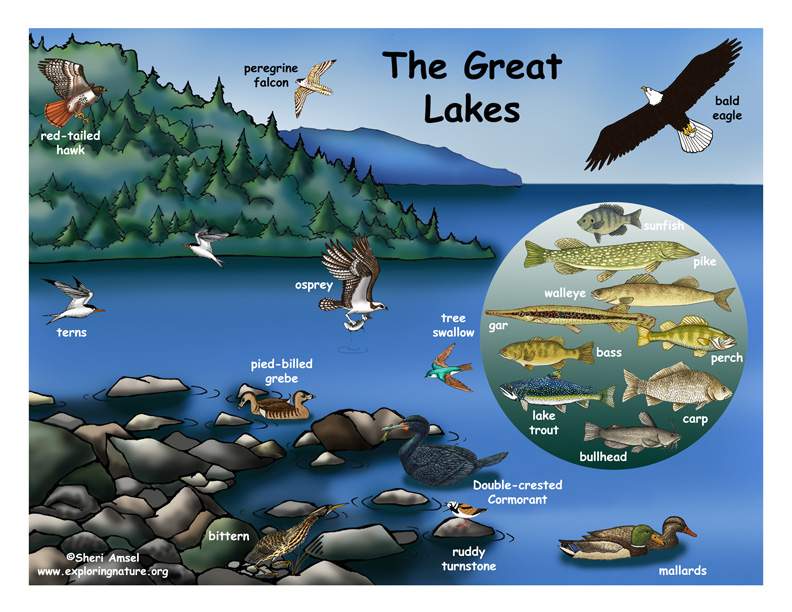 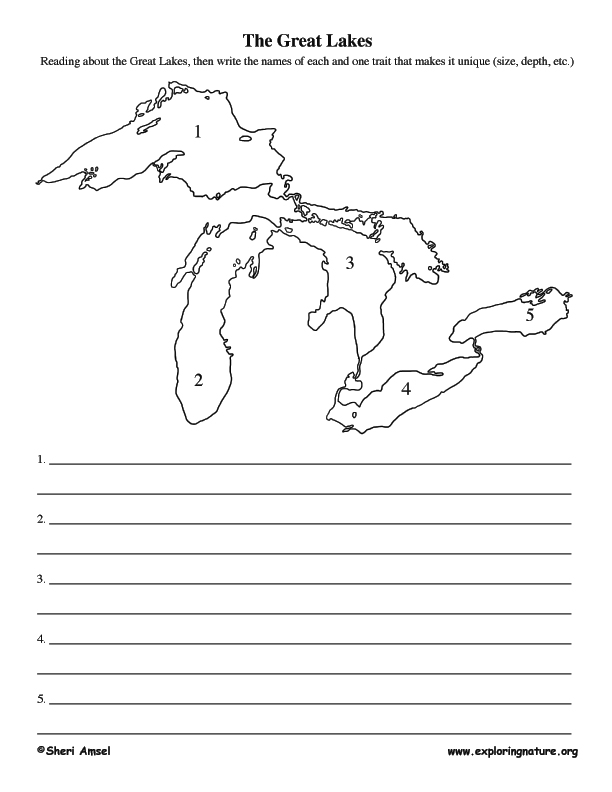 ©2005-2022 Sheri Amsel. All rights reserved.
The material on this site may not be reproduced, distributed, transmitted, cached or otherwise used for anything other than free educational use. It is not to be used for sale or profit of any kind. If you are unsure whether your use of site materials violates the exploringnature.org copyright, contact Sheri Amsel for prior written permission at sheri@exploringnature.org. Thank you for respecting copyright laws.
Site Developed by Eli Madden
Page ID: 1754
IP: 3.87.33.97