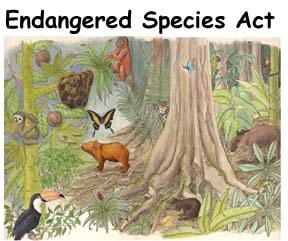 According to the U.S Fish & Wildlife Service, there are several things that measure if an animal is threatened or endangered. Here is how they explain it:
"A species is added to the list when it is determined to be endangered or threatened because of any of the following factors:

This means loss of habitat, over-hunting (or over-collecting) by man or predators, or disease.

Though over-hunting did drive the American bison to being endangered and the passenger pigeon to extinction, most species become endangered because of loss of habitat. If an animal has no place to live, it will go extinct. So the Endangered Species Act gave the U. S. Fish and Wildlife Service (FWS) and the National Oceanic & Atmospheric Administration Fisheries (NOAA) the job of picking habitats in locations on land or in U. S. coastal waters that needed protection to save each endangered species.

©2005-2022 Sheri Amsel. All rights reserved.
The material on this site may not be reproduced, distributed, transmitted, cached or otherwise used for anything other than free educational use. It is not to be used for sale or profit of any kind. If you are unsure whether your use of site materials violates the exploringnature.org copyright, contact Sheri Amsel for prior written permission at sheri@exploringnature.org. Thank you for respecting copyright laws.
Site Developed by Eli Madden
Page ID: 640
IP: 34.239.154.240