The Dirt on Dirt -- Why is Soil Important?

What is Dirt?  Dirt, or soil, is a thin covering over the Earth’s surface. Soil is a mix of eroded rock, mineral nutrients, rotting organic matter, water, air and lots and lots of small living organisms.

Where Does Dirt Come From? New dirt is made all the time, but it is a slow process. It can take 15 years in a wet climate to make only about a half inch of soil. It’s even slower in a dry climate!

Why is Dirt Important? Dirt is the very base of life on Earth because it has most of the important nutrients in which plants need to grow. Those plants in turn feed animals and us. So really, the nutrients in the soil will someday end up in you!

Dirt is also where much of our fresh water is stored. Fresh water travels through the soil being filtered as it goes. It often ends up in underwater rivers called aquifers where we can get it when we need it. Thanks to dirt, we have clean, fresh water to drink!

Looking Closely at Dirt... Not all dirt is the same. If you cut down into the soil, you would see many layers. This is called a soil profile.

The top layer of soil is called the SURFACE LITTER LAYER. This is where all the “litter” of any ecosystem lies. It includes leaves, branches, animal scats and bodies, mushrooms and other rotting matter.

The next layer down is called the TOPSOIL LAYER OR HUMUS. It is made up of rotting organic matter from the litter layer and minerals from rocks that are weathering and breaking down over time into little bits. The rotting organic matter helps the soil hold water so it is good for growing plants. In turn, growing plant roots anchor the topsoil and keep it from being blown and washed away by weather.

The top two layers are very important to life on Earth. They are full of living things like earthworms, insects, fungi and bacteria. All the underground creatures make up an unseen food web all their own. Every inch of soil is full of living things. One scoop of your garden shovel can have millions of bacteria and other helpful microorganisms that are busy decomposing leaf litter into usable nutrients. The nutrients dissolve in the water in the soil and the trees and plants suck them up into their roots and use them to grow. The most fertile soil is dark and crumbly and looks a lot like a rich chocolate cake.

The next layer down is called the SUBSOIL and is made up of crumbling rock, sand, clay, gravel and silt.

Then below that is the PARENT MATERIAL, which is the actual bedrock underlying the soil layers.

Losing Dirt to Natural Disasters
Slip and Slide – Sometimes when there is a long, soaking rain on a very steep mountain, the surface litter layer, topsoil and subsoil, with all the plants and trees rooted in them will slide off the parent material. This leaves the bare bedrock in a long “slide” down the mountain. A very powerful and dangerous event, a slide will uproot and splinter giant trees into kindling piling them all up at the bottom of the slope in a heap. With no soil to root into, a slide can remain bare for centuries. Eventually, as the bedrock cracks and weathers, soil will begin to build up in the cracks. Then over time plants will root and grow where they can.

Losing Dirt to Man-made Disasters
People can affect the soil in many ways. We pollute it by dumping chemicals and other wastes. We deplete it of nutrients by over farming until once fertile grasslands become desert. We allow livestock to over graze it, until the plant life is gone. With no roots to anchor the soil, it can just blow or wash away.

Blowin’ in the Wind – On a dry grassland, the grass rooted into the soil can be the only thing keeping the soil stable. If too many animals are allowed to graze for too long, the grass can be stripped away and the soil will lose its anchoring roots. The area can become a desert. This is called desertification and can have some serious effects on the soil and the people living there.
This happened in the great plains of the United States in the 1930s. It came to be called the “dust bowl” because the dry soil, stripped of anchoring grassroots blew into great clouds of choking dust. The dust bowl lasted for ten years during the great depression and caused terrible hardship to many people.
Desertification and soil loss is a worldwide problem. Scientists believe that 24 billion tons of topsoil are lost every year to erosion by wind, water and other causes. More than 40% of the Earth’s land is dry and more than 2 billion of the people on the planet live in those dry areas.

Soiled Soil  – The Environmental Protection Agency (EPA) was formed in 1970 by the United States government to protect human health and the environment. The EPA has been the leader in cleaning up sites that have been dangerously polluted. A famous example of this was a place called Love Canal.
Love Canal was a neighborhood in Niagara Falls, New York, that had been owned by a Chemical and Plastics Company. The company dumped 22,000 tons of chemical wastes into the soil at Love Canal and covered it with a layer of clay. Then they sold the site and a school and community where built there. It was not a safe place for people, because the soil was so polluted. Eventually they realized that people were getting sick from the polluted ground and the whole community was closed. It’s important to have clean soil for safe water, food, wildlife and homes. 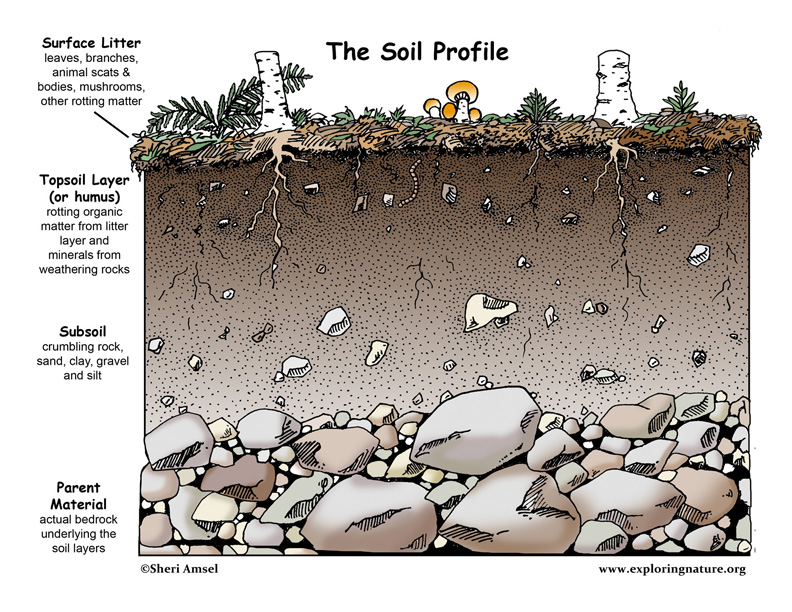 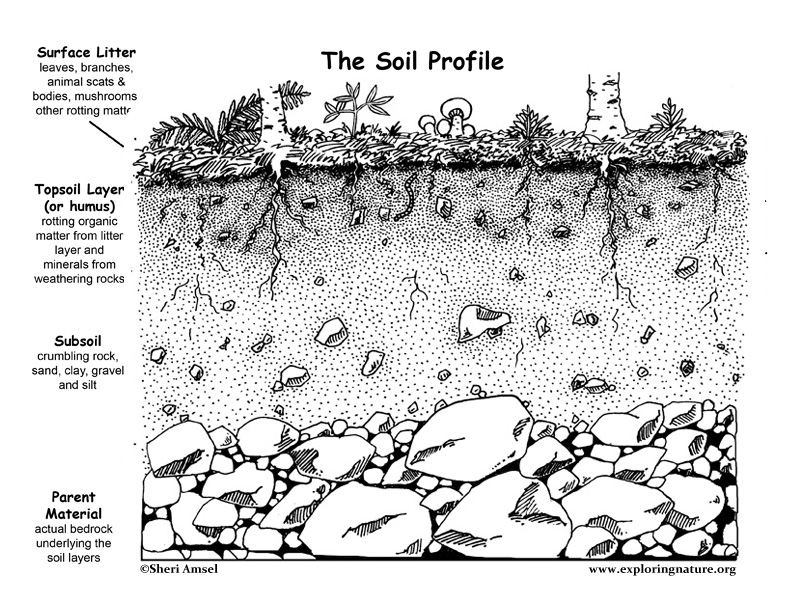 ©2005-2023 Sheri Amsel. All rights reserved.
The material on this site may not be reproduced, distributed, transmitted, cached or otherwise used for anything other than free educational use. It is not to be used for sale or profit of any kind. If you are unsure whether your use of site materials violates the exploringnature.org copyright, contact Sheri Amsel for prior written permission at sheri@exploringnature.org. Thank you for respecting copyright laws.
Site Developed by Eli Madden
Page ID: 1779
IP: 35.173.35.14