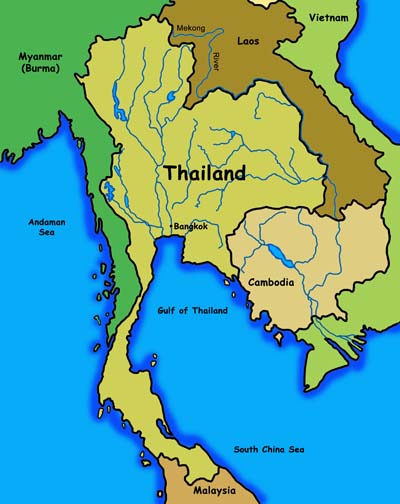 Thailand is located in the center of the Indochina peninsula (which is in Southeast Asia) and covers 513,120 square kilometers (198,120 square miles).

Rainforest covers more than a quarter of Thailand. There was once much more forest, but like every forested country on Earth, Thailand struggles with deforestation. It is estimated that 4% of Thailand's forests are harvested each year. That is 145,297 acres (58,800 hectares) each year. Estimates are that between 1990 and 2005, Thailand lost about 9% of its forest – about 3,459,475 acres (1.4 million hectares).

Northern Thailand is mountainous. This region, called the Thai Highlands, extends through Laos, Burma and China and links to the Himalayas. The highest point is Doi Inthanon in the Thanon Thong Chai Range at 8,415 ft (2,565 meters), but most of the peaks reach only about 6,500 feet (2,000 meters). The rugged terrain is broken up by steep, narrow valleys each with rushing streams. The type of mountain forests depend on the elevation and moisture. At cooler, drier locations at high altitudes, the forests are evergreen. In the lower, wetter valleys there are mixed deciduous forests including rainforest. Thailand's tropical forests are home to many endangered species including the Asian tiger, elephant, Malayan tapir, clouded leopard, and hornbills.

Northeast Thailand (Isan) sits on the Khorat Plateau which tilts southeast, draining its waterways into the  Mun and Chi rivers, tributaries to the Mekong. The Mekong River, which borders the plateau to the east, flows 2,703 miles (4,350 km) from the Tibetan Plateau through China, Myanmar (Burma), Laos, Thailand, Cambodia and Vietnam. The ‪Khorat Plateau‬ covers about 96,312 square miles (155,000 sq km). It is divided into two basins by the Phu Phan mountains – the northern Sakhon Nakhon Basin, and the southern Khorat Basin. It is separated from Central Thailand by the Phetchabun and Dong Phaya Yen mountains in the west, the Sankamphaeng Range in the southwest and by the Dongrek mountains in the south. These mountain ranges have throughout history made access to the plateau more difficult. They also affect the climate of Thailand. Together with the Truong Son Range in the northeast, these mountains trap rainfall and create a "rain shadow" which decreases the monsoons of the southwest. So the annual rainfall in Nakhon Ratchasima is less – about 45 inches (1,150 mm), compared with 59 inches (1,500 mm) in central Thailand. This makes a difference in the growing season so that region is less fertile for growing rice.

Central Thailand is made up mostly of the flat Chao Phraya river valley, which runs into the Gulf of Thailand. The lowland areas of the Chao Phraya watershed in central Thailand were once freshwater swamp forests, but over time were converted to rice paddies or urban development (cities like Thailand's capital - Bangkok), so are now essentially gone with the wildlife that lived there.

Southern Thailand consists of the narrow Kra Isthmus that widens into the Malay Peninsula.

The Andaman Sea coast is lined with mangroves. The mangroves protect the coast during normal seasonal flooding and storm surges. Though an effective natural barrier, they were not able to protect the coast during the overwhelming effect of the 2004 tsunami. The coastline on the Gulf of Thailand has mangrove forests, mudflats, and sandy beaches and receives the water of five major rivers. This inflow of fresh water and nutrients combined with the shallow coastline makes this coast a rich fishery. 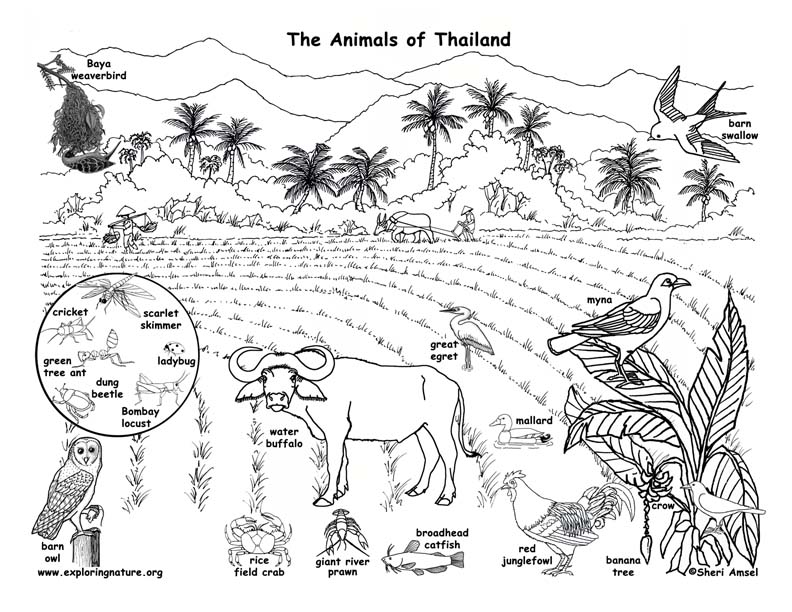 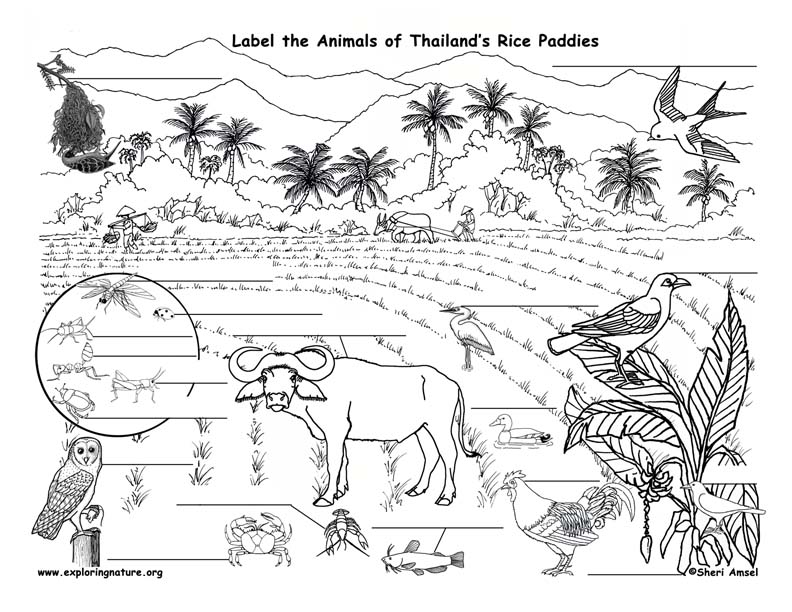 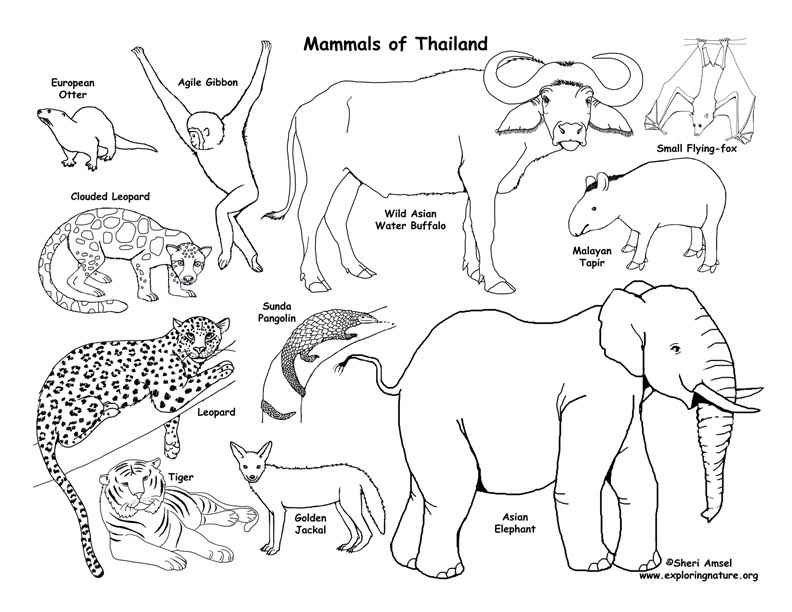 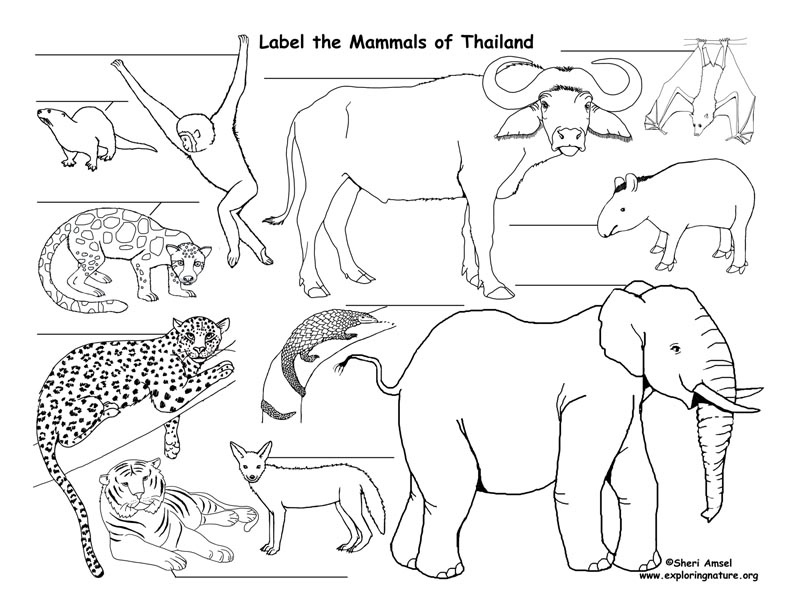 ©2005-2022 Sheri Amsel. All rights reserved.
The material on this site may not be reproduced, distributed, transmitted, cached or otherwise used for anything other than free educational use. It is not to be used for sale or profit of any kind. If you are unsure whether your use of site materials violates the exploringnature.org copyright, contact Sheri Amsel for prior written permission at sheri@exploringnature.org. Thank you for respecting copyright laws.
Site Developed by Eli Madden
Page ID: 1728
IP: 44.197.198.214