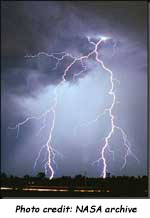 Stronger winds, called moderate wind shear, can make bigger thunderstorms. These thunderstorms can last for many hours. They can grow larger and larger with strong winds, lightning, heavy rains, flooding, and hail. A row of these storms, moving together is called a multicell storm.

Even stronger winds, called strong shear, that change directions as the air rises, can make a spinning thunderstorm. These very powerful spinning storms are called supercell thunderstorms. They can cause strong winds, lightning, heavy rains, flooding, hail and even tornadoes. Some supercells carry a lot of rain and release downbursts with large hail. These severe rain bursts cause flooding. Other supercells have little rain, but can spin off tornadoes and hail. All these storms are very dangerous.

Sometimes when a cold front is moving into an area, a row of thunderstorms form along its front edge. This is called a squall line. Squall lines are very big storms. They can stretch hundreds of miles, moving out in front of the cold air.

Thunderstorms form when warm, wet air rises and meets the cold, dry air above it (convection storm). The warmer the rising air, the stronger the force it makes. Warm air rises because the Earth’s surface heats unevenly. Winds move from one area to the next and when they come together, they can add to the force of the rising air.

The rising, wet air forms puffy cumulus clouds. The cumulus clouds rise until they hit the dry air above. When the warm, wet air hits the cool, dry air above, the water in the rising cloud turns to water vapor (it evaporates). This makes the dry air – wet. So the clouds can rise further and further into the new wet air. From the ground, this process looks like a rising dome of white puffy clouds. As the cloud grows, the water vapor turns into water droplets. This gives off heat, which makes the clouds grow even more. This is called the updraft. This happens very quickly. A cumulus cloud can rise into a thunderhead in just a few minutes.

As the clouds rise into the cold sky above, the water droplets join together. They get bigger and heavier. Finally they begin to fall. As they fall, they pull air with them. This is called a downdraft. Once a thundercloud has both updrafts and downdrafts, it is a full-grown (mature) thunderstorm cell.

Supercell thunderstorms are larger, stronger and more dangerous than the ordinary cell thunderstorm. They often form along a weather front where unstable air adds to the power of the growing storm. A supercell thunderstorm can be one big spiral updraft. Some make heavy rain and some don’t, but all can form hail and even spin off tornadoes.

The thunderstorm downdraft can push a gust of cool air in front of it. This is called a gust front. For people on the ground, the cool air before a thunderstorm can feel great on a hot summer day. But after the storm passes, the air can feel hotter and more humid than before the storm.

Hot, humid air, uneven heating of the Earth’s surface and strong, unstable winds can all add up to a thunderstorm.

There are many dangers with a thunderstorm. Rain can fall so hard (torrential) that it starts a flash flood with no warning. Flash floods can build upstream and rush down in a wall of water. This can cause damage and loss of life downstream where it may not even rain before the flashflood hits them.

Another dangerous part of a thunderstorm is lightning. Lightning is a big electrical charge that forms in a thunderhead. About 1 in 5 lightning bolts form between the cloud and the ground (the rest stay up in the cloud). Lightning is hot – about 54,000°F. That’s 5 times hotter than the sun! This burst of heat causes a shock wave in the air around it and a sound wave boom – thunder. Because light travels faster than sound, we see lightning before we hear it. The sound travels about 1,000 feet per second, so it takes about 5 seconds for the sound of thunder to go a mile. This is how we know how far away a lightning storm is from us. A thunder crack at the same time as the lightning flash means that lightning has struck very close by.

If you are outside in a lightning storm, do not wait to count the seconds. These storms move very quickly.

One of the worst flash floods was in Estes Park, Colorado in 1976. The Big Thompson River flows east 25 miles down a narrow Canyon. More than 2,000 people live, work, camp and hike in the canyon every day in the summer. On July 31, 1976, more than 135 people drowned in a flash flood that came down the Canyon.

Thunderstorms pass by quickly in Colorado in the summer. The thunderstorm on July 31 was odd because it stayed at the top of the canyon for 4 hours. It dropped 12 inches of rain. This caused the Big Thompson River to overflow and wash away the only road down the canyon (U.S. Route 34). It also carried off cars, campers and homes, but then something worse happened.

In a narrow turn in the canyon, the flood debris backed up. Water built up behind them like a dam. Then in one moment, the debris gave way and a 20-foot wall of water rushed down the rest of the canyon. Some of the people lost in the flood were in this lower end of the canyon where no rain had fallen at all.

It was a sad and unusual flash flood, but there is no telling if it will happen again. No one can change the shape of that narrow river canyon. It could funnel rainwater in this way again someday. Now, when you drive up the Big Thompson Canyon, there are warning signs along the sides of the road all the way up. They say “If the river is flooding, leave your car, hike up hill as quickly as possible.” Hopefully next time, they will be better prepared.

©2005-2023 Sheri Amsel. All rights reserved.
The material on this site may not be reproduced, distributed, transmitted, cached or otherwise used for anything other than free educational use. It is not to be used for sale or profit of any kind. If you are unsure whether your use of site materials violates the exploringnature.org copyright, contact Sheri Amsel for prior written permission at sheri@exploringnature.org. Thank you for respecting copyright laws.
Site Developed by Eli Madden
Page ID: 1891
IP: 3.236.70.233