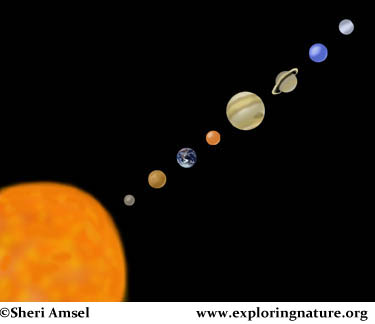 A solar system is a collection of planets revolving around a central star. It includes all their moons, and the comets, meteors, dust and gas in between. Each galaxy has billions of solar systems. Our solar system extends trillions of miles out into outer space. It ends in an icy cloud called the Oort Cloud. The planets in our solar system include (from the sun outward): Mercury, Venus, Earth, Mars, Jupiter, Saturn, Uranus, and Neptune (Pluto was thought to be the ninth planet until recently). All the planets of our solar system orbit the sun.

©2005-2022 Sheri Amsel. All rights reserved.
The material on this site may not be reproduced, distributed, transmitted, cached or otherwise used for anything other than free educational use. It is not to be used for sale or profit of any kind. If you are unsure whether your use of site materials violates the exploringnature.org copyright, contact Sheri Amsel for prior written permission at sheri@exploringnature.org. Thank you for respecting copyright laws.
Site Developed by Eli Madden
Page ID: 1834
IP: 18.204.56.185