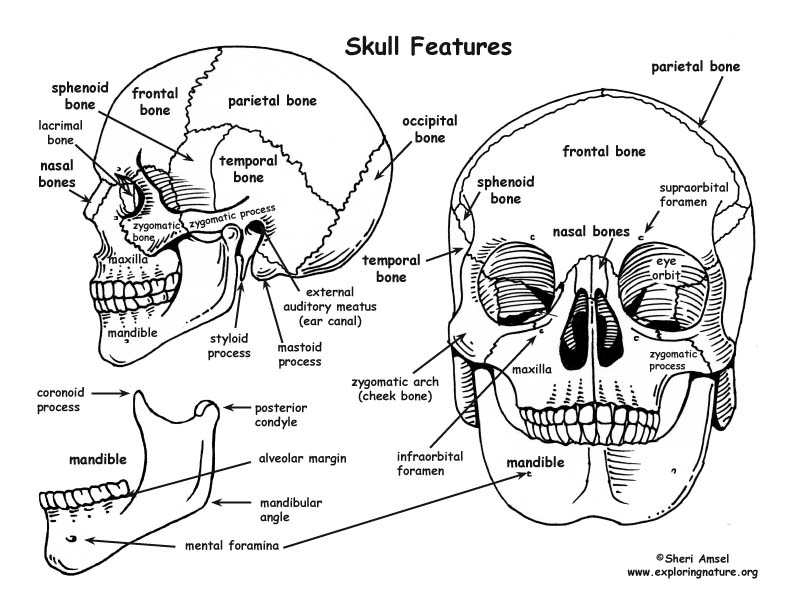 The cranium surrounds and protects the brain and the organs of hearing and balance. The facial bones form the structure of the face, hold the eyes, and the organs for taste and smell and anchor the teeth. They have the openings for air and food. The whole skull anchors muscles that hold the head up, allow us to chew, and form facial expressions. Most of the bones of the skull are flat bones, except the mandible. The mandible is attached to the skull by a type of hinge joint. It is the biggest, strongest bone of the skull.

The frontal bone is located on the anterior cranium and includes the following features:
1)    It makes up the roof of the eye orbits.
2)    Inside the skull, it forms the anterior cranial fossa, which contains the frontal lobes of the cerebrum.
3)    It has the supraorbital foramen, where the supraorbital artery and nerve pass out of the skull onto the forehead.
4)    It contains the frontal sinus (part of the paranasal sinuses).
5)    It makes up (with the parietal bone) of the anterior fontanelle.

The paired parietal bones make up the top and lateral aspects of the cranium.
The occipital bone is located on the back of the cranium and includes the following features:
1)    Internally, it forms the posterior cranial fossa where the occipital lobe of the brain sits.
2)    It contains the foramen magnum – the passageway between the vertebral column and the cranial cavity.
3)    It has the external occipital protuberance.

The ethmoid bone is located between the nasal bones of the face and has the following features:
1)    It forms the crista galli on top (superiorly) – the “cocks comb.”
2)    It forms the cribriform plate (a horizontal plate beneath the crsita galli). It is full of holes (olfactory foramina) where the olfactory nerves pass to pick up smell.
3)    It forms the perpendicular plate (which projects doen to be part of the nasal septum).
4)    It has the ethmoid sinuses (part of the paranasal sinuses)
5)    It forms the superior and middle nasal conchae (extending laterally and inferiorly) 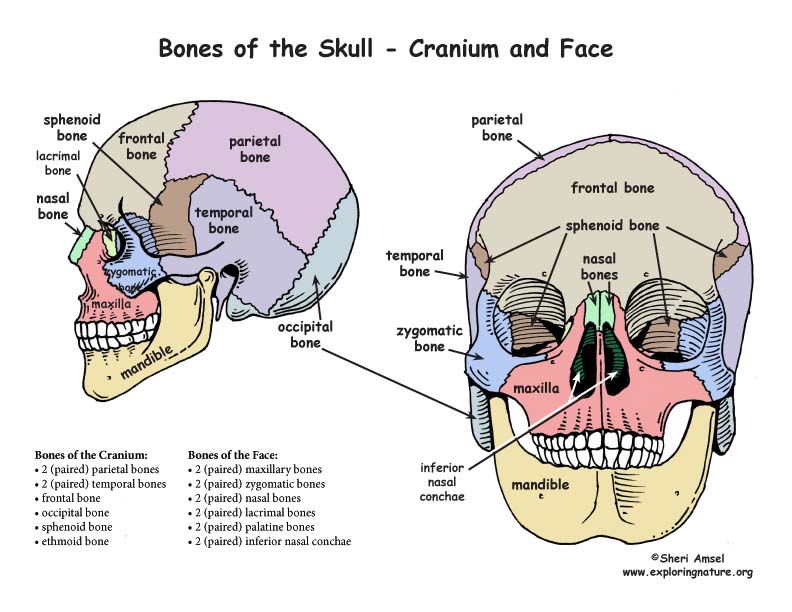 The paired maxillary bones are fused medially and contain the following features:
1)    They make up the upper jaw and central face.
2)    They form the alveolar margin (where the upper teeth are inserted).
3)    They include the palatine processes (the hard palate) that projects posteriorly.
4)    They include the frontal processes (medial and inferior eye orbit by the bridge of the nose).
5)    The form the maxillary sinuses (the largest part of the paranasal sinuses between the orbits and the upper teeth).
6)    They form the zygomatic processes (the anterior part of the zygomatic arch).
7)    They have the inferior orbital fissure (inside the orbit where the vagal nerve and zygomatic nerve and blood vessels pass).
8)    They include the infraorbital foramen (where the infraorbital nerve and arteries to the face run).

The paired nasal bones make up the bridge of the nose.

The paired lacrimal bones are made up of the medial walls of each orbit with a lateral “sulcus” through which tears can drain into the nasal cavities (which is why you get a runny nose when your eyes tear).

The paired palatine bones are inside the skull made up of the horizontal plate (which is the posterior portion of the hard palate) and the posterior, lateral wall of the nasal cavity.

The vomer is the plow-shaped bone within the nasal cavity that makes up part of the nasal septum.

The inferior nasal conchae form the lateral walls of the nasal cavity below the middle conchae of the ethmoid bone. 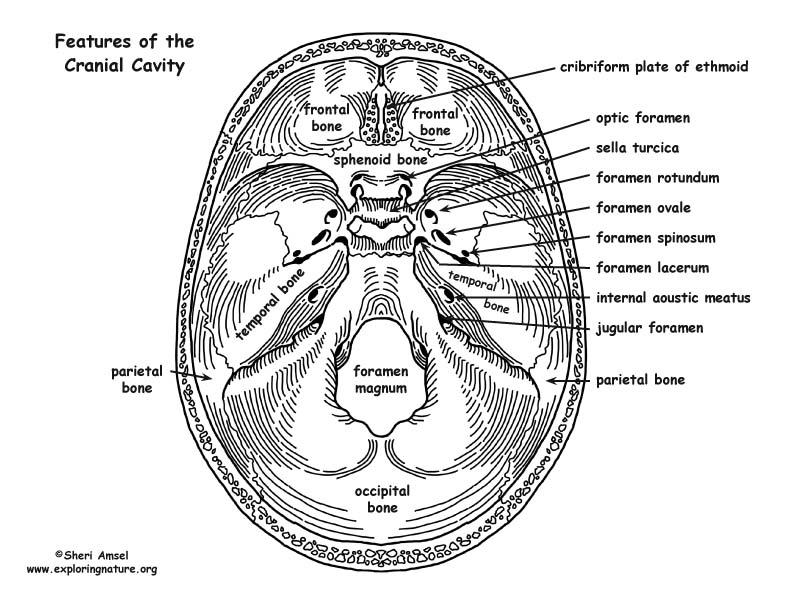 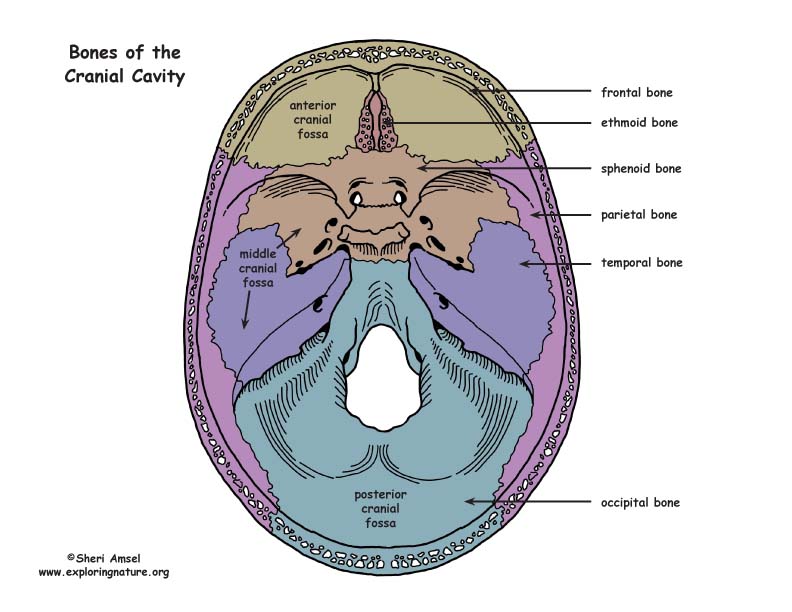 Activities to Learn About It:

Assessment: Labeling the Parts of the Skull 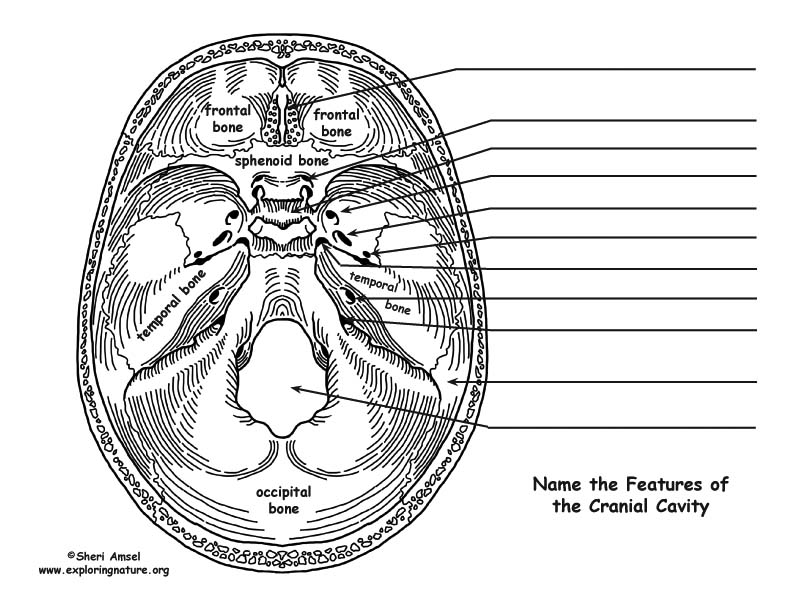 Grade 6-8 - MS-LS1 From Molecules to Organisms: Structures and Processes

©2005-2022 Sheri Amsel. All rights reserved.
The material on this site may not be reproduced, distributed, transmitted, cached or otherwise used for anything other than free educational use. It is not to be used for sale or profit of any kind. If you are unsure whether your use of site materials violates the exploringnature.org copyright, contact Sheri Amsel for prior written permission at sheri@exploringnature.org. Thank you for respecting copyright laws.
Site Developed by Eli Madden
Page ID: 1556
IP: 44.200.171.74