The Sea lamprey is native to the northern Atlantic Ocean and its freshwater tributaries in Europe and North America. Because its life cycle includes both freshwater and marine habitats, it travels inland to waterways. Sea Lampreys became an invasive species in the Upper Great Lakes when a canal was built between Lake Ontario and Lake Erie.

In the past, Niagara Fall had been a barrier that kept the lamprey from entering the Upper Great Lakes. With the development of the canals in the early 1920s and the subsequent boat traffic, the lamprey worked their way into Lake Heron, Lake Michigan and Lake Superior.

Sea lamprey affect fish populations by attaching themselves to the sides of large fish and sucking our their bodily fluids. They attack trout, whitefish, chubs and other game fish. The disappearance of these large game fish allowed the increase of smaller, less desirable species like the alewife, changing the ecosystem’s populations.

The U.S. Fish & Wildlife Service have a control program for the lamprey in the Great Lakes including chemical “lamprocide,” barriers to block upstream migration and the release of sterile male lamprey that compete for food but produce no young. The combination of all these controls has led to a significant reduction in lampreys. 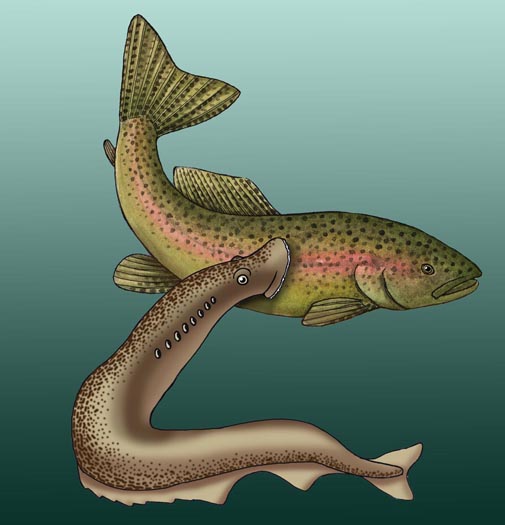 ©2005-2022 Sheri Amsel. All rights reserved.
The material on this site may not be reproduced, distributed, transmitted, cached or otherwise used for anything other than free educational use. It is not to be used for sale or profit of any kind. If you are unsure whether your use of site materials violates the exploringnature.org copyright, contact Sheri Amsel for prior written permission at sheri@exploringnature.org. Thank you for respecting copyright laws.
Site Developed by Eli Madden
Page ID: 1635
IP: 44.197.198.214