The chromosomes we inherit from our parents are not exact copies. They experience recombination — where pieces of genetic material are swapped from matching chromosomes to form new mixtures of genes. This produces traits that may not have been in either parent. Unequal swapping of genes may cause many diseases.

The differences between human genomes are small, but small changes in the code, called single nucleotide polymorphisms (SNPs), if they occur in a protein sequencing area, can produce different proteins then the body intended. This can have an effect on biological function.

Mapping the most common SNPs in the human genome is one of the most immediate benefits of Human Genome Project. SNPs (promounced snips)” are found along the chromosome at about 1 every 600-1,000 basepairs. They seem to appear in groups called, “Haplotype Blocks.” It is believed that the genome may have as many as 180, 000 haplotype blocks of SNPs. 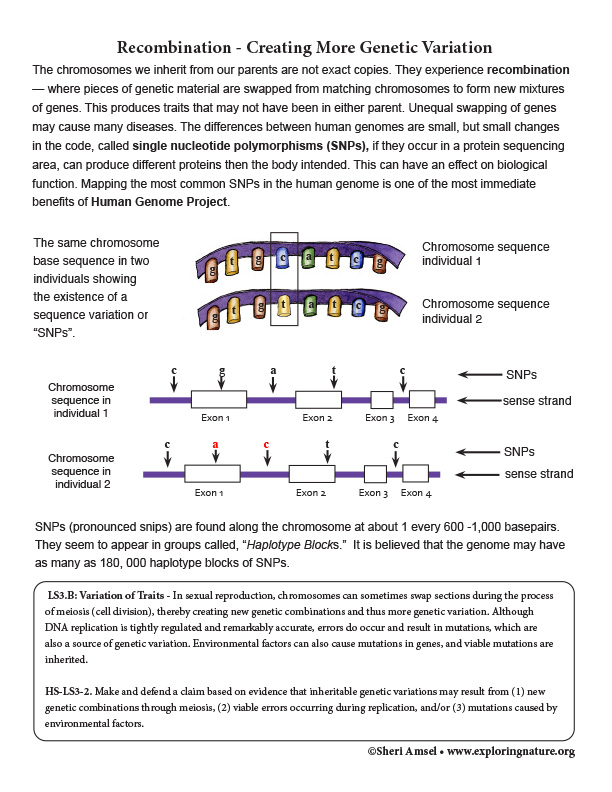 ©2005-2022 Sheri Amsel. All rights reserved.
The material on this site may not be reproduced, distributed, transmitted, cached or otherwise used for anything other than free educational use. It is not to be used for sale or profit of any kind. If you are unsure whether your use of site materials violates the exploringnature.org copyright, contact Sheri Amsel for prior written permission at sheri@exploringnature.org. Thank you for respecting copyright laws.
Site Developed by Eli Madden
Page ID: 4992
IP: 3.235.140.84