Purple loosestrife was brought to North America from Europe by early settlers who wished to bring a bit of home to their gardens in the New World. It is thought to also have been brought accidentally in soil that was used as ballast in early shipping.

It was brought over from Europe in the early 1800s, but has since spread throughout North America.

Purple loosestrife looks like a delicate spike of purple flowers but it is deceptively powerful spreading quickly in wetlands and choking out other native plant species, such as cattails, fish and waterfowl.

Many organizations have joined together to try to stop the spread of purple loosestrife and even reclaim wetlands already damaged by this aggressive invasive species. They removed the plants when they are flowering in late June, July and early August before they drop their petals (and produce seeds).

In areas with a small number of plants, the flower stalks are cut before they go to seed – as each purple loosestrife plant can produce more than 2 million seeds every year.  They can also be dug out and removed carefully so that their seeds are not accidentally spread in this process or the plants will grow back.

As purple loosestrife grows, its roots expand and spread and removing the plants becomes more difficult, because broken roots left behind can grow new plants.

Biological controls for purple loosestrife – plant eating insects – have been studied and after many years of trials were found safe and effective. In 1996, they were released – two species of beetles that eat the leaves and a species of weevil that bores into the roots and lays their eggs (the young will then hatch out and eat the roots). There is hope that this will help reduce the purple loosestrife slowly over time. 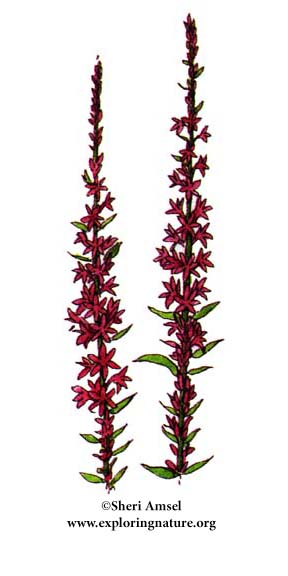 ©2005-2022 Sheri Amsel. All rights reserved.
The material on this site may not be reproduced, distributed, transmitted, cached or otherwise used for anything other than free educational use. It is not to be used for sale or profit of any kind. If you are unsure whether your use of site materials violates the exploringnature.org copyright, contact Sheri Amsel for prior written permission at sheri@exploringnature.org. Thank you for respecting copyright laws.
Site Developed by Eli Madden
Page ID: 1632
IP: 44.200.175.255