Most plants depend on animals to help pollinate their flowers - insects, birds and even bats. Animals are attracted to flowers by their bright colors and sweet smell, which signals the availability of nectar on which they can feed. Hummingbirds use their long bill to reach deep inside long, tubular flowers to collect nectar. While inside, their feathers pick up pollen. When they fly to the next flower, the pollen on their feathers touches the inside of that flower – pollinating it. Some night blooming flowers have a scent that attracts bats. They will go from flower to flower licking up pollen and nectar and pollinating the flowers as they go. Most flowers, though, are pollinated by insects – bees, butterflies, moths and flies. Insects pick up pollen while they are inside each flower and bring it on to the next – pollinating it. Just by their sheer numbers compared to other animals, insects are the most effective pollinators. Once a flower is pollinated, it develops into a fruit, inside which, grows its seeds.

Non-flowering plants, such as conifers, release an abundance of pollen into the air and the wind blows it around. Some of it reaches the female cones to complete pollination.

After the seeds develop, the plant has to spread them out into the world. This is called seed dispersal. Some seeds have hooks or barbs that attach to the fur of passing animals. Later the animal may bite or scratch off the itchy burr, spreading the seeds onto new ground. Other seeds form inside a fruit, such as apples, pears, blueberries and raspberries. This attracts animals to eat them. The seeds are then spit out or go through the animal’s digestive tract to be defecated onto the ground, where they can start to grow. Animals, such as squirrels and chipmunks, collect seeds and bury them to store them. For an acorn, this is not only spreading the seeds, but planting it in the ground as well.

Some seeds have developed traits to use the wind to get their seeds out in the world. A dandelion’s seeds have fluffy parachutes. Maple seeds have spinning wings, called samaras. Both these traits help the seeds fly away from the parent plant to take root in their own sunny place.

LS1.B: Growth and Development of Organisms - Plants reproduce in a variety of ways, sometimes depending on animal behavior and specialized features for reproduction. (MS-LS1-4) 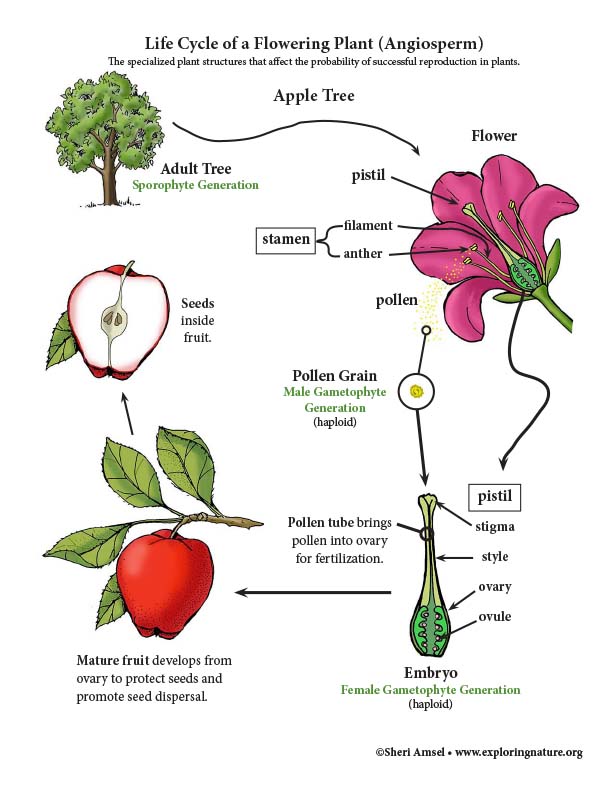 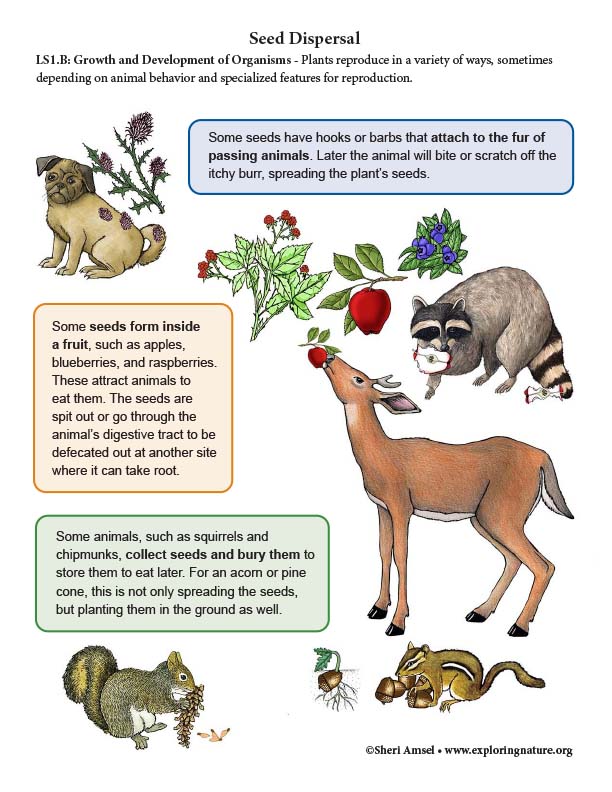 ©2005-2022 Sheri Amsel. All rights reserved.
The material on this site may not be reproduced, distributed, transmitted, cached or otherwise used for anything other than free educational use. It is not to be used for sale or profit of any kind. If you are unsure whether your use of site materials violates the exploringnature.org copyright, contact Sheri Amsel for prior written permission at sheri@exploringnature.org. Thank you for respecting copyright laws.
Site Developed by Eli Madden
Page ID: 6147
IP: 44.201.99.222