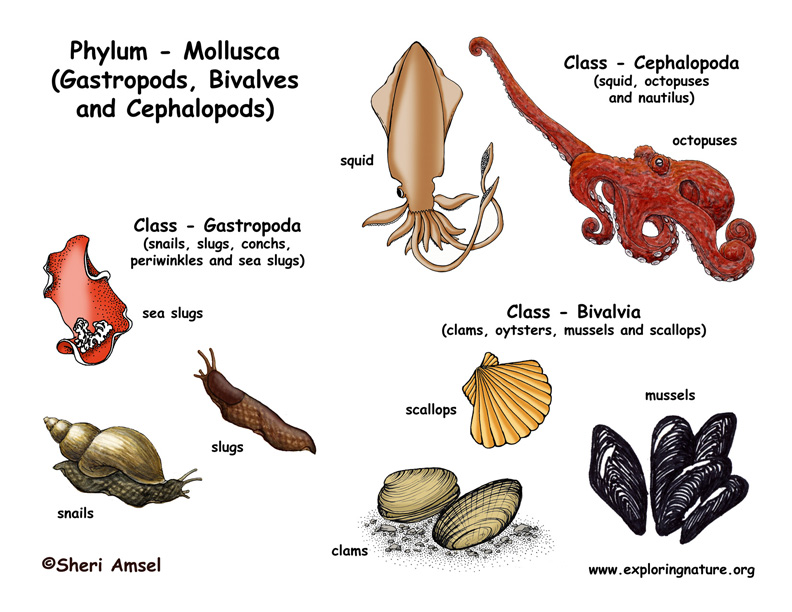 There are more than 50,000 species in this phylum. Mollusks are invertebrates and include octopus, squid, snails, slugs, clams, and oysters and many others. As diverse as this phylum is, all its animals include three physical traits. They have what is referred to as the visceral mass, mantle and foot.

The gastropods include snails, slugs, conchs, periwinkles and sea slugs.

Diet: Some gastropods are herbivores using the radula to scrape off food particles. Others are carnivores and use the radula to penetrate the shells of their prey.

Physical Traits: They have a large, muscular foot on which they move slowly along any surface and the visceral mass sits atop the foot. Many gastropods have shells, though not all. Both the slug and the sea slug (nudibranch) lack a shell. Snails and slugs breathe through respiratory pores, the oxygen being absorbed directly into the abundant tiny blood vessels of the mantle. In the more aquatic gastropods, there are gills instead.  Snails have an odd development, the young going through a torsion that results in the anus emptying waste out at the back of the head. They have a spiral shell and a tough plate, called an operculum, that can seal them inside in case of danger. They have a rough, tongue-like structure, called a radula, with which they scrape away at food. They also have two pairs of tentacles, only one bearing eyes at the end.

The Cephalopods (Class Cephalopoda) include squid, octopuses and nautilus. Their name Cephalopoda means “head footed.” They are all fast moving ocean animals.

Habitat: They are all found in the ocean.

Physical Traits: They have a series of arms or tentacles that circle the “head.” Each arm has two rows of suction sups. Though the octopus has eight arms, some Cephalopoda have a mixture of arms and tentacles. Some having up to a 100 tentacles. Cephalopods have a relatively complex brain and eyes with good, color vision. They are thought to be intelligent and can learn from experience. Squid and octopuses have a funnel structure, called a hyponome, through which they can blow water to move themselves quickly along. Many species have ink to release if threatened and can change color to escape predators. Some cephalopods have shells to protect them, like the Nautilus, while others have an internal skeletal like the squid. Octopi have neither.

Diet: They are predators, using their arms (or tentacles) to trap prey, and a sharp beak to bite prey. They then stuff prey into a central mouth.

Habitat: They are found in both salt (marine) and freshwater habitats.

Physical Traits: They have two shells connected by a hinge – called the ligament, and kept closed by powerful  muscles. The shells can open and close when needed, but are usually held closed by powerful muscles to protect them from predators. All use their muscular foot to meet their different lifestyle needs. Clams burrow into the sandy bottom. Scallops burrow or swim freely, using their shell to “clap” water propelling them as needed. Mussels use their foot to anchor to rocks and other objects. They have gills that are bathed with fresh water (and oxygen) through posterior siphons. They have no head, but a diffuse nerve network made up of three nerve centers (or ganglia) distributed around their visceral mass.

Diet: Unlike many mollusks that feed using a rasping tongue, called a radula, bivalves feed by filtering food particles from the water. They do this by siphoning water over the gills which traps it and propels it toward the mouth.

To help students learn the animals of the Mollusk Phylum, print out this black and white diagram of them.

To help students learn the anatomy of the Mollusks, print out a black and white version of the color following diagrams:

Anatomy of the Snail

Anatomy of the Squid

Anatomy of the Clam

Basic External Anatomy Labeling of the Snail (for younger students).

Basic Anatomy of the Squid Labeling Page (for younger students). 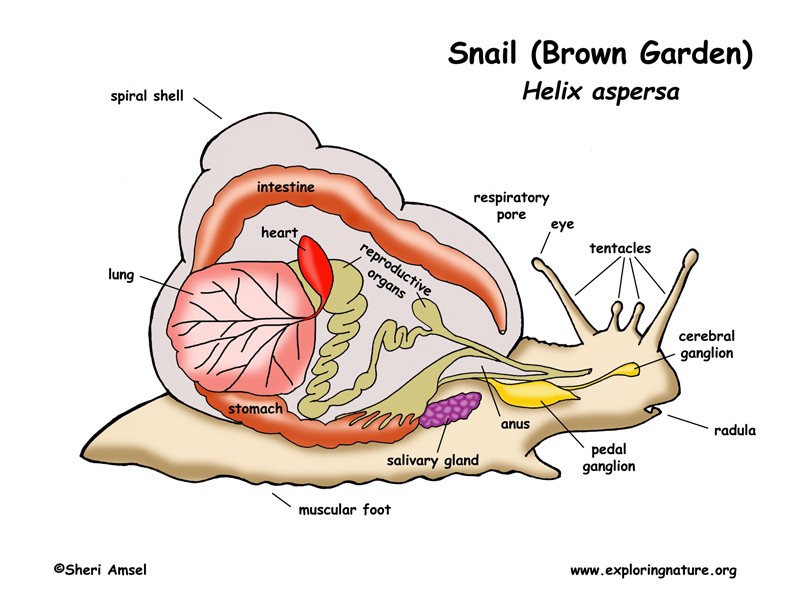 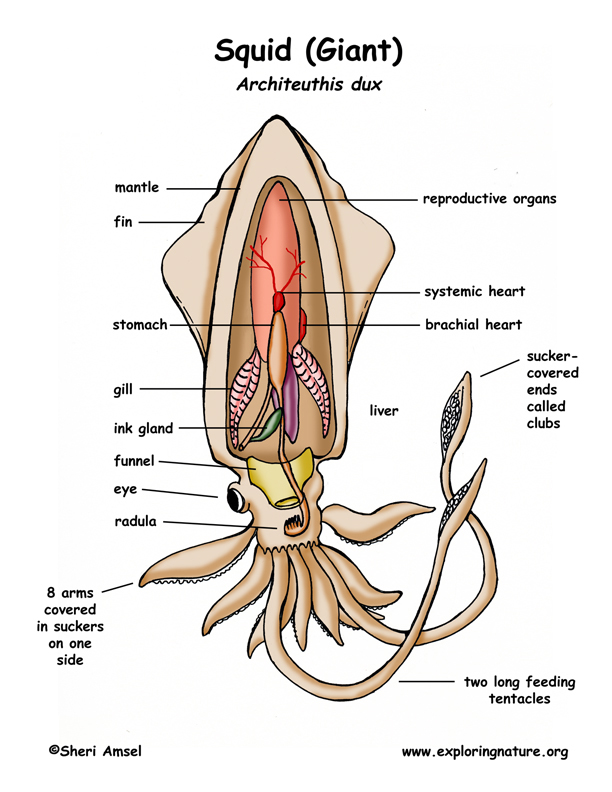 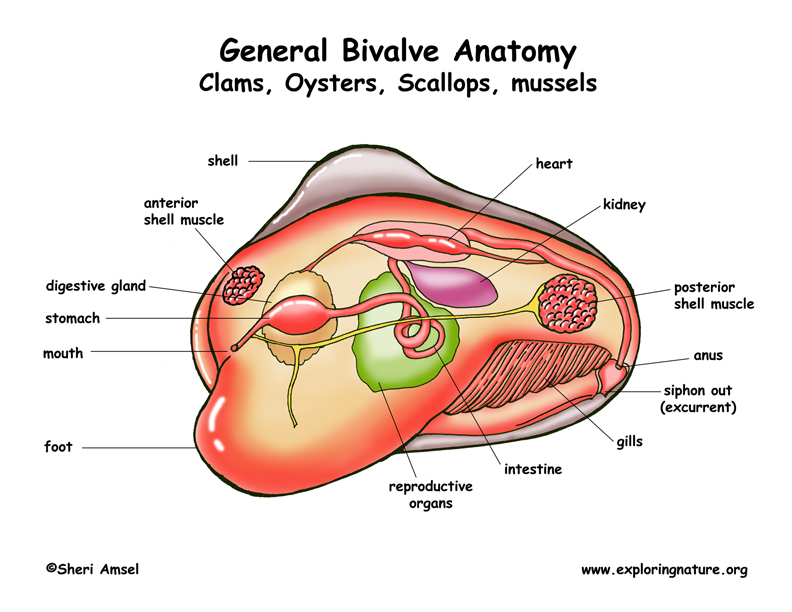 ©2005-2022 Sheri Amsel. All rights reserved.
The material on this site may not be reproduced, distributed, transmitted, cached or otherwise used for anything other than free educational use. It is not to be used for sale or profit of any kind. If you are unsure whether your use of site materials violates the exploringnature.org copyright, contact Sheri Amsel for prior written permission at sheri@exploringnature.org. Thank you for respecting copyright laws.
Site Developed by Eli Madden
Page ID: 633
IP: 44.210.21.70