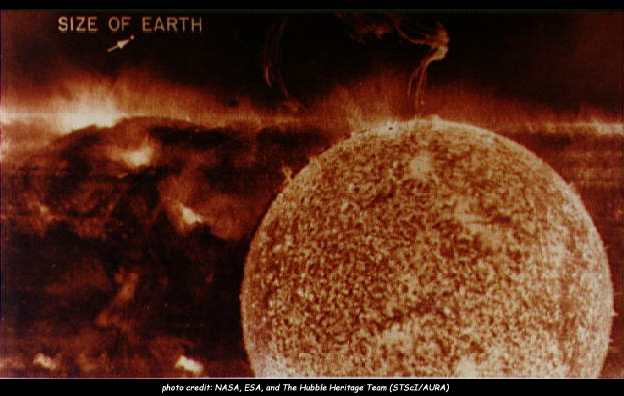 Sometimes sunspots appear on its surface. They are areas of cooler, darker gas. How many sunspots we see varies in an 11-year sunspot cycle.

Loops of the sun's magnetic field sometimes burst into space. They are called prominences.

Gas particles (plasma) escape from the sun’s surface and fly through space gaining speed as they go. This is called solar wind. When it reaches Earth, we are protected from it by our planet's magnetic field. The solar particles that do make it through to reach the earth's atmosphere cause something called auroras, which we can see in the night sky. They can also cause radio and electrical problems on Earth.

The Earth is 93 million miles from the sun.

©2005-2022 Sheri Amsel. All rights reserved.
The material on this site may not be reproduced, distributed, transmitted, cached or otherwise used for anything other than free educational use. It is not to be used for sale or profit of any kind. If you are unsure whether your use of site materials violates the exploringnature.org copyright, contact Sheri Amsel for prior written permission at sheri@exploringnature.org. Thank you for respecting copyright laws.
Site Developed by Eli Madden
Page ID: 1869
IP: 44.197.108.169