Our Stuff Weighs More Than We Do 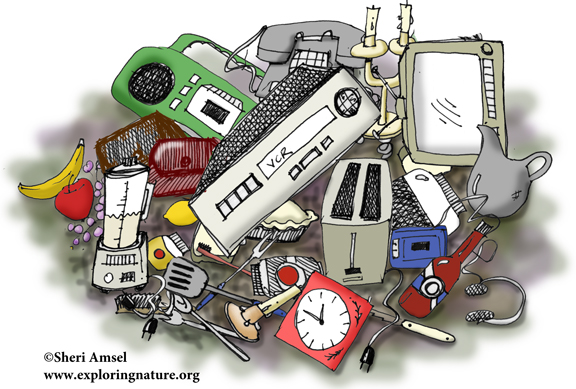 A new study by geologist, Dr. Jan Zalasiewicz, from the University of Leicester in England, found that our manufactured goods are heavy - weighing in at about 30 trillion metric tons. This includes everything from toasters to pick up trucks. This human-made layer of goods has been labeled the “technosphere” and is thought to outweigh our natural biosphere at 30 trillion metric tons. It represents how people are changing our planet.

In another article, Dr. Zalasiewicz is among 35 experts that feel that mankind has entered a new geoplogic epoch that they have names the “Anthropocene.” This moves us out of the Holocene Epoch that the International Commission on Stratigraphy (ICS) had us in since the last ice age 11,700 years ago. This new epoch has been approved because of mankind’s affect on the planet. Not just a carbon footprint, but literally tons of plastics and oddly enough, chicken bones, that we have dumped around the planet.

Read more about this off site, at Science News: https://www.sciencenews.org/article/humans-stuff-vastly-outweighs-humans?mode=topic&context=60

Read more about this off site, at Science News: https://www.sciencenews.org/article/nuclear-blasts-other-human-activity-signal-new-epoch-anthropocene

1) How has human maufacturing affected the Earth's Biosphere?

2) Will all the products we have created leave a fossil record?

ESS3.A: Natural Resources
• Humans depend on Earth’s land, ocean, atmosphere, and biosphere for many different resources. Minerals, fresh water, and biosphere resources are limited, and many are not renewable or replaceable over human lifetimes. These resources are distributed unevenly around the planet as a result of past geologic processes. (MS-ESS3-1)

ESS3.B: Natural Hazards
• Mapping the history of natural hazards in a region, combined with an understanding of related geologic forces can help forecast the locations and likelihoods of future events. (MS-ESS3-2)

ESS3.C: Human Impacts on Earth Systems
• Human activities have significantly altered the biosphere, sometimes damaging or destroying natural habitats and causing the extinction of other species. But changes to Earth’s environments can have different impacts (negative and positive) for different living things. (MS-ESS3-3)
• Typically as human populations and per-capita consumption of natural resources increase, so do the negative impacts on Earth unless the activities and technologies involved are engineered otherwise. (MS-ESS3-3),(MS-ESS3-4)

ESS3.D: Global Climate Change
• Human activities, such as the release of greenhouse gases from burning fossil fuels, are major factors in the current rise in Earth’s mean surface temperature (global warming). Reducing the level of climate change and reducing human vulnerability to whatever climate changes do occur depend on the understanding of climate science, engineering capabilities, and other kinds of knowledge, such as understanding of human behavior and on applying that knowledge wisely in decisions and activities. (MS-ESS3-5)

©2005-2022 Sheri Amsel. All rights reserved.
The material on this site may not be reproduced, distributed, transmitted, cached or otherwise used for anything other than free educational use. It is not to be used for sale or profit of any kind. If you are unsure whether your use of site materials violates the exploringnature.org copyright, contact Sheri Amsel for prior written permission at sheri@exploringnature.org. Thank you for respecting copyright laws.
Site Developed by Eli Madden
Page ID: 5184
IP: 34.231.21.105