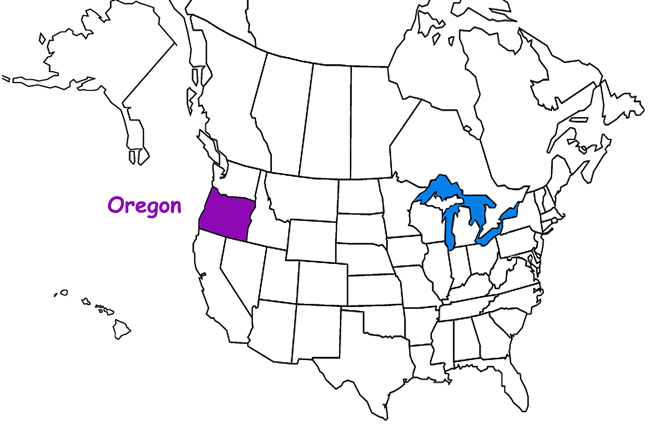 Forests
Oregon has many distinct kinds of forests. There are bottomland forests that are very wet with trees that can tolerate "wet feet" for part of the year. This is a mixed forest common to floodplains with alder, ash, willow, dogwood and others.

Riparian habitats are also wet habitats usually surrounding or along lakes and rivers.

Upland forests are higher and drier with Douglas fir and big leaf maple forming a thick canopy. These are found on the north coast of Oregon and provide vital habitat for wildlife.

Higher up in the mountains the forests turn to high elevation conifers: subalpine fir, Engelmann spruce, mountain hemlock and whitebark pine. In the east Cascades, the most common conifer is lodgepole pine. Lower in the foothills are ponderosa pine forests and in some places western juniper woodlands. The cliff habitats of eastern Oregon have mountain mahogany scrublands. The foothills and mountains have conifer forests with stands of quaking aspen. There are also oak woodlands with chinquapin and black, canyon live and tan oaks.

Grasslands
Oregon has a swath of coastal prairie with ferns, grasses, sedges and wildflowers that act as coastal erosion protection. Prairies also once spread across the Willamette Valley kept open with annual burning by the native Kalapuya natives. The arrival of settlers in the mid-1800s changed the Valley which was over time developed and allowed to grow into forest and scrublands.

Wetlands and Coastal Habitats
Wetlands are very important natural communities providing valuable wildlife habitat. They can stabilize shorelines and protect the land from storm surges and flooding. They act as filters for pollutants that run off the land from farms, towns and cities.

Oregon's salt marshes act as a boundary between saltwater wetland habitats and dry land. They are rich with plant and animal life that can tolerate salt and the rising and falling tides. The matted roots of salt marsh plants help to protect the coast from erosion and storm surges while polluted runoff from land is filtered before reaching the ocean.

When freshwater rivers and streams reach the ocean and mix with the seawater they form an estuary. Estuaries are often protected from the open ocean by mudflats, reefs and barrier islands and are home to plants and animals adapted to tolerate both salt and freshwater like crabs, shrimp, salmon and ospreys.

Surrounding the estuary are the mudflats where low wave action results in a build up of sediments. The mudflats protect the coastline from erosion and flooding and are important resting areas for migrating birds and wintering waterfowl.

Three of the refuges are marine –  the Oregon Islands, Cape Meares and Three Arch Rocks. They protect coastal rocks, reefs, islands and several headland areas and contain some of the most important seabird nesting colonies in the U.S. Over a million seabirds, including common murres, tufted puffins, cormorants, and storm-petrels nest here. These refuges also provide coastal rocks for harbor seals, Steller and California sea lions to breed and rest.

Three of the refuges are estuarine – Nestucca Bay, Siletz Bay, and Bandon Marsh. They include saltmarsh, brackish marsh, riparian wetlands and wooded uplands and are habitat for fish and waterfowl, shorebirds, raptors, small mammals, amphibians and anadromous fish.

Inland, Oregon has freshwater marshes, bogs, fens, wet prairies and spruce swamps. Like most states, oregon has lost over half of its native wetlands from development that started when the first settlers arrived in the 1800s. Wetlands are home to a wide variety of birds, mammals, amphibians, reptiles, fish and insects. Some endangered wetland animals include: coho salmon, spotted frogs, western pond turtle, upland sandpiper and sandhill cranes.

To learn more about Oregon's Natural Communities go to: LINK 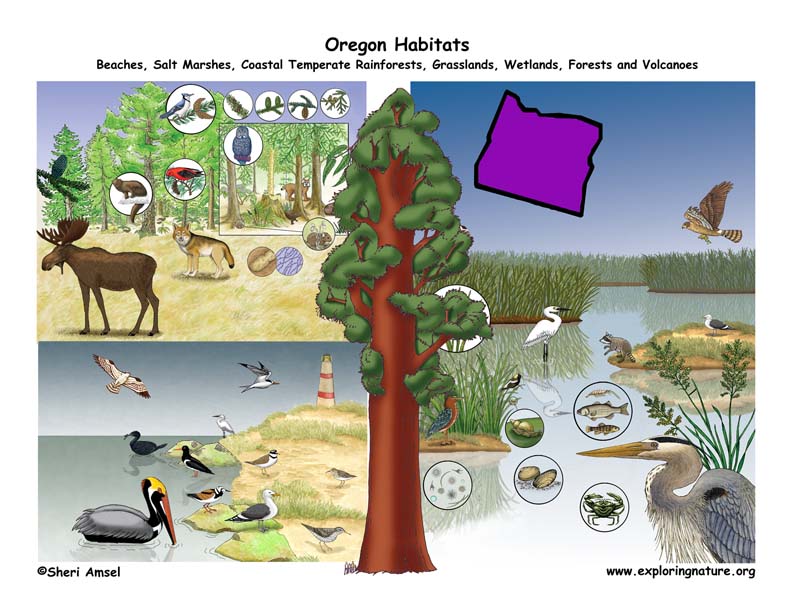 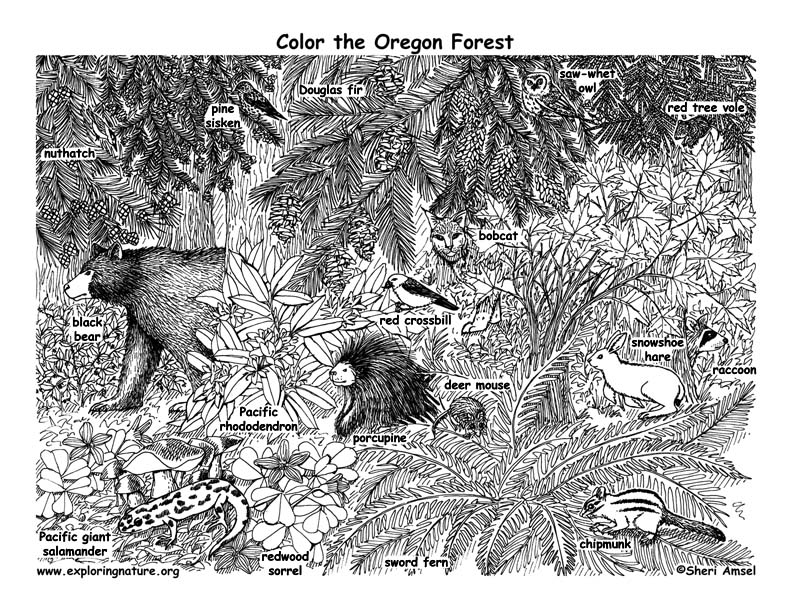 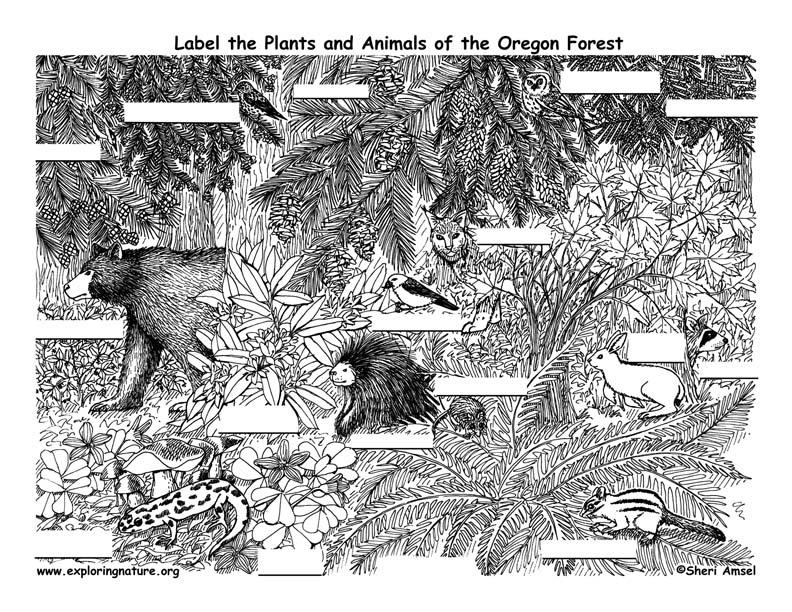 For more information about Oregon's mammals (including Latin names) click on individual animal links or for another resource: LINK 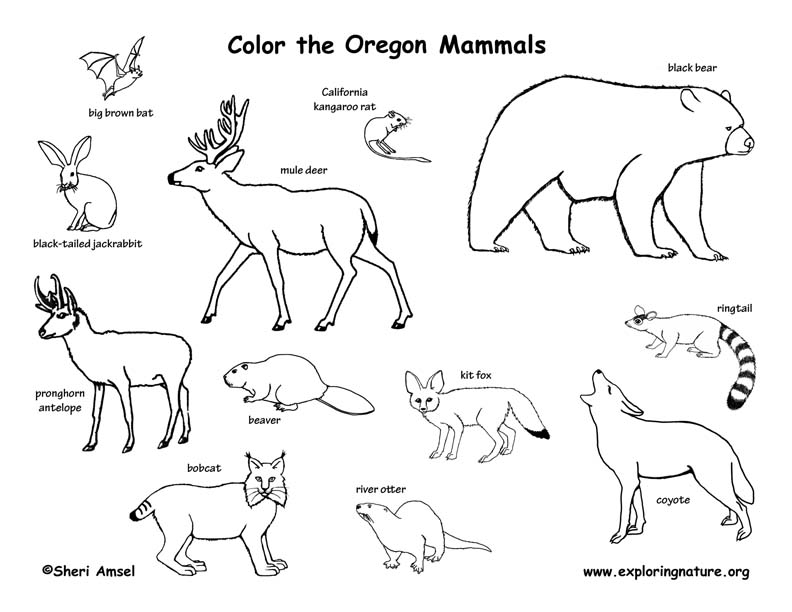 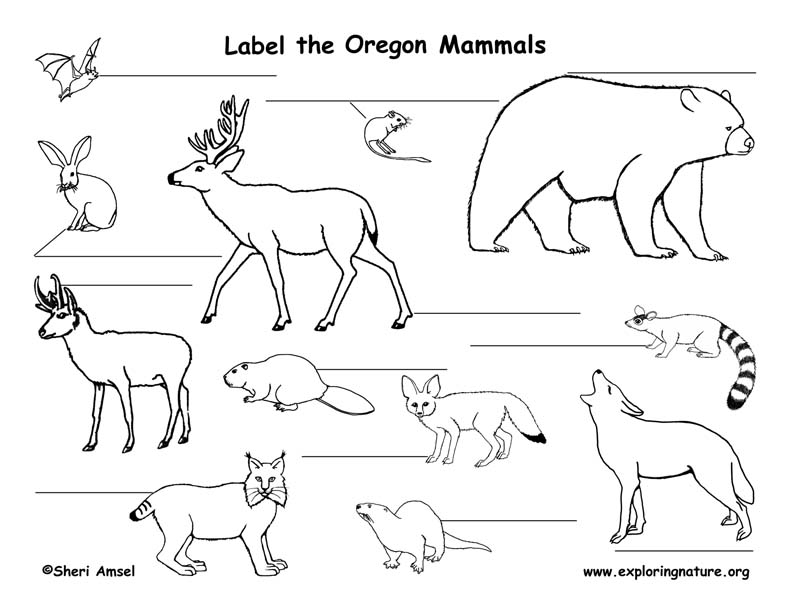 For more information about Oregon's amphibians and reptiles (including Latin names) click on individual animal links or for another resource: LINK 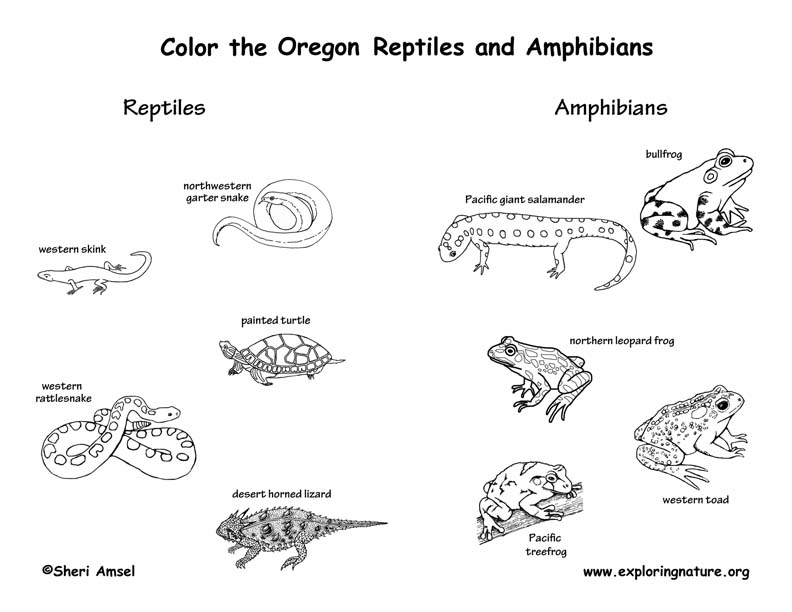 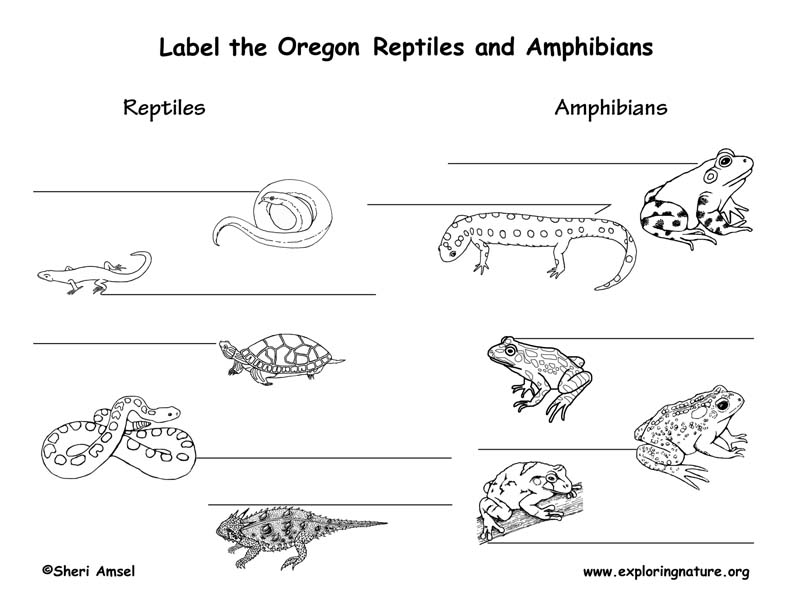 For more information about Oregon's birds (including Latin names) click on individual animal links or for another resource: LINK 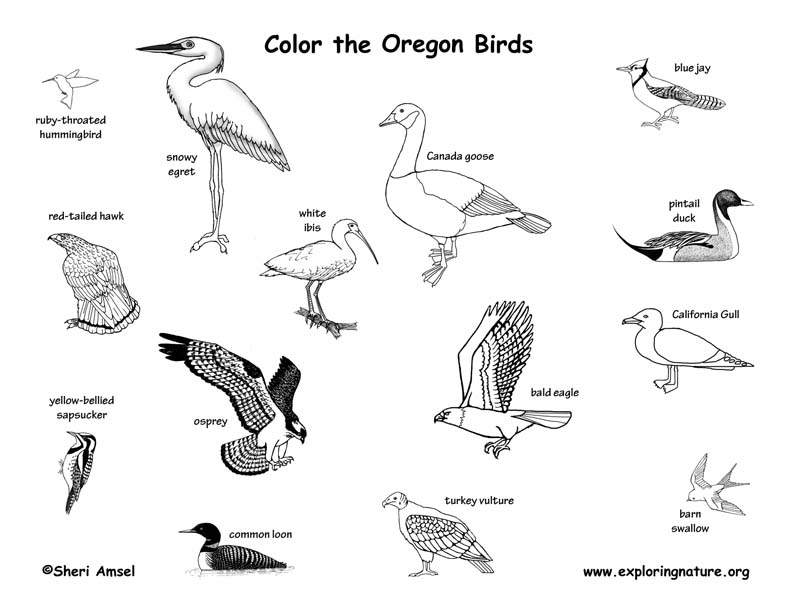 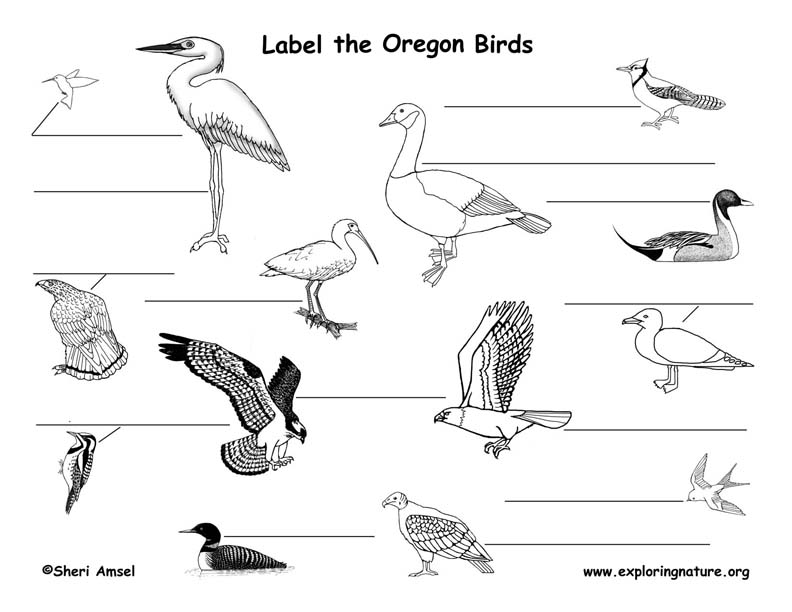 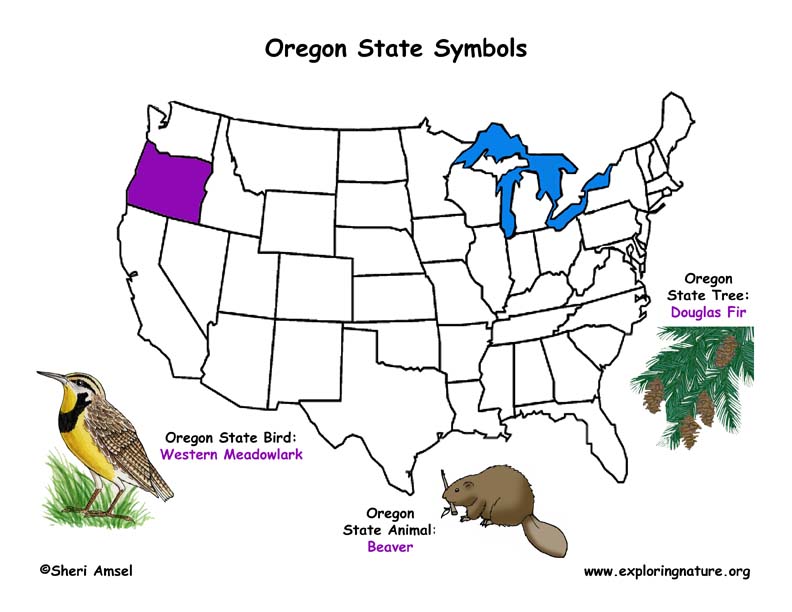 ©2005-2022 Sheri Amsel. All rights reserved.
The material on this site may not be reproduced, distributed, transmitted, cached or otherwise used for anything other than free educational use. It is not to be used for sale or profit of any kind. If you are unsure whether your use of site materials violates the exploringnature.org copyright, contact Sheri Amsel for prior written permission at sheri@exploringnature.org. Thank you for respecting copyright laws.
Site Developed by Eli Madden
Page ID: 812
IP: 44.201.95.84