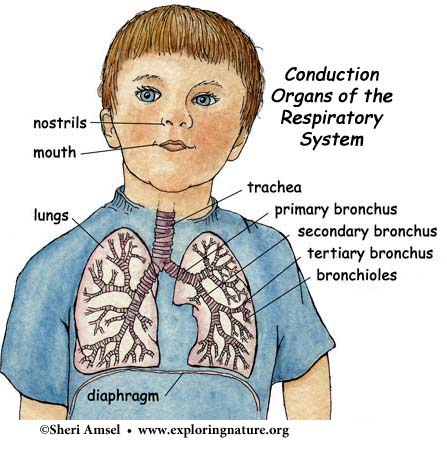 The nose is the only part of the respiratory system that you can see. It is where air enters but it is also where air is warmed, made moist, filtered and cleaned, and smelled.

The pharynx is just a passageway for air to pass through, but it is ringed by tonsils that trap and kill bacteria that come in with the air.

The larynx is a doorway. When food is passing through the pharynx, the larynx closes. When we inhale air, it is open and passes through toward the lungs. The larynx also has the vocal cords which make sound for speech.

After air passes through the larynx, it enters the trachea. The trachea (windpipe) is about 4 inches long (12 cm) and is kept open by tiny rings of stiff cartilage. The last ring of cartilage is called the carina and is covered by sensitive tissue. If you inhale anything but air, when it touches the carina, you cough violently until it is gone. This protects the lower airways from being blocked.

The trachea splits at the bottom to become the two bronchi, one for each lung. The right and left bronchi enter the lungs and branch many times into smaller and smaller bronchioles before reaching the tiny ends where oxygen exchange happens. 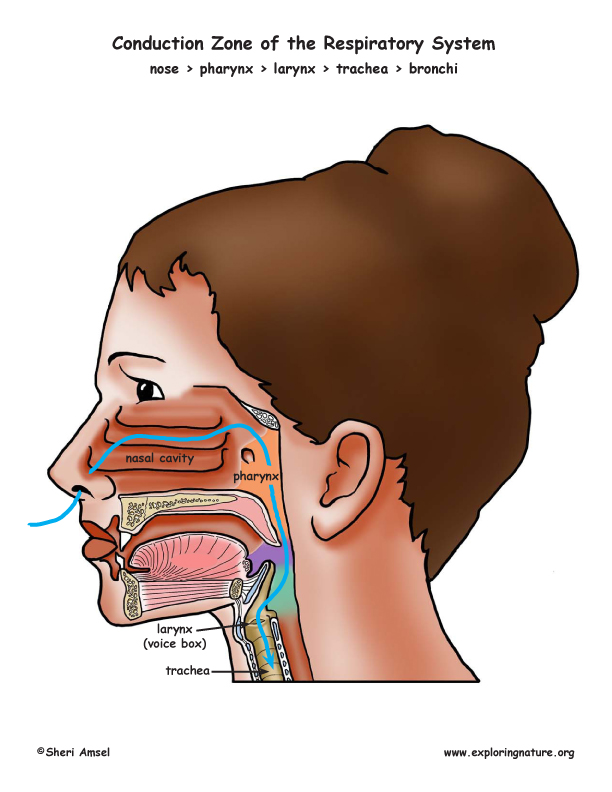 ©2005-2021 Sheri Amsel. All rights reserved.
The material on this site may not be reproduced, distributed, transmitted, cached or otherwise used for anything other than free educational use. It is not to be used for sale or profit of any kind. If you are unsure whether your use of site materials violates the exploringnature.org copyright, contact Sheri Amsel for prior written permission at sheri@exploringnature.org. Thank you for respecting copyright laws.
Site Developed by Eli Madden
Page ID: 3770
IP: 44.197.197.23