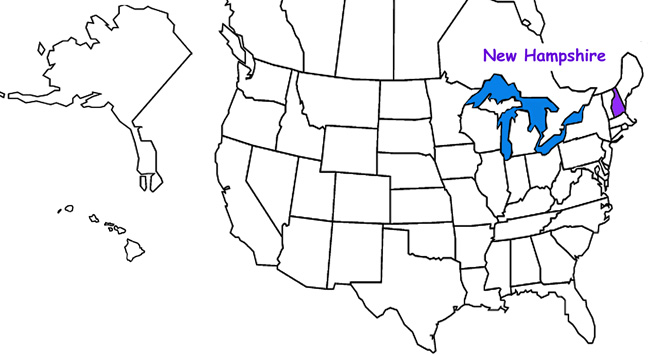 New Hampshire is a state with many habitats: mountains, forests, wetlands, tidal habitats, coastal islands, and many lakes, rivers and ponds.

Mountains
The White Mountains of New Hampshire include the great Mount Washington at 6288 feet (1917 m) – the tallest mountain in the Northeastern U.S. The mountains that reach "above treeline" at about 4,900 feet are exposed to extreme conditions of wind, cold and fog. They are also often topped by alpine habitat with low-lying plants and the animals that can tolerate such severe conditions like  the American pipit, the rare White Mountain arctic butterfly and White Mountain fritillary.

Forests
In southern New Hampshire, along the Connecticut River are Appalachian oak-pine forests with hickory, sugar maple, and mountain laurel in the understory. This habitat used to be maintained by fire which was good for the diversity of animal and plant species until development forced fire suppression and this natural cycle was disturbed.

The most common forest type in New Hampshire is hemlock-hardwood-pine forest covering almost half the state. Tree species found there include hemlock, white pine, beech, and oak. These forests provide habitat for wildlife like black bear, bobcat, hawks, bats and songbirds.

At high-elevation between 2,500 and 3,500 feet are spruce-fir forests. These are found on upper mountain slopes and ridge tops and are exposed to harsh climate and acid rain. Red spruce, balsam fir, and paper and yellow birches are all found in this habitat. Also found are Canada lynx, American marten, spruce grouse and Bicknell's thrush. This is a relatively small part of the state (about 4%) and few people visit or so affect this habitat - except when installing energy and communication infrastructure.

At lower elevations there are lowland spruce-fir forests (1,000 and 2,500 feet) covering about 10% of the state with red spruce, balsam fir, hobblebush, and bunchberry. It is rich with more than 100 species of vertebrate animals like black bear, bobcat, mink, raccoon, weasel, bats, deer, snowshoe hare, grouse, etc. This is also the habitat where several species that are endangered in the state live, including the Canada lynx, American three-toed woodpecker and American marten.

Northern hardwood conifer forests are found mostly at between 1,400 and 2,500 feet in central and northern New Hampshire and cover about 20% of the state. They have hardwood trees such as American beech, sugar maple, yellow birch, and conifer trees such as eastern hemlock, white pine, and balsam fir. This habitat is dotted with many lakes and rivers where we find bald eagles nesting. There are also cliffs where peregrine falcons nest above forests where they hunt. In the understory are striped maple, witch hazel and hobblebush shrubs. On the forest floor are wild sarsaparilla, starflower, and blue-bead lily.

Floodplain Forest
Floodplain forests are found next to river channels and flood periodically, protecting the lands from erosion and sediment and helping water quality by filtering and absorbing pollution that comes with floodwaters. Many animals are found in the floodplain like beaver, mink, otter, hawks, salamanders, frogs and turtles. Because of the filtering of nutrients, floodplain forests have rich soils and have been developed into farmland for centuries and are lost as wildlife habitat. They were also destroyed by commercial development along rivers in the form of dams and home development.

Coastal Islands
New Hampshire's rocky coastal islands are covered by grasses, herbaceous plants, and shrubs. There are rocky outcrops with few trees. These island habitats are used by migrating birds, some over-wintering. Certain islands (Seavey and White Islands) are breeding grounds for roseate, least, and common terns - all endangered in the state. Seals are seen on the shores of the islands and barnacles coat the rocks. These isolated habitats are sometimes over-populated by introduced predators such as gulls and threatened by too many human visitors.

Grasslands
New Hampshire's present day grasslands are found mostly in developed areas: parks, golf courses, airports, capped landfills and agricultural fields. Though most plants growing in New Hampshire's grasslands today are non-native grasses introduced by humans for agricultural uses like timothy, Kentucky bluegrass, orchard grass and perennial ryegrass, some native grasses and wildflowers can be found. They include big bluestem and little bluestem, goldenrod and aster. Historically, New Hampshire is a forested state. Most of today's grasslands are the result of land clearing and require maintenance. If left alone, these habitats will grow back into shrubs and small trees, reverting eventually to forest.

Marsh and Shrub Wetlands
Wetlands are important for filtering pollutants preventing them from getting into local streams and help hold water to reduce flooding. They are also important habitat for wildlife like red-winged blackbirds, beavers, painted, snapping, spotted, and Blanding's turtles, New England cottontails, northern harriers, pied billed grebes and many others. New Hampshire's freshwater wetlands include wet meadows, emergent marshes, and scrub-shrub wetlands. Many wetlands are threatened by invasive plants like purple loosestrife and Japanese knotweed that compete with native vegetation.

Wet meadows of sedges and grasses may not be flooded all year, but are often wet in the spring and summer providing rich habitat for reptiles like the ribbon snake and spotted turtle.
Marshes contain emergent plants (growing out of water) like cattails, pickerelweed, and water lilies. This is habitat for animals like the Blanding’s turtle, American black duck and red-winged blackbird.
Shrub wetlands are thickets of shrubs and young trees growing out of wet soils, and they often flood in the spring providing food, cover and breeding habitat for animals like the spotted turtle, Canada warbler, New England cottontail, and American woodcock.

New Hampshire's saltwater wetland, the salt marsh are full of grassy vegetation that are salt-tolerant and adapted to fluctuating water levels with the rise and fall of the tides. They are a transition zone between ocean habitats and the land and help protect coastal areas from storm surges. They are a rich habitat providing homes, feeding and breeding ground for a myriad of mammals, birds, fish, amphibians, reptiles  and insects. Some examples are the American bittern, Nelson's sharp-tailed sparrow, salt marsh sharp-tailed sparrow, seaside sparrow, and semipalmated sandpiper. It is estimated that up to 50% of New Hampshire's salt marsh has been lost to development. 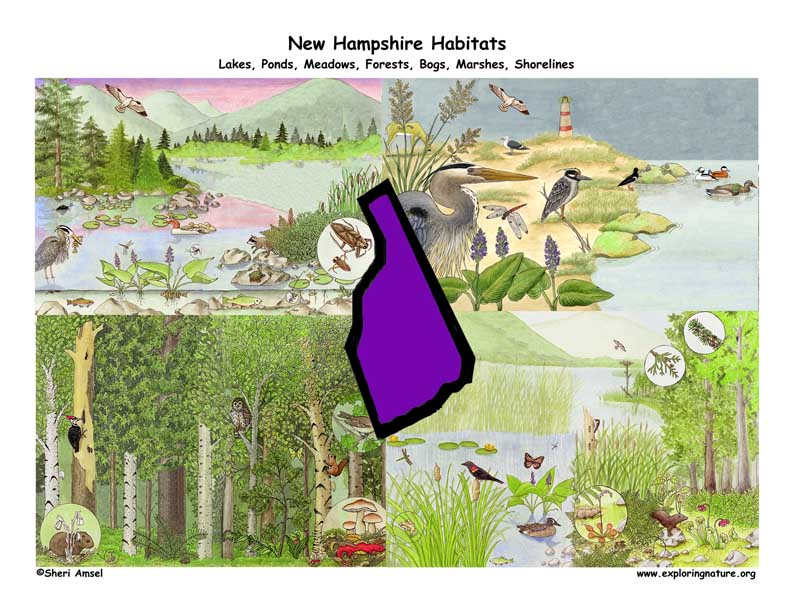 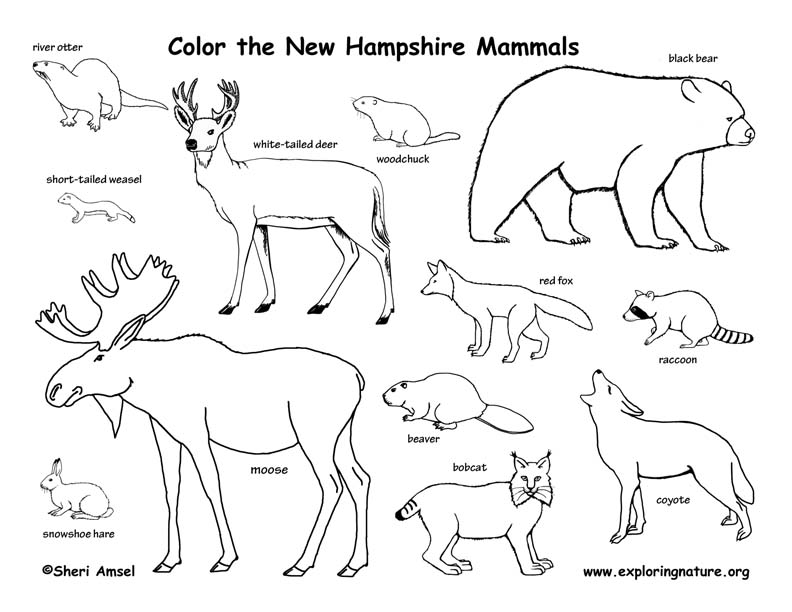 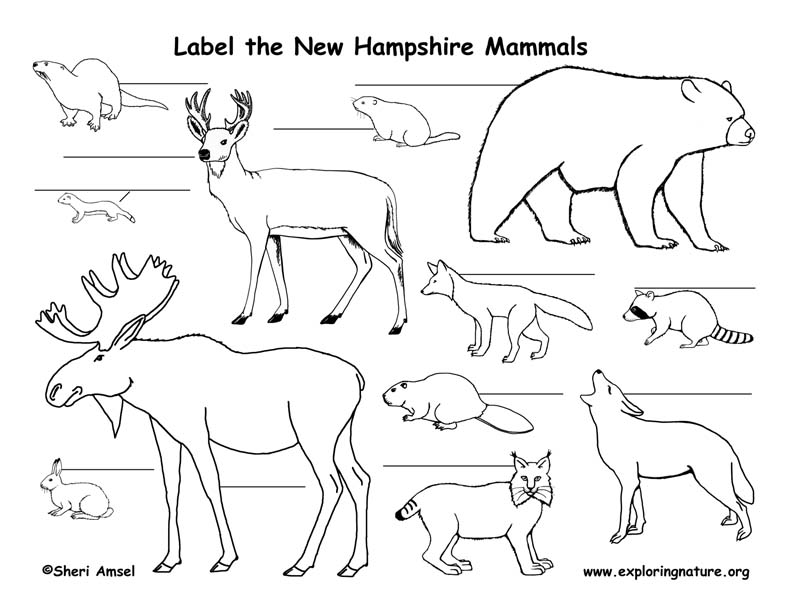 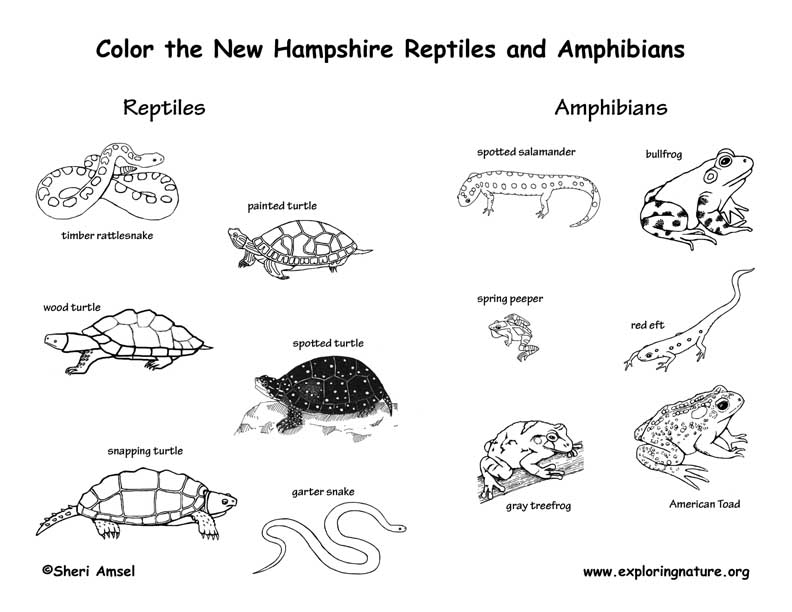 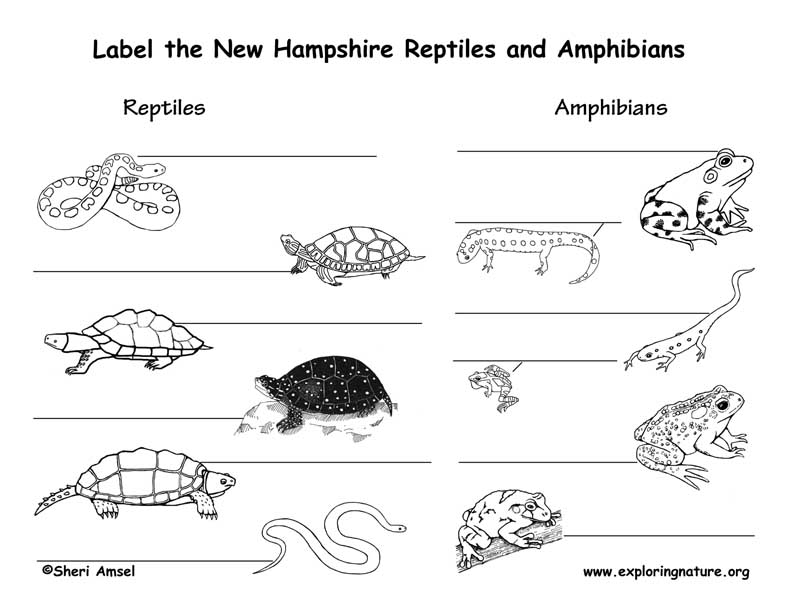 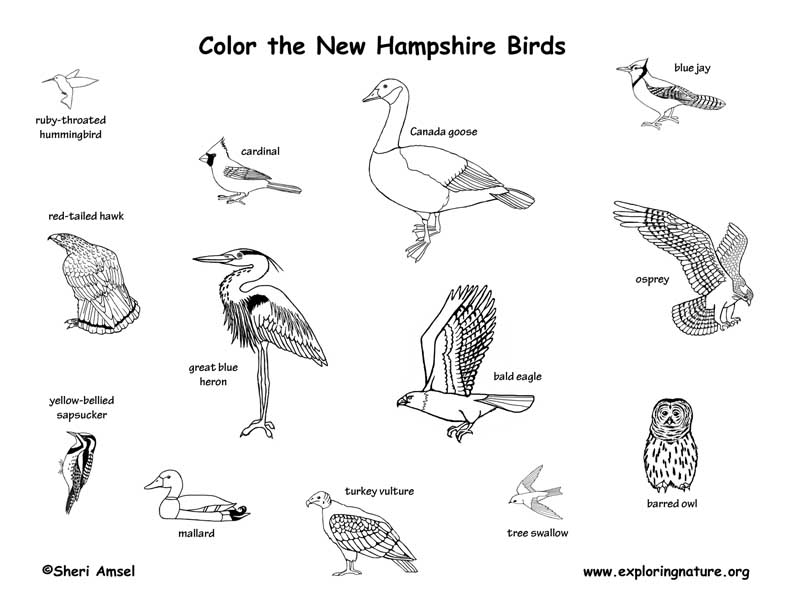 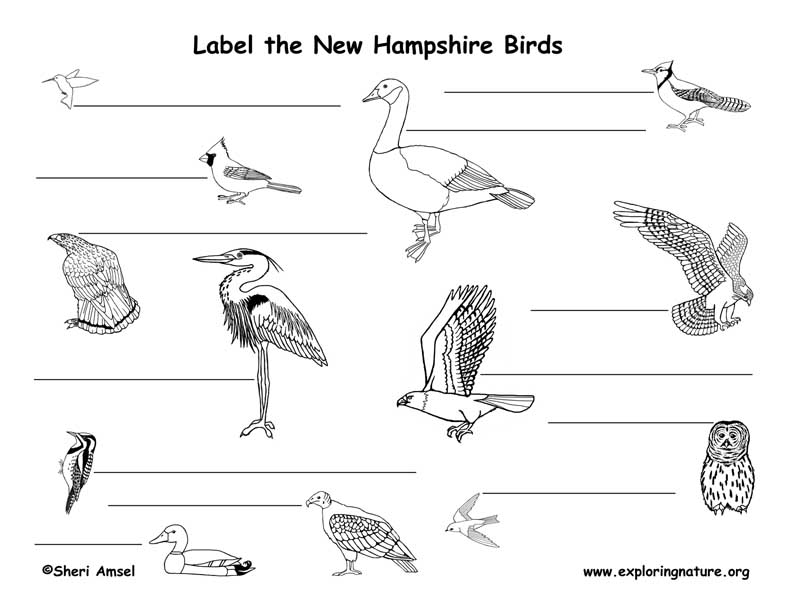 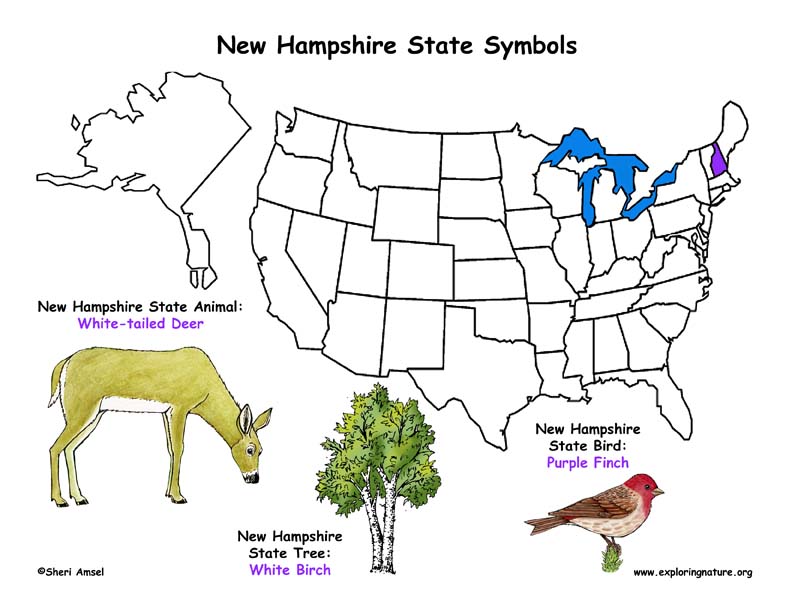 ©2005-2022 Sheri Amsel. All rights reserved.
The material on this site may not be reproduced, distributed, transmitted, cached or otherwise used for anything other than free educational use. It is not to be used for sale or profit of any kind. If you are unsure whether your use of site materials violates the exploringnature.org copyright, contact Sheri Amsel for prior written permission at sheri@exploringnature.org. Thank you for respecting copyright laws.
Site Developed by Eli Madden
Page ID: 810
IP: 18.208.132.74