The central nervous system (CNS) is the brain and the spinal cord – which runs down your back inside the bony vertebral column. The CNS receives the information, decides what to do with it and gives the orders. 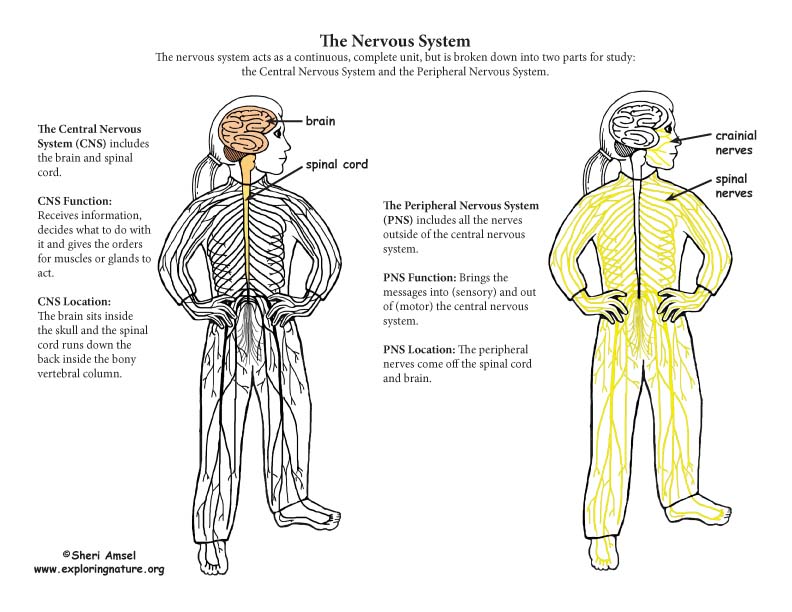 The Central Nervous System
The Brain
The average brain weighs less than 4 pounds. It is soft and pink and wrinkled like a walnut. The brain has three major parts – the cerebrum, the cerebellum and the brain stem. The brain is shaped like a mushroom with the brain stem as the stalk and the cerebrum as the cap of the mushroom drooping down and closing over the top of the stalk. The cerebellum sits in back inside and under the cap. The cerebrum is the largest part of the brain. It makes up about 85%. It has two matching sides, or hemispheres, that are connected in the middle. Again, it looks like the inside of a walnut. Like a walnut it is also covered with twisting ridges and grooves.

The Cerebrum
The cerebrum is different on the outside than it is on the inside. It has an outer layer, like the bark of a tree that is called the cerebral cortex and is gray in color, so is also called the gray matter. The gray matter is where all the nerve cell bodies are found. The inner part of the cerebrum is mostly white. This is where all the nerve cell axons run from the cell bodies (in the gray matter) down through the spinal cord on their way to other parts of the body.

The brain is not just about how smart you are. It also contains your entire personality and memories. The gray matter in the cerebrum is where the human personality lives. This part of your brain allows you talk, listen and understand what people are saying to you. It lets you remember what you had for breakfast this morning or did for your birthday last year. It is where you understand things around you like heat, cold, smells, and sights, and where you decide what to do about them.

For example, if you suddenly realized that you smelled smoke, you might wonder for a few seconds what it was, but then you would understand and spring into action. You would jump up to see where it was coming from and if there was a fire you needed to put out or escape from. This is what your gray matter  – your cerebral cortex – does for you.

The Cerebellum
The cerebellum is a small, rounded part of the brain found in the back underneath the bulging of the cerebrum. It is only about a tenth of the brain, but a very important. Its job is to coordinate all your movements without you even thinking about it. Like an engine with many moving parts, the cerebellum helps your body put together balance and movement with what you need to do.

Think of all the muscles, nerves and senses you need just to walk up the stairs. Now how about playing soccer?  If your cerebellum was injured in an accident, every step you take would be jerky and difficult. Your cerebellum keeps you running like a well-oiled machine with many moving parts.

The Brain Stem
The brain stem’s job is to quietly take care of important bodily functions that we don’t think about - like heart rate, breathing, and even coughing. All the messages to and from the brain and body must also pass through the brain stem.

The Spinal Cord
The spinal cord runs from the brain down the back inside the protective vertebral column. It is made up of the very long, thin axons of thousands and thousands of nerve cells bringing their messages to and from the brain and body.

Protection of the CNS

The brain and spinal cord are surrounded and protected by tough layers of tissue called the meninges. There is a cushion of fluid between the brain and spinal cord and the meninges in which they float. This protects them from being banged around when you run and jump. If your brain does get banged, it is called a concussion. This can make you feel dizzy and even pass out. A bad concussion can do damage to your brain.

It is very important to protect the brain from injury. That is why we use bike helmets and wear seatbelts in the car. We only have one brain. As we age our blood vessels (arteries and veins) get more brittle and full of plaque. Sometimes a blood vessel in the brain gets blocked or breaks open and the blood carrying oxygen cannot get to the brain. This is called a stroke where the starved part of the brain can actually die. Since your brain controls everything that you do, this would leave some things not working – like speech or walking.

©2005-2022 Sheri Amsel. All rights reserved.
The material on this site may not be reproduced, distributed, transmitted, cached or otherwise used for anything other than free educational use. It is not to be used for sale or profit of any kind. If you are unsure whether your use of site materials violates the exploringnature.org copyright, contact Sheri Amsel for prior written permission at sheri@exploringnature.org. Thank you for respecting copyright laws.
Site Developed by Eli Madden
Page ID: 1547
IP: 44.210.77.106