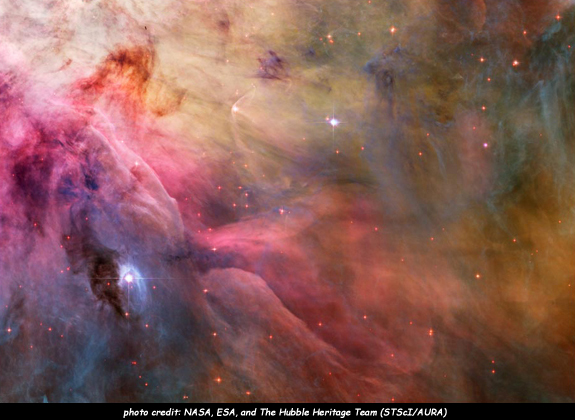 Nebula are huge (a light year wide or more), thick clouds of dust and gas where stars are born or die. Stars form when hydrogen, helium, carbon and silicon are pulled together by gravity into hot clumps. This nebula called Orion. Scientists have even named some of the forming stars. The star a little left of the center up high in the nebula that has a stream of gas flowing around it is called LL Ori. The bright star in the lower left of the nebula is called LP Ori.

©2005-2023 Sheri Amsel. All rights reserved.
The material on this site may not be reproduced, distributed, transmitted, cached or otherwise used for anything other than free educational use. It is not to be used for sale or profit of any kind. If you are unsure whether your use of site materials violates the exploringnature.org copyright, contact Sheri Amsel for prior written permission at sheri@exploringnature.org. Thank you for respecting copyright laws.
Site Developed by Eli Madden
Page ID: 1868
IP: 44.192.38.49