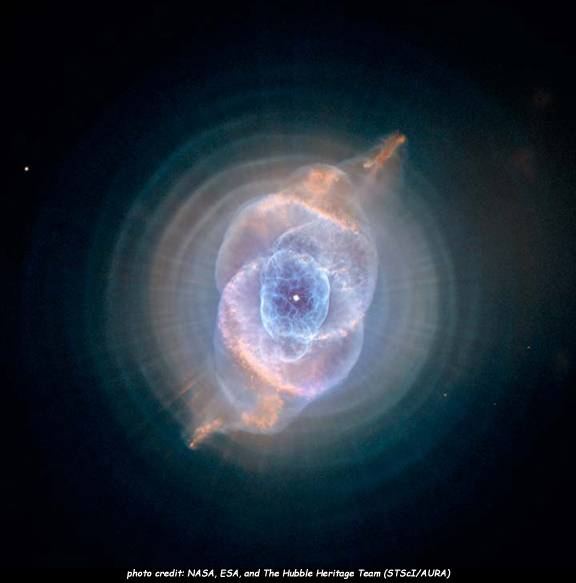 The Cat's Eye Nebula is a planetary nebula that forms when a dying star slowly gives off its outer gas layers. Scientists think the star released its gases in pulses every 1,500-years. These pulses of gas made huge dust shells surrounding the star. These dust shells made layers of rings like an onion around the dying star. In this view of the Cat's Eye Nebula taken by the Hubble Telescope, you can see the rings, like an onion cut in half.

©2005-2023 Sheri Amsel. All rights reserved.
The material on this site may not be reproduced, distributed, transmitted, cached or otherwise used for anything other than free educational use. It is not to be used for sale or profit of any kind. If you are unsure whether your use of site materials violates the exploringnature.org copyright, contact Sheri Amsel for prior written permission at sheri@exploringnature.org. Thank you for respecting copyright laws.
Site Developed by Eli Madden
Page ID: 1862
IP: 44.192.247.184