LS1.D: Information Processing
• Each sense receptor responds to different inputs (electromagnetic, mechanical, chemical), transmitting them as signals that travel along nerve cells to the brain. The signals are then processed in the brain, resulting in immediate behaviors or memories. (MS-LS1-8)

Engaging in Argument from Evidence
Engaging in argument from evidence in 6–8 builds on K–5 experiences and progresses to constructing a convincing argument that supports or refutes claims for either explanations or solutions about the natural and designed world(s).
• Use an oral and written argument supported by evidence to support or refute an explanation or a model for a phenomenon. (MS-LS1-3)

Obtaining, Evaluating, and Communicating Information
Obtaining, evaluating, and communicating information in 6-8 builds on K-5 experiences and progresses to evaluating the merit and validity of ideas and methods.
• Gather, read, and synthesize information from multiple appropriate sources and assess the credibility, accuracy, and possible bias of each publication and methods used, and describe how they are supported or not supported by evidence. (MS-LS1-8)

Cause and Effect
• Cause and effect relationships may be used to predict phenomena in natural systems. (MS-LS1-8)
Scale, Proportion, and Quantity
• Phenomena that can be observed at one scale may not be observable at another scale. (MS-LS1-1)
Systems and System Models
• Systems may interact with other systems; they may have sub-systems and be a part of larger complex systems. (MS-LS1-3)
Structure and Function
• Complex and microscopic structures and systems can be visualized, modeled, and used to describe how their function depends on the relationships among its parts, therefore complex natural structures/systems can be analyzed to determine how they function. (MS-LS1-2)

Connections to Engineering,Technology and Applications of Science

Science is a Human Endeavor
• Scientists and engineers are guided by habits of mind such as intellectual honesty, tolerance of ambiguity, skepticism, and openness to new ideas. (MS-LS1-3)

MS.Structure, Function, and Information Processing
Students who demonstrate understanding can:

MS-LS1-2. Develop and use a model to describe the function of a cell as a whole and ways parts of cells contribute to the function. [Clarification Statement: Emphasis is on the cell functioning as a whole system and the primary role of identified parts of the cell, specifically the nucleus, chloroplasts, mitochondria, cell membrane, and cell wall.] [Assessment Boundary: Assessment of organelle structure/function relationships is limited to the cell wall and cell membrane. Assessment of the function of the other organelles is limited to their relationship to the whole cell. Assessment does not include the biochemical function of cells or cell parts.]

MS-LS1-3. Use argument supported by evidence for how the body is a system of interacting subsystems composed of groups of cells. [Clarification Statement: Emphasis is on the conceptual understanding that cells form tissues and tissues form organs specialized for particular body functions. Examples could include the interaction of subsystems within a system and the normal functioning of those systems.] [Assessment Boundary: Assessment does not include the mechanism of one body system independent of others. Assessment is limited to the circulatory, excretory, digestive, respiratory, muscular, and nervous systems.]

MS-LS1-8. Gather and synthesize information that sensory receptors respond to stimuli by sending messages to the brain for immediate behavior or storage as memories. [Assessment Boundary: Assessment does not include mechanisms for the transmission of this information.]

LE 5.1a Animals and plants have a great variety of body plans and internal structures that contribute to their ability to maintain a balanced condition.

LE 5.1b An organism’s overall body plan and its environment determine the way that the organism carries out the life processes.

LE 5.1g The survival of an organism depends on its ability to sense and respond to its external environment. 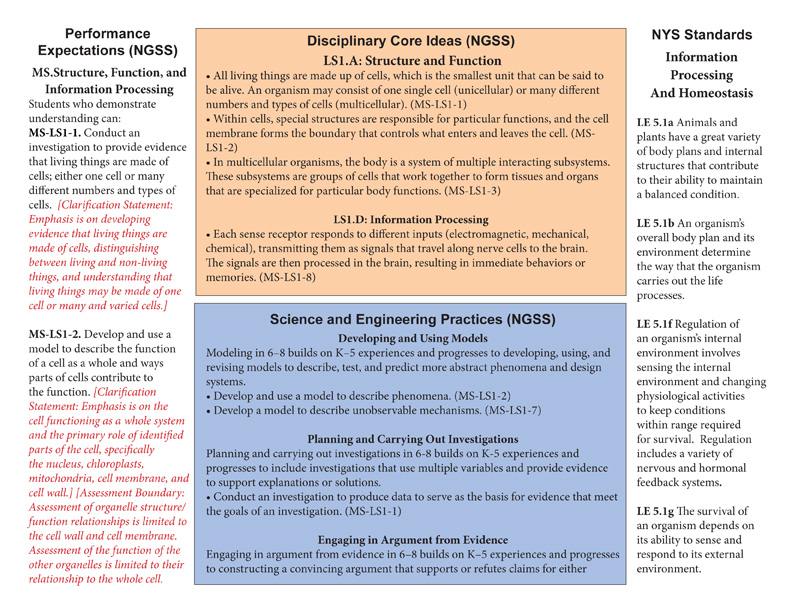 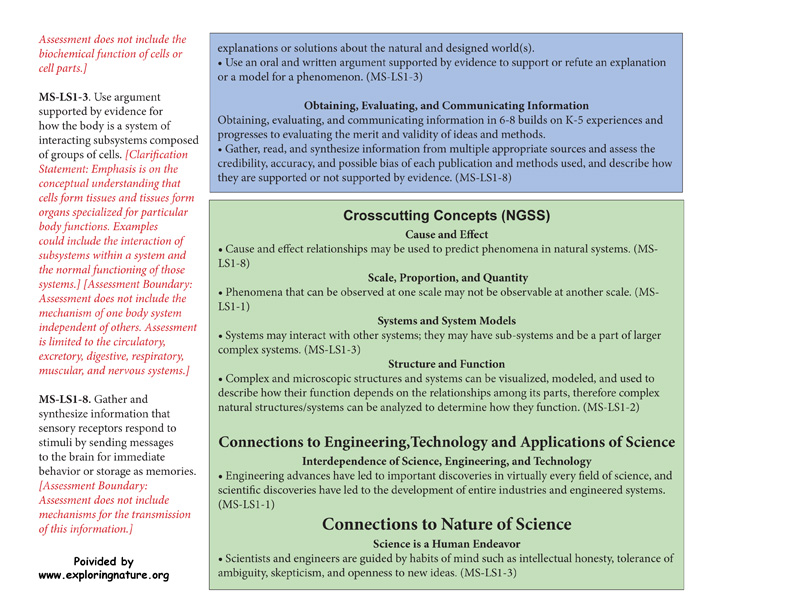 ©2005-2022 Sheri Amsel. All rights reserved.
The material on this site may not be reproduced, distributed, transmitted, cached or otherwise used for anything other than free educational use. It is not to be used for sale or profit of any kind. If you are unsure whether your use of site materials violates the exploringnature.org copyright, contact Sheri Amsel for prior written permission at sheri@exploringnature.org. Thank you for respecting copyright laws.
Site Developed by Eli Madden
Page ID: 1919
IP: 3.238.204.167