Organisms exactly copy and distribute their DNA during every cell division. This is called replication. When DNA is ready to multiply, its double helix unwinds and unzips. A new strand will form and bond with the complementary nucleotide base pairs for each side. This results in two DNA double helices that are identical to the first.

A mutation is a change in that genetic information. A mutation can be harmful to an organism, but it can also be beneficial, or have no effect at all. Mutations can occur from errors during replication or from environmental factors – exposure to chemical, radiation, etc., collectively called mutagens.

Sometimes there are small changes in the code called single nucleotide polymorphisms (SNPs). SNPs are rare, but they can account for small variations in populations of organisms. Several SNPs together might increase an organism’s susceptibility to disease.

Because much of our DNA codes for amino acids that will build specific proteins that the body needs, if a mutation occurs in a protein sequencing area, it can produce a different protein than the body intended. Most amino acids are represented by more than one set of code (a three nucleotide sequence called a codon), so a single nucleotide change may not affect the resulting protein. An error in code that chooses the wrong amino acid, however, could result in a protein that is completely wrong for its function. This might cause structural deformities and even death to an organism.

The effects of a mutation on an organism’s phenotype can vary.
1) If the mutation is in a non-coding stretch of DNA or doesn’t affect the resulting protein, it will have no visible affect on the organism and cause no change to its phenotype.
2) Depending upon its location, a mutation can cause a slight change to the phenotype.
3) If a mutation occurs in a sequence of DNA that codes for a protein that is vital for a body structure or functionality, it can have a major affect on the phenotype of the organism and could, in fact, be lethal.

Mutations can be beneficial to an organism and in germline mutations affect their offspring and the their populations in a positive way. Though it doesn’t help humans, mutations in bacteria led to their resistance to certain antibiotics over time. A mutation that benefits humans is the resistance to malaria that people with a mild form of sickle cell anemia (HbC hemoglobin) experience. Mutations are considered essential for evolutions as they increase genetic variation in populations of organisms and lead to natural selection.

Harmful mutations can lead to hereditary diseases, such as Huntington’s disease, cystic fibrosis, sickle cell anemia, and even certain cancers. 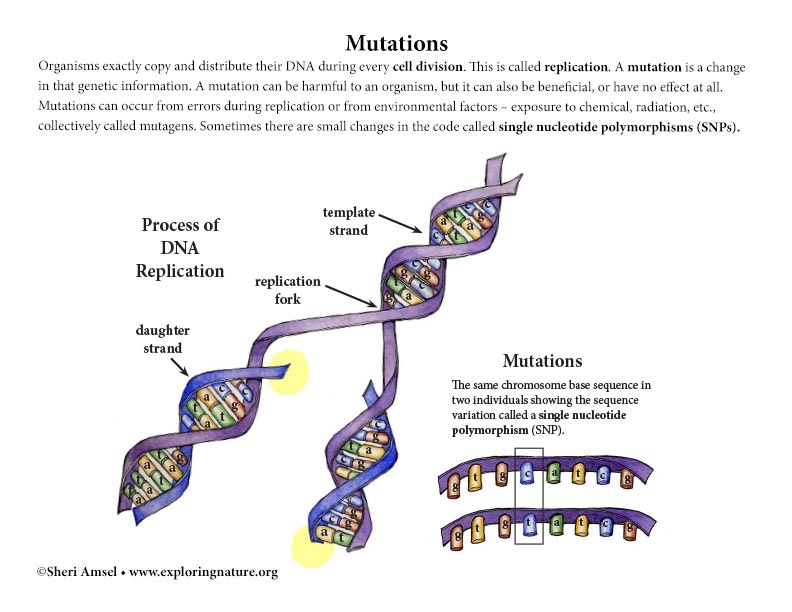 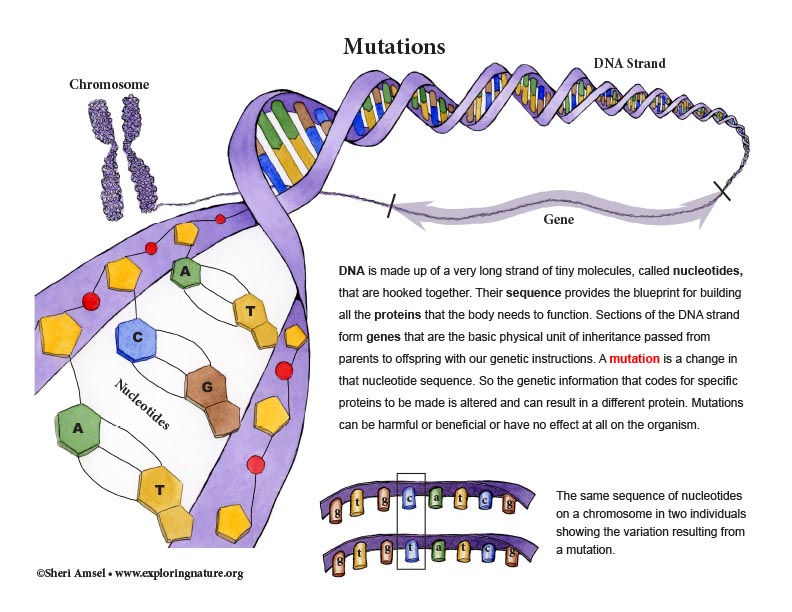 NEXT GENERATION SCIENCE STANDARDS (NGSS)
LS3.A: Inheritance of Traits - Changes (mutations) to genes can result in changes to proteins, which can affect the structures and functions of the organism and thereby change traits.

Performance Task:
MS-LS3-1. Develop and use a model to describe why structural changes to genes (mutations) located on chromosomes may affect proteins and may result in harmful, beneficial, or neutral effects to the structure and function of the organism.

LS3.B: Variation of Traits - In sexual reproduction, chromosomes can sometimes swap sections during the process of meiosis (cell division), thereby creating new genetic combinations and thus more genetic variation. Although DNA replication is tightly regulated and remarkably accurate, errors do occur and result in mutations, which are also a source of genetic variation. Environmental factors can also cause mutations in genes, and viable mutations are inherited. (HS-LS3-2)

HS-LS3-2. Make and defend a claim based on evidence that inheritable genetic variations may result from (1) new genetic combinations through meiosis, (2) viable errors occurring during replication, and/or (3) mutations caused by environmental factors. [Clarification Statement: Emphasis is on using data to support arguments for the way variation occurs.] [Assessment Boundary: Assessment does not include the phases of meiosis or the biochemical mechanism of specific steps in the process.]

©2005-2022 Sheri Amsel. All rights reserved.
The material on this site may not be reproduced, distributed, transmitted, cached or otherwise used for anything other than free educational use. It is not to be used for sale or profit of any kind. If you are unsure whether your use of site materials violates the exploringnature.org copyright, contact Sheri Amsel for prior written permission at sheri@exploringnature.org. Thank you for respecting copyright laws.
Site Developed by Eli Madden
Page ID: 6214
IP: 18.204.56.185