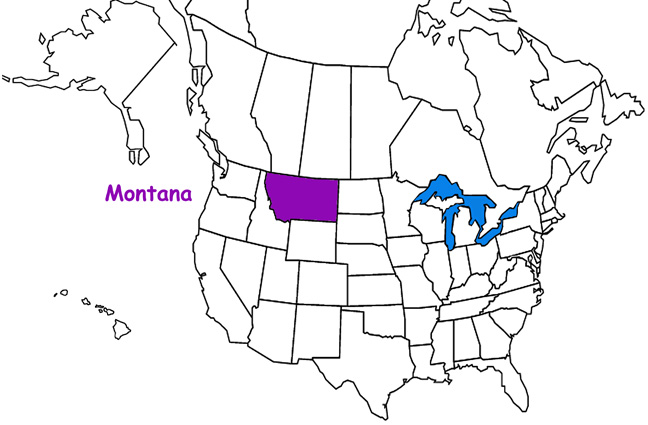 Montana is a large and diverse state with many kinds of natural communities including forests, grasslands, wetlands, scrublands, badlands, arid steppes, and alpine habitats. Because Montana is such a large state, biologists often break down the state into sections to look at its natural communities. Montana\'s forests cover almost a quarter of the state - about 23-million acres, while grasslands cover much of the eastern two-thirds of the state as well as western valleys. Mixed in with the grasslands are other arid habitats like scrublands, sand prairie, and sagebrush steppes. There are also wetlands is the form of river floodplains, conifer swamps (in the western part of the state), open and closed depressional wetlands and Great Plains prairie potholes (in the eastern part of the state) and emergent wetlands (marshes where plants emerge out of the water) found through the state.

Northwestern Montana has coniferous forests that include western hemlocks, red cedars, white firs and white pines. This region has three major river drainages - the Kootenai, Flathead, and Lower Clark Fork River, mountainous valleys and subalpine forests and alpine tundra (above 8,000 feet). Yet in the \"rain shadow\" of the mountains you may also find semiarid grasslands. Because northwestern Montana receives air masses from the Pacific Coast, this region is moist and humid with a lot of rain and heavy snowfall in winter. About 90% of this region is forested. Some of the forest type found here are Rocky Mountain medic montane mixed conifer forest, northern Rocky Mountain lower montane riparian woodland and scrubland, Rocky Mountain conifer swamp and Rocky Mountain dry-mesic montane mixed conifer forest.

The west-central region of Montana is blocked from the Pacific Coast air masses by the Bitterroot Mountain Range, so has drier forests with western larch, ponderosa pine, and western white fir. The Clark Fork River drainage runs through this region, which is about 80% forested. The rest is mostly grasslands spread across low valleys.

The north-central region of Montana includes the northeastern side of the Continental Divide with its slopes of quaking aspen and limber pines. These forests make up only 10% of this region, the rest are grasslands that flow down away from the divide. This region is wind blown for much of the year with very cold temperatures in winter and occasional dramatic warm, dry chinooks that pull moisture off the land.

The central region of Montana includes the eastern side of the Continental Divide and many small mountain ranges including the Elkhorn, Big Belt, Little Belt, Castle, Big Snowy, Little Snowy, Judith, Little Rocky, Bearpaw, and Highwood Mountains. The mountainous regions are covered in ponderosa pines, limber pines, and creeping juniper and make up about 20% of the region, including the Missouri River and Missouri River breaks. The rest are expansive grasslands. This region is also affected by the extreme temperature changes of chinooks.

The southwestern region of Montana straddles the Continental Divide and is made up of cold, dry, rugged terrain. Its forests made up of stout conifers like ponderosa pine, Douglas fir, lodgepole and limber pine and cover about 25% of the region. The rest of the region is made up if semiarid steppes and grasslands.

The south-central region of Montana includes the Bridger, Crazy, Pryor and north end of the Bighorn Mountain Ranges, as well as the Gallatin and Upper Yellowstone River drainages. This stunningly scenic region surrounds the northern side of Yellowstone Park in Montana and includes forest and alpine plateaus. The forests here are lodgepole pine, subalpine fir, spruce, etc. and cover half the region. The other half is grassland. This region is affected by Continental Divide chinook temperature changes, but is moist in nature (and not semiarid like further west).

The southeastern region of Montana has lowland forests made up only of ponderosa pine. These forests, which cover about 20% of the region, are in amongst the expansive (80%) northern Great Plains made up of mixedgrass prairie, sand prairie and big sagebrush steppes. This region includes part of the Yellowstone River drainage along which deciduous trees like white ash, American elm and burr oak live. Some of the forest types found here are called Great Plains Ponderosa Pine Woodland and Savanna, Rocky Mountain Foothill Woodland-Steppe Transition, Rocky Mountain Ponderosa Pine Woodland and Savanna.

The northeastern region of Montana is Great Plains grassland made up of mixedgrass prairie, sand prairie and big sagebrush steppes. Eastern cottonwoods line the rivers and scattered wetlands. There are sparse stands of ponderosa pines scattered around the plains, but the extremely cold, dry winters are not welcoming habitat to trees. These grasslands cover much of the eastern two-thirds of Montana.

Both south and northeastern Montana has good habitat for many animals. Some of the many mammals that make their home in there are white-tailed jackrabbits, thirteen-lined ground squirrels, coyote, badger, weasel, mule and white-tailed deer, red foxes, voles, mice, woodrats and many others. There are also prairie rattlesnakes, gophersnakes, toads, tiger salamanders, owls, hauls, swallows, vultures and ,amy other birds. To learn more about the animals of Montana look at the list below. 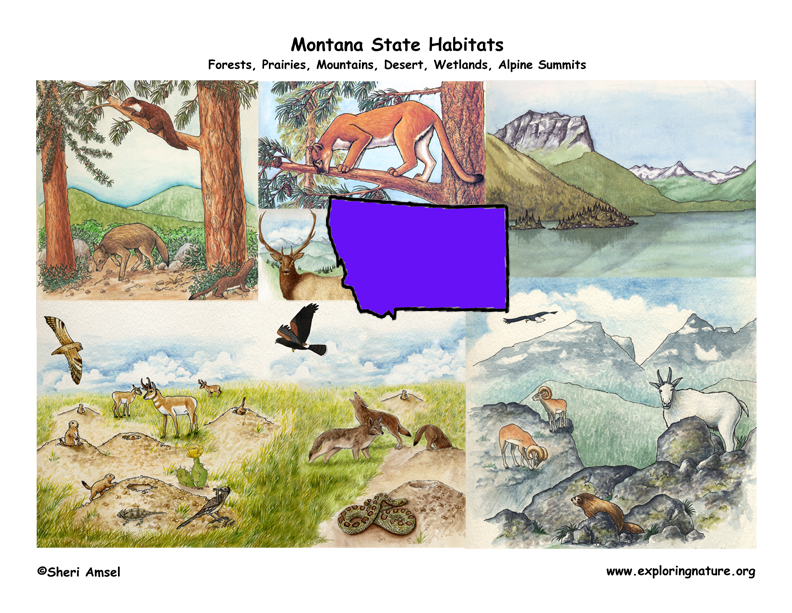 For more information about Montana\'s mammals (including Latin names) click on individual animal links or for another (off-site) resource: LINK 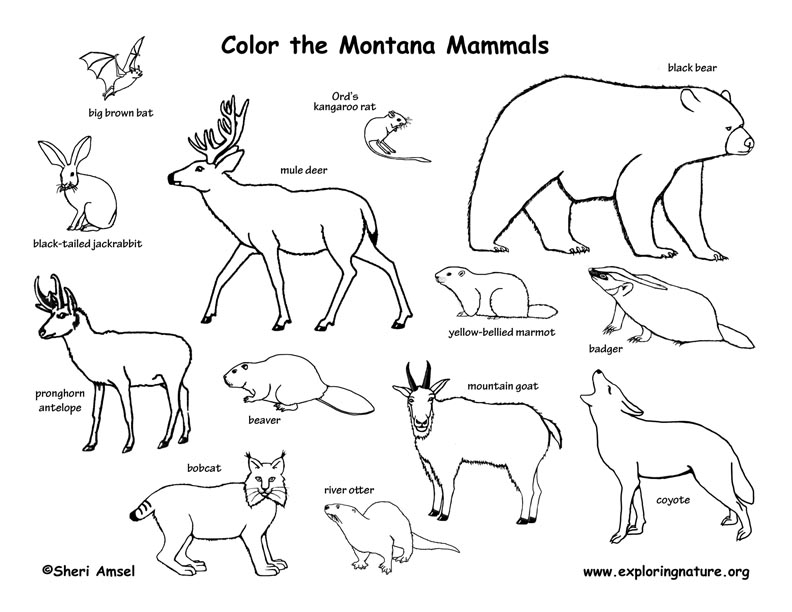 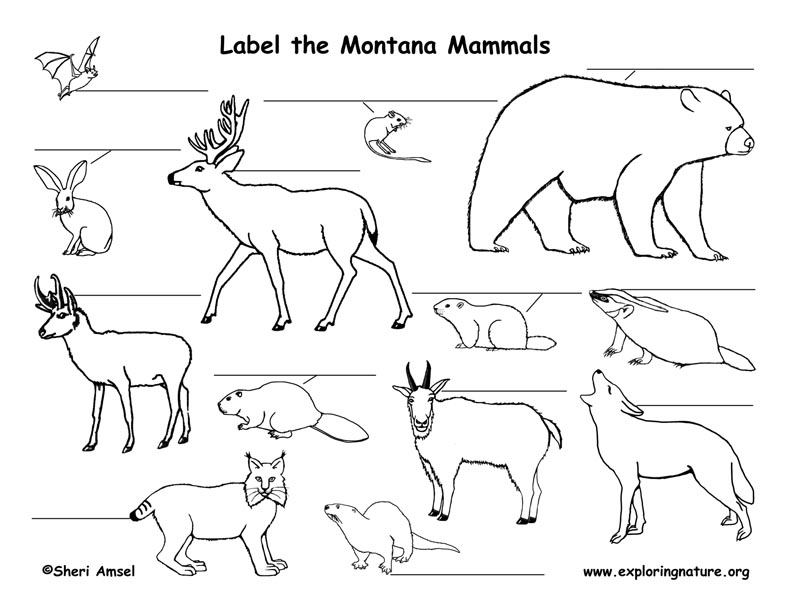 For more information about Montana\'s amphibians (including Latin names) click on individual animal links or for another (off-site) resource: LINK

For more information about Montana\'s reptiles (including Latin names) click on individual animal links or for another (off-site) resource: LINK 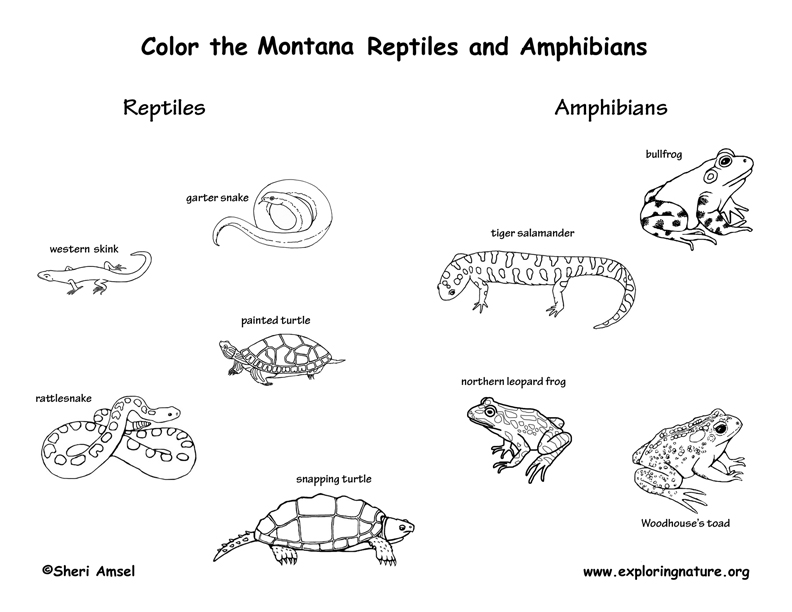 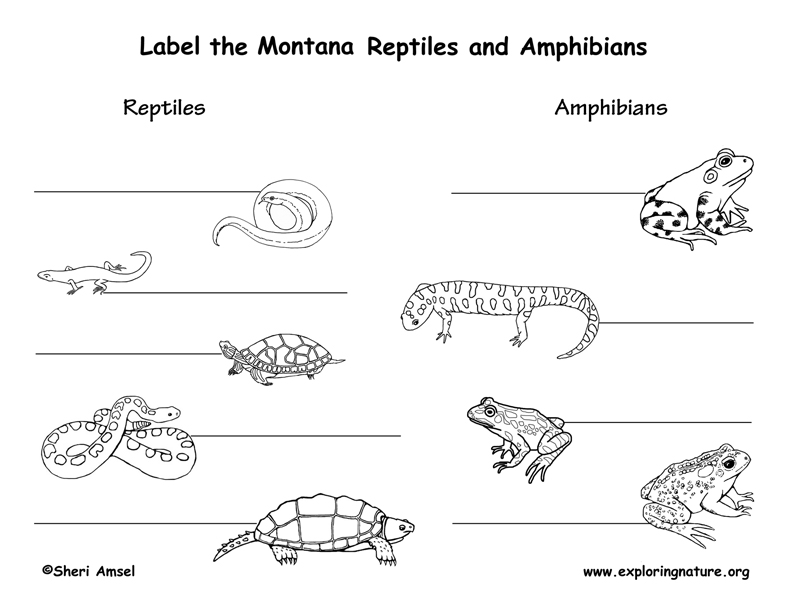 For more information about Montana\'s birds (including Latin names) click on individual animal links or for another (off-site) resource: LINK 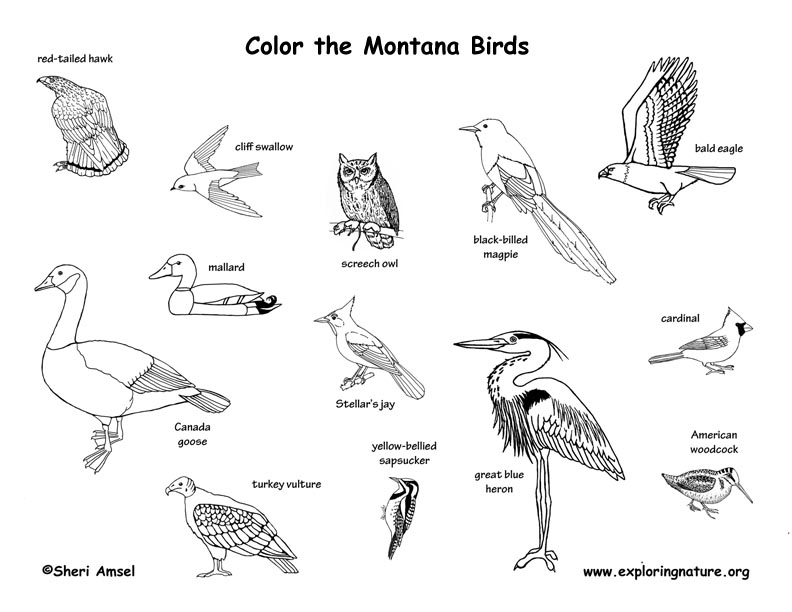 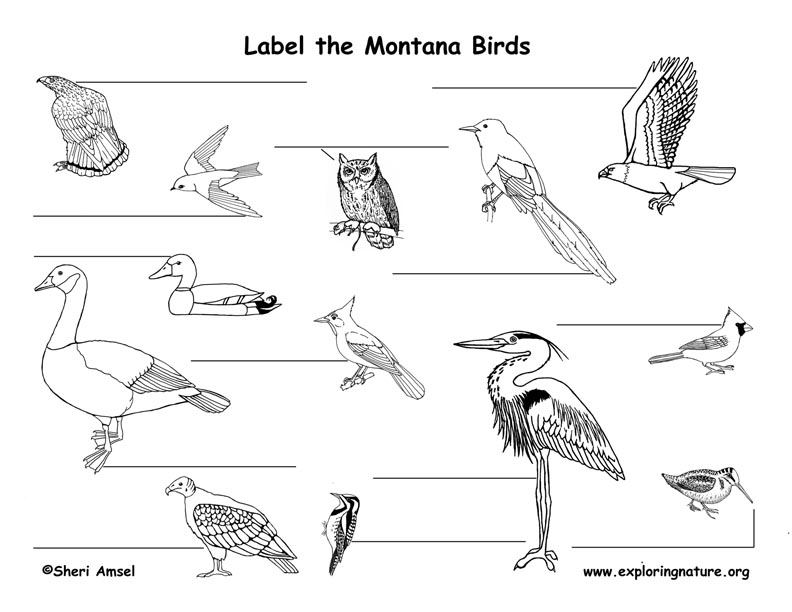 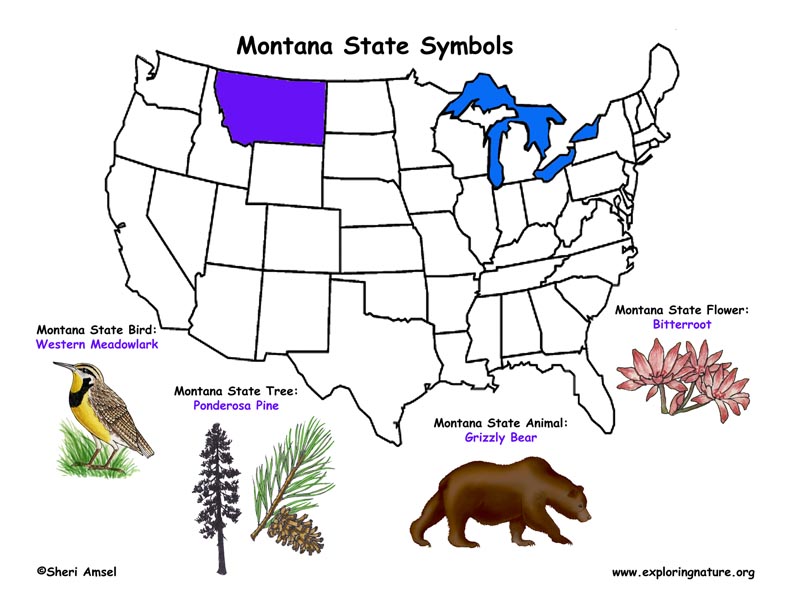 ©2005-2023 Sheri Amsel. All rights reserved.
The material on this site may not be reproduced, distributed, transmitted, cached or otherwise used for anything other than free educational use. It is not to be used for sale or profit of any kind. If you are unsure whether your use of site materials violates the exploringnature.org copyright, contact Sheri Amsel for prior written permission at sheri@exploringnature.org. Thank you for respecting copyright laws.
Site Developed by Eli Madden
Page ID: 814
IP: 35.173.35.14