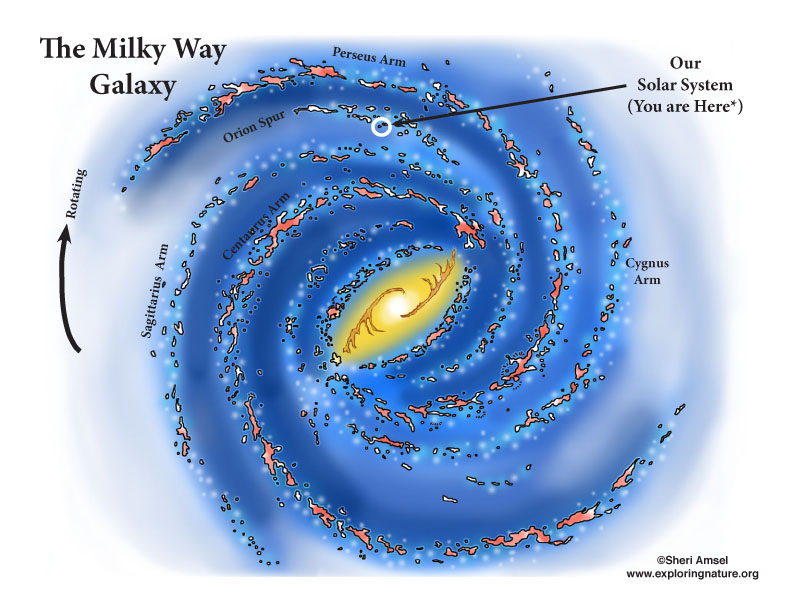 We live in the Milky Way Galaxy, which is just one of millions of galaxies in the Universe. If we could see the Milky Way from space, we would see a spiral galaxy, shaped like a pin-wheel. From Earth, though, the Milky Way looks like a glowing band of light across the sky that is sprinkled with stars.

The Milky Way is a disk galaxy, which means that it’s stars and gas are in a rotating disk, which appears flattened from the side with a bulging center. The building center is called the Galactic Nucleus. This flat plane was first photographed by the Nasa COBE satellite in 1990. (COBE stands for Cosmic Background Explorer).

The Milky Way also contains nebulae, with are huge, thick clouds of dust and gas where stars are born. They look like fuzzy patches of light in the night sky.

Scientists believe that there could be billions of planets orbiting stars in the Milky Way Galaxy. Some may have conditions that could support life, if they are not too hot and not too cold and have water and a protective atmosphere. Scientists call these “Goldilocks Planets.” Are there living things on some of these far away plants? Maybe someday, we will find out.

Hang a Milk Way Galaxy Poster in your classroom.

©2005-2022 Sheri Amsel. All rights reserved.
The material on this site may not be reproduced, distributed, transmitted, cached or otherwise used for anything other than free educational use. It is not to be used for sale or profit of any kind. If you are unsure whether your use of site materials violates the exploringnature.org copyright, contact Sheri Amsel for prior written permission at sheri@exploringnature.org. Thank you for respecting copyright laws.
Site Developed by Eli Madden
Page ID: 5145
IP: 34.231.21.105