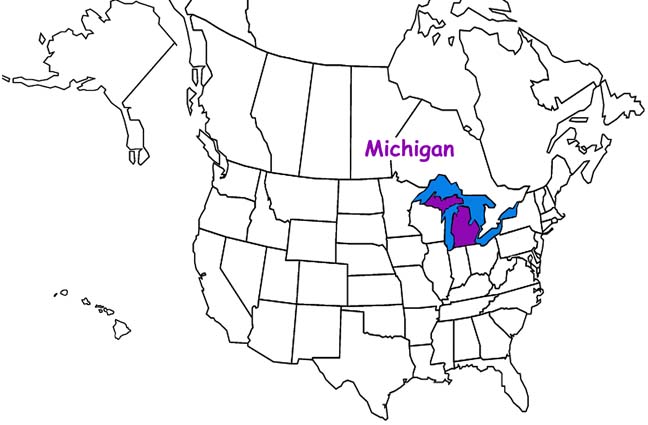 Forest
Michigan is a state shaped by the retreating glaciers and with rich and varied habitats including forests, wetlands, prairies, caves, and Great Lakes shoreline. Before settlement, Michigan was one massive forest, broken only by small grasslands in the southern part of the state. In the late 1800s, the forests of Michigan were cut for lumber and fuel until they were literally gone. Once they had been stripped of lumber, the landowners stopped paying taxes and the land reverted to the state. This gave those forests a chance to recover. They will never return to their original state but they have developed back into healthy diverse forests with large stands of aspen and second growth hardwoods like red maple.Today only about half the state is forested - about 18 million acres. Michigan's state forest is the largest in the U.S. with almost 4 million acres.

Jack pine forests are found on both the upper and lower peninsula of Michigan. These forests have scattered open areas called barrens. These dry, sparse forests often burn and regrow. The fire releases the seeds from the cones. Deciduous hardwood trees like sugar maple, beech, and basswood are found throughout the state. Oaks and hickories are found mostly on the Lower Peninsula and are sensitive to frigid northern temperatures. As you move north, there are more conifer trees like balsam fir, spruce, tamarack, hemlock, and white, red, and jack pine that can tolerate deep snow and cold. The deciduous trees that can tolerate the colder northern part of the state are the birches, balsam poplars and quaking aspen.


Wetlands
Wetlands are very important habitats. They provide valuable wildlife habitat, stabilize shorelines and protect the land from storm surges and flooding. They act as filters to pollutants that run off the land from farms, towns and cities. Yet, for generations, people saw wetlands as dangerous and wasted land and set about filling them in and covering them over. It wasn't until late in the 1900s that people realized the vital importance of wetlands and set about protecting and reclaiming them. Michigan's wetlands include swamps, bogs, marshes and fens.

Swamps are forested wetlands. Their plant life is woody – trees and shrubs. Swamps are often found in the floodplains of rivers, streams and lakes. They are rich habitats full of wildflowers in the spring. Michigan's swamps have red and silver maples, cedars, balsams, willows, alders, black ash, elms, and dogwoods. It is habitat for frogs, salamanders, owls, raccoons, and many songbirds.

Marshes have plant life that is soft-stemmed and rises out of standing water. These include cattails, grasses, sedges, rushes, arrowhead, pickerel weed, and smartweed. Michigan's marshes are found around lakes and along rivers.
Marshes are vital habitat for the feeding and reproducing of fish, water birds – ducks, geese, herons, cranes, rails, song birds, frogs, reptiles and many mammals (muskrats, beaver, and otter).

Bogs form when ponds and glacial kettle lakes fill in with decaying plants. It can form a mat around the open water or fill in completely forming a spongy mat of peat covered by sphagnum moss. The acidic environment (where there is little oxygen and nutrients) creates very slow decomposition of plant matter. For plants to survive in a bog, they must be acid tolerant like orchids, sundews, pitcher plants, labrador tea, tamarack, and black spruce.

Fens differ from bogs in that they are found over calcareous soils so are alkaline instead of acid. They are often in or near prairie habitats and have enough nutrients to support a rich diversity of plants.

Grasslands
Found only in the southwest region of the state, Michigan's oak savannas support the wildflowers, insects, and birds of a prairie habitat. Where once wildfires kept the savannas open, now people must cut trees and do control burns to keep them open.

Great Lakes
Michigan's lakeshore has more freshwater sand dunes than anywhere else on Earth. Formed by wind off the lakes, there are parallel dunes along large shallow bays and on the mouth of rivers on the eastern shore of Lake Michigan. There are also blowouts – u-shaped dents blown in stable dunes where the sand "blows out" and covers (and uncovers) whole forests. Erosion caused by fires and human activities can cause blowouts to occur. There are also perched dunes which sit on top of ridges along the shoreline of the Great Lakes left by the retreating glaciers.

The actual beaches of the Great Lakes are not rich habitats like ocean's tidal zones. Blowing sand, pounding waves, winter ice and snow make this an unfriendly habitat. Few plants or animals live on the beach though scavenging insects, birds and mammals do search for food washed up daily.
Above the wind and erosion line, stable dunes support dune forests of oak hickory in the south and beech, maple and hemlock in the north. 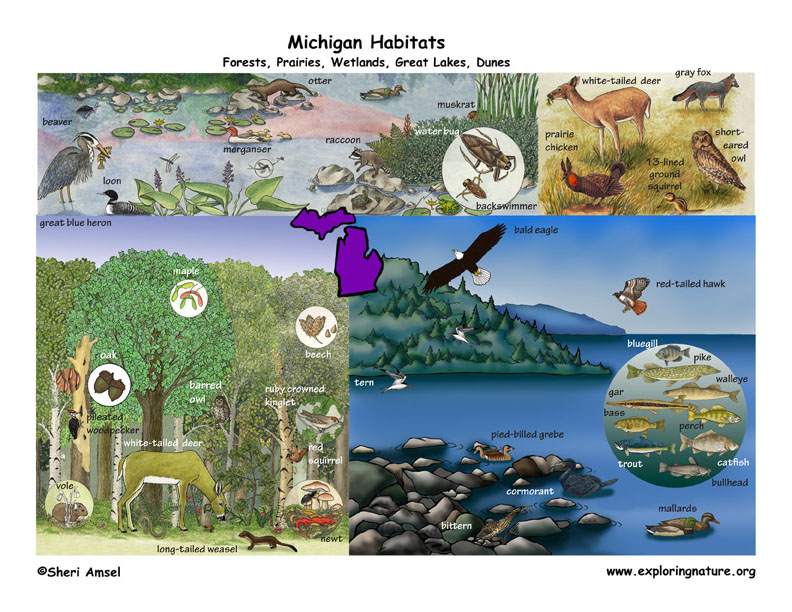 For more information about Michigan mammals (including Latin names) click on individual animal links. For another (off-site) resource: LINK 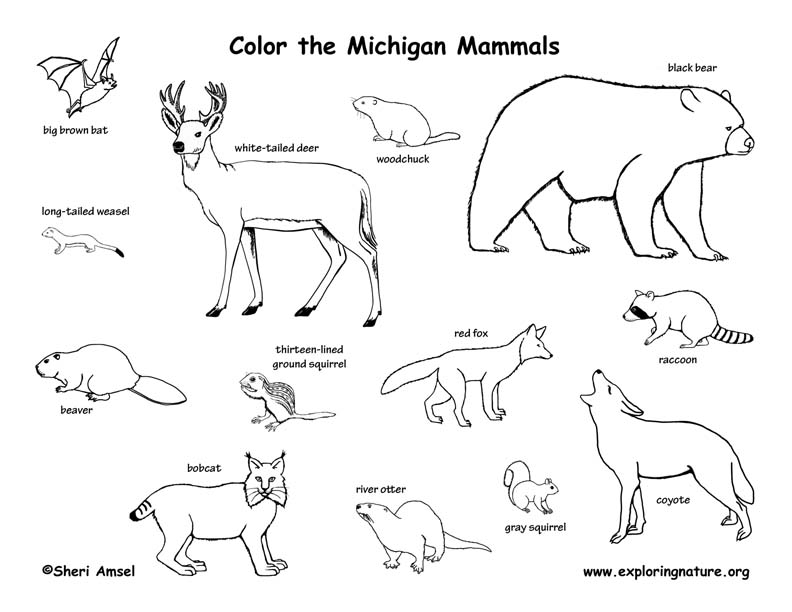 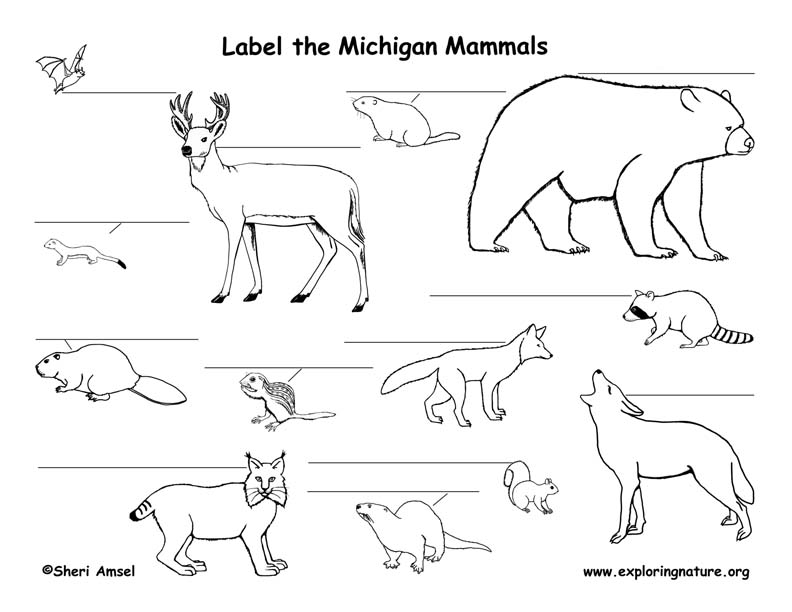 For more information about Michigan amphibians and reptiles (including Latin names) click on individual animal links. For another (off-site) resource: LINK 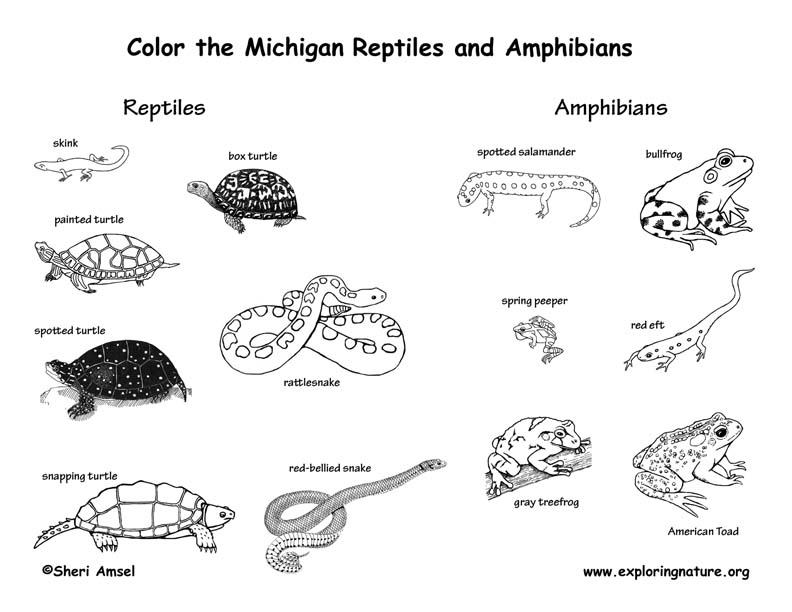 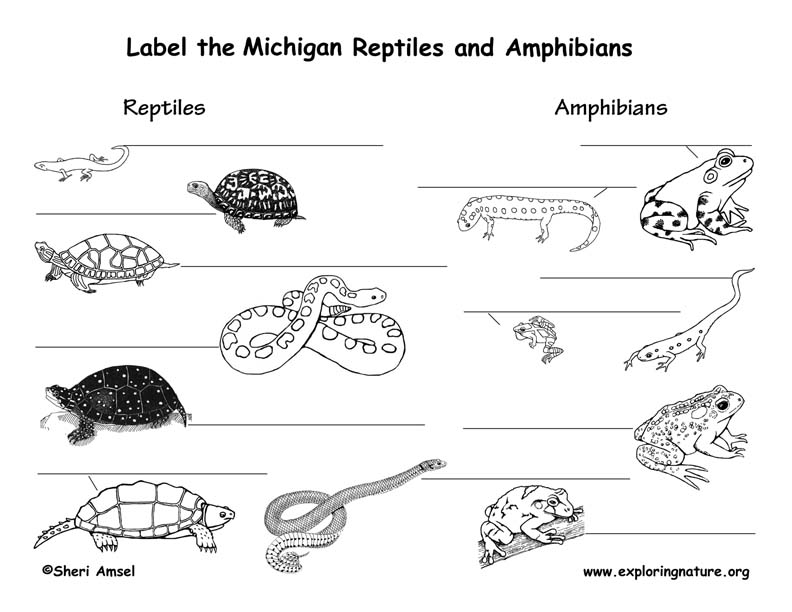 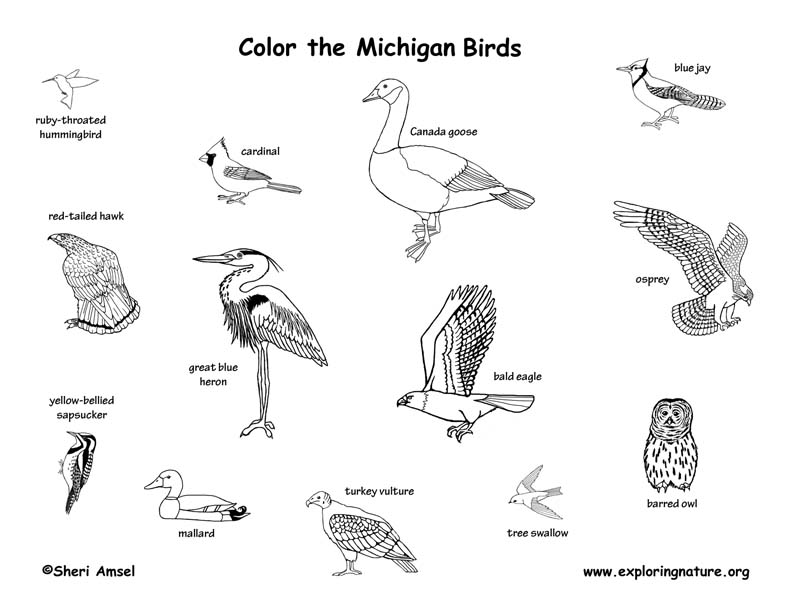 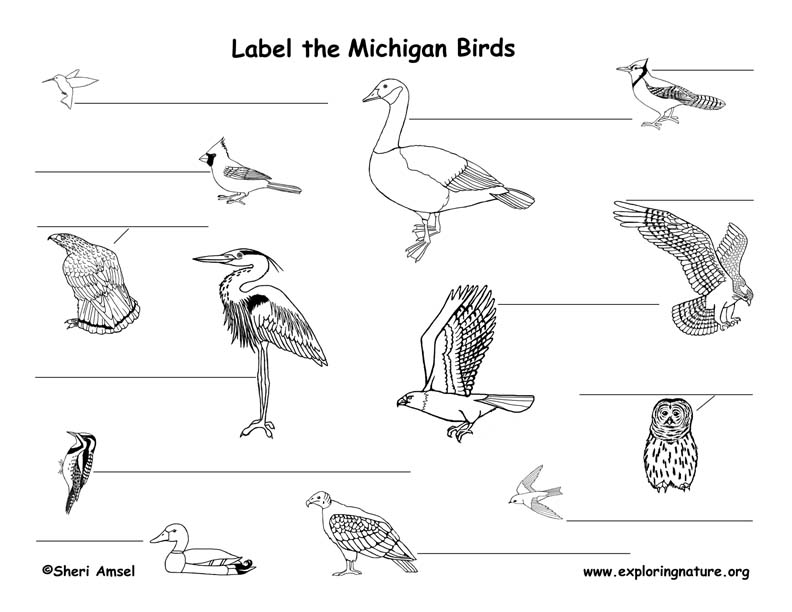 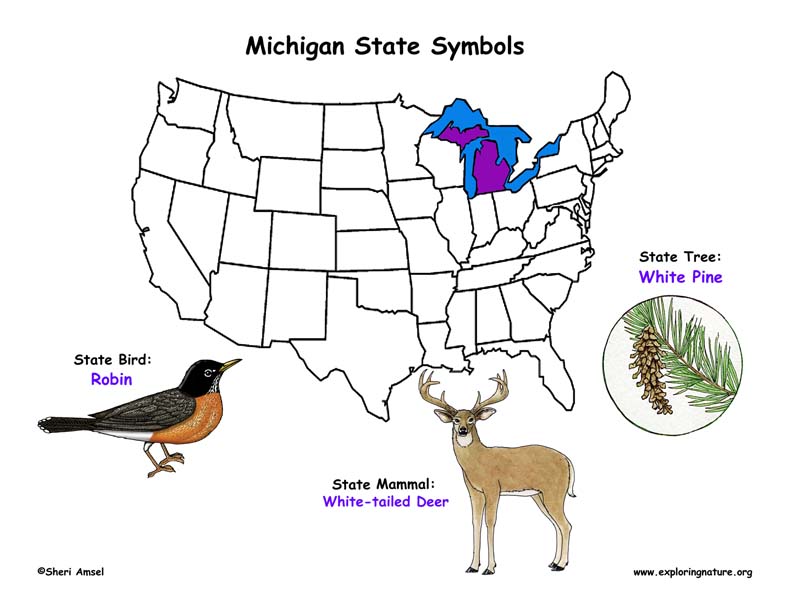 ©2005-2023 Sheri Amsel. All rights reserved.
The material on this site may not be reproduced, distributed, transmitted, cached or otherwise used for anything other than free educational use. It is not to be used for sale or profit of any kind. If you are unsure whether your use of site materials violates the exploringnature.org copyright, contact Sheri Amsel for prior written permission at sheri@exploringnature.org. Thank you for respecting copyright laws.
Site Developed by Eli Madden
Page ID: 823
IP: 35.173.35.14