Students will understand and apply scientific concepts, principles, and theories pertaining to the physical setting and living environment and recognize the historical development of ideas in science.

Organisms inherit genetic information in a variety of ways that result in continuity of structure and function between parents and offspring.

“As students investigate the continuity of life, emphasis should be placed on how plants and animals reproduce their own kind. Teachers should lead students to make observations about how the offspring of familiar animals compare to one another and to their parents. Students know that animals reproduce their own kind—rabbits have rabbits (but you can usually tell one baby from another), cats have kittens that have different markings (but cats never have puppies), and so forth. This idea should be strengthened by a large number of examples, both plant and animal, upon which the students can draw. Students should move from describing individuals directly (e.g., she has blue eyes) to naming traits and classifying individuals with respect to those traits (e.g., eye color: blue). Students can be encouraged to keep lists of things that animals and plants get from their parents, things that they don’t get, and things that the students are not sure about either way.” From the Elementary Science Core Curriculum Guidelines

Recognize that for humans and other living things there is genetic continuity between generations.

2.2a Plants and animals closely resemble their parents and other individuals in their species. 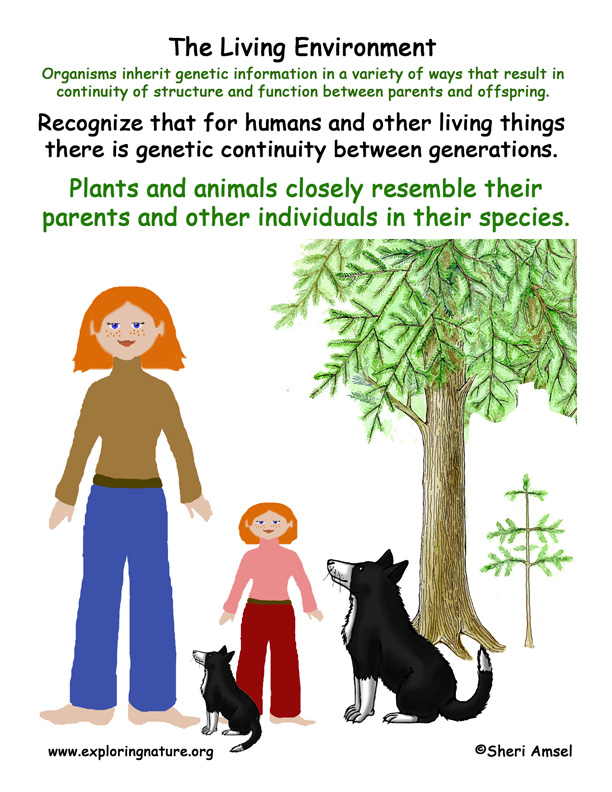 ©2005-2022 Sheri Amsel. All rights reserved.
The material on this site may not be reproduced, distributed, transmitted, cached or otherwise used for anything other than free educational use. It is not to be used for sale or profit of any kind. If you are unsure whether your use of site materials violates the exploringnature.org copyright, contact Sheri Amsel for prior written permission at sheri@exploringnature.org. Thank you for respecting copyright laws.
Site Developed by Eli Madden
Page ID: 2350
IP: 44.200.175.255