Layers of the Skin 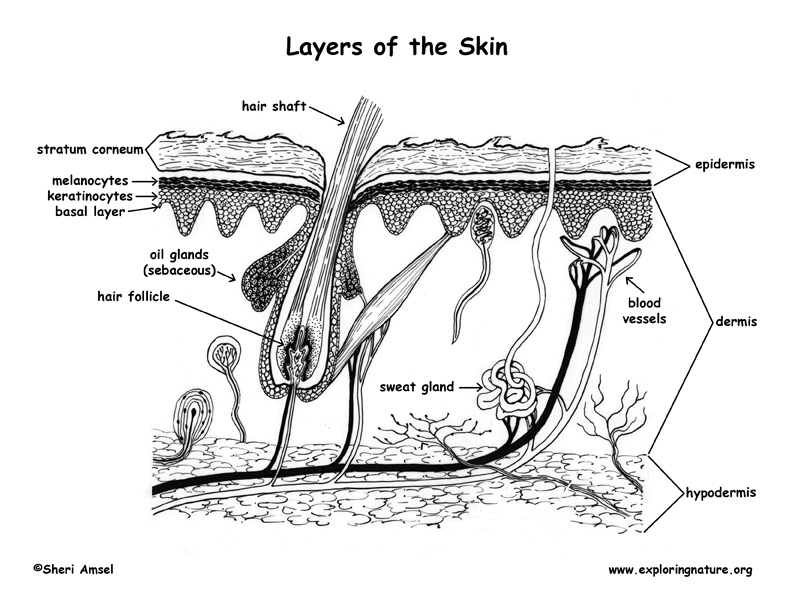 Your skin, which is also called integument or epithelium, is an organ. It is actually the largest organ of the body making up about 7% of your body weight. That means that a 200-pound adult has about 3,000 square inches of skin, which weighs about 14 pounds.

• Fingerprints are friction ridge patterns on our finger and toe pads that help us grip things without slipping. No two people have the same fingerprints.

• The skin reacts to the external environment, but also to what is going on inside the body. A fever (felt through the skin) tells us there is an infection that the body is fighting off. A rash shows an allergic reaction of some kind. Wrinkles show aging and freckles can mean sun damage.


• The most common form of cancer in the U.S is skin cancer. Skin cancer can be prevented by covering or applying sunscreen to the epidermis.


• Skin heals from injury all the time. Tiny scrapes to the outer layer of epidermis triggers new cells (keratinocytes) to grow to replace the ones that are scraped off. Injuries that reach down into the dermis (or deeper) where the blood vessels are located will cause bleeding. Sometimes the area heals leaving no trace, but sometimes connective tissue fibers will replace some of the skin cells leaving a scar.


The skin has three layers made up of more than a half million cells.
l. The outer layer of the skin is called the epidermis, which is made up of several layers.
On the outside, the epidermis has many layers of hard, dead cells on the outside called the stratum corneum. These cells protect us by shedding when we touch or run up against another surface. They also keep foreign bodies out and our fluids in. They are why our skin is waterproof. The next layer is made up of the living cells called keratinocytes that become the stratum corneum. Inside that is the basal layer that is actually creating the keratinocytes of the stratum corneum. The epidermis also has cells called melanocytes. They make melanin, a pigment that protects us from ultraviolet (UV) radiation, the dangerous part of sunlight.

ll. The skin’s second layer is called the dermis. The dermis has blood vessels, sense organs, oil and sweat glands and hair follicles. The sense organs in the skin respond to stimuli like heat, cold, pressure, touch and pain. They receive the information and pass it onto the brain for action. The many tiny hairs on your skin are rooted in the dermis. They are attached to the smallest muscles of the body called arrector pili muscle. Cold air or a sudden fright makes these tiny muscles contract and pull the small hairs upright. This is what gives you goose bumps.
The blood vessels in the face’s dermis will expand in cold weather allowing more warm blood to flow there (and keep your exposed face warm). This is why your face gets red in cold weather. This is also what happens when you blush.

©2005-2022 Sheri Amsel. All rights reserved.
The material on this site may not be reproduced, distributed, transmitted, cached or otherwise used for anything other than free educational use. It is not to be used for sale or profit of any kind. If you are unsure whether your use of site materials violates the exploringnature.org copyright, contact Sheri Amsel for prior written permission at sheri@exploringnature.org. Thank you for respecting copyright laws.
Site Developed by Eli Madden
Page ID: 1542
IP: 44.197.198.214