They spread northward up to 200 miles a year reaching the United States in the 1990s.

They were an unwelcome arrival. African bees are much more aggressive than honey bees and will react to a smaller disturbance with violent attacks. They have been known to chase people more than a quarter mile away from their nest. Hundreds of people have died from African bee attacks. All honey bees can sting and should be avoided, but African bees are especially sensitive to being bothered. Be careful out there!

People have tried to solve the problem of these spreading dangerous bees by replacing the queen with the calmer European bee queen. 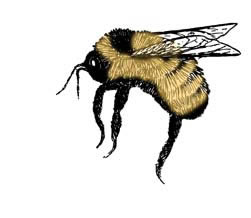 ©2005-2022 Sheri Amsel. All rights reserved.
The material on this site may not be reproduced, distributed, transmitted, cached or otherwise used for anything other than free educational use. It is not to be used for sale or profit of any kind. If you are unsure whether your use of site materials violates the exploringnature.org copyright, contact Sheri Amsel for prior written permission at sheri@exploringnature.org. Thank you for respecting copyright laws.
Site Developed by Eli Madden
Page ID: 1631
IP: 3.87.33.97