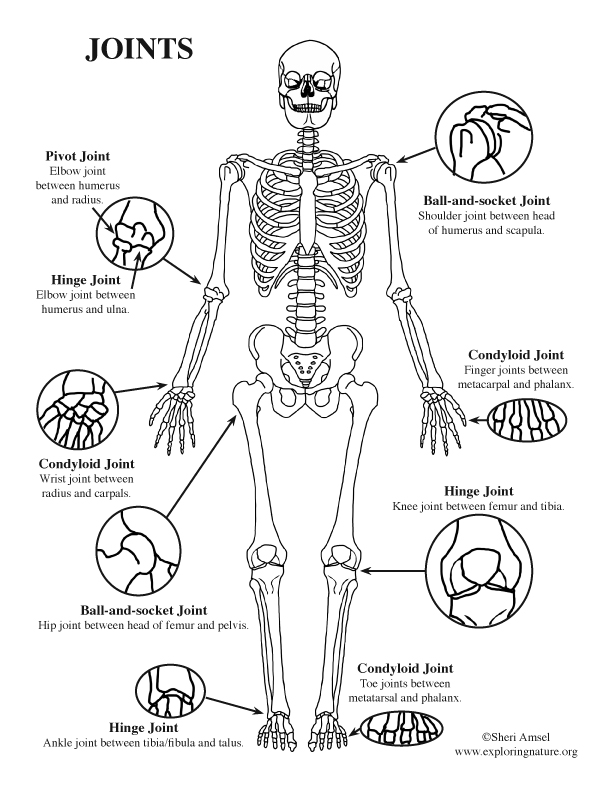 There are many different kinds of joints in the human body. The most common type are synovial joints.

Synovial joints have certain features unique to them:
1) hyaline cartilage covered articulating surfaces on the bones (to reduce friction)

4) synovial fluid to lubricate the joints

5) ligaments that reinforce the joint

Ball-and-socket joints are free moving synovial joints. Because they are free moving, they are unstable joints. Examples of ball-and-socket joints are the shoulder and hip.
With the shoulder joint (also called the glenohumeral joint), there are ligaments that reinforce it anteriorly. Tendons of four muscles encircle and fuse the joint to stabilize it. They are called the rotator cuff. Rotator cuff injuries are common in pitchers. The lack of tendons reinforcing the shoulder joint inferiorly allows free movement but also allows shoulder dislocation. The shoulder joint has many bursae – sacs of synovial fluid that lubricate where tendons, ligaments and muscle rubs against the bone.

With the hip joint there is not as much range of motion as the shoulder. The acetabular labrum is a fibrocartilage ring that depends the acetabulum of the pelvis in which the head of the femur sits to help stabilize it. Many ligaments reinforce the hip.

Despite all these ligaments, the knee joint is weight bearing and is the joint most susceptible to injury. The injury called “clipping” results from a blow to the side of the knee and involves injuries to the medial collateral ligament, medial meniscus and anterior cruciate ligament. 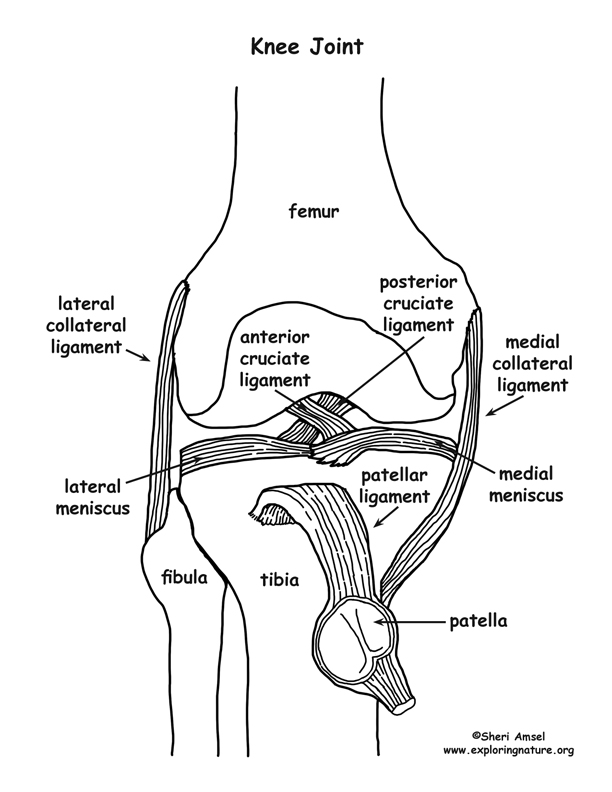 Other synovial joint types include:
Plane joints – which include the joints between the carpals, tarsals and vertebrae.
Pivot joints are when one bone rotates inside another. An example is the atlas and axis (cervical vertebrae) when you rotate your head in a “no” motion.
Condyloid joints have oval ends fitting into concave oval cups as with the knuckle joint.
Saddle joints are like condyloid joints but with more movement like the thumb joint.

*Test your knowledge of synovial joints in the labeling page included in the PDF below.

©2005-2022 Sheri Amsel. All rights reserved.
The material on this site may not be reproduced, distributed, transmitted, cached or otherwise used for anything other than free educational use. It is not to be used for sale or profit of any kind. If you are unsure whether your use of site materials violates the exploringnature.org copyright, contact Sheri Amsel for prior written permission at sheri@exploringnature.org. Thank you for respecting copyright laws.
Site Developed by Eli Madden
Page ID: 4649
IP: 18.232.127.73