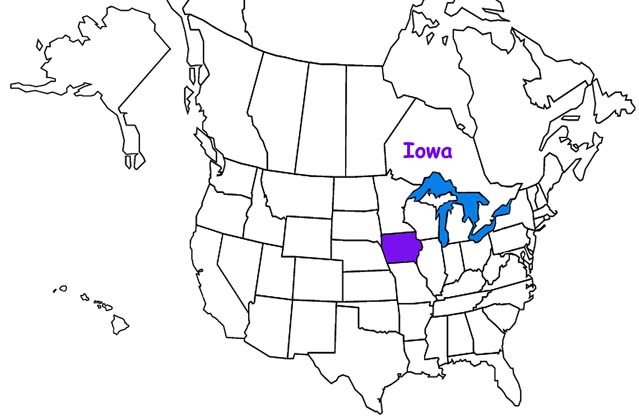 Historically, Iowa's natural communities were prairies, grasslands and savannas. There were also forests that covered the northeastern part of Iowa and riparian forests that ran along rivers and streams throughout the state. Iowa also had many wetlands on the prairie and as part of the waterways. When European settlers came to Iowa, much of the prairie was tilled under for farmland and homes. As more people settled in Iowa, more natural communities were lost to roads, towns and businesses.

Forests
Though Iowa is known for its rolling prairie, when the first European settlers came to the state, there was thought to be about 7 million acres of forest. By 1900, only 2 million acres of forested land remained. Today, it is thought that only a little more than a quarter of Iowa's original forest is left and that is fragmented by development. Most (90%) of Iowa's forest is owned by private landowners. Of the public land, about 40,000 acres make up Iowa's 10 state forests.

The most common forest type in Iowa is upland woodlands. These are forests found on slopes and hilltops. In Iowa, the mature upland forests are mostly oak/hickory forests, but there are also sugar maples, basswoods and black walnuts. Iowa also has riparian forests that run along rivers and streams or in moist ravines. These are called bottomland forests and have trees that can tolerate wet soil including cottonwood, ash, silver maple, basswoods and willows. Northeastern Iowa also has a relatively small but interesting region of evergreen forest with white pine, balsam fir, red cedar and juniper. This area, characterized by rugged hills and valleys, is part of the "Driftless Area," a region of the midwest that was not affected by the last glacial retreat.

Grasslands
Before European settlers found and developed Iowa, more than 80% of the state was covered in tallgrass prairie - that's roughly 30 million acres. Tallgrass prairies of Indian grass and bluestem could grow more than ten feet tall and were the dominant type of prairie in Iowa. Some Iowa prairie has scattered shrubs and burr oaks, so is more accurately described as open savannah. Prairies are also not just made up of grass but have wildflowers like prairie coneflowers, black-eyed susans, prairie sage, butterfly milkweed and others.

Today, it is estimated that less than 1/10 of 1% of the original prairie in Iowa is left in its natural state. With the loss of the prairies, Iowa lost some prairie wildlife too - pronghorn antelope, bison, wolves, and elk are all gone from the state now. Despite their disappearance, prairies were a tough habitat with dense root mats that made tree and shrub growth difficult and allowed quick, vibrant regrowth after fires. It also prevented tilling of the prairie by early settlers. Not until the invention of the steel plow in the mid-1800s, could the thick prairie sod could be turned. By the beginning of the 1900s, the prairie was all but gone.

To see Iowa prairie in its native state, you would have to visit areas where the prairie has been preserved. The largest remaining area of Iowa prairie is found in the Loess Hills in western Iowa along the Missouri River. There are smaller patches of prairie in the dry, rugged hills of eastern Iowa called hill prairies. There are even some very dry prairies called sand prairies. Strangely, some native prairie survives in and around developed areas – along railways and roadsides and in graveyards.

Iowa has created some state prairie preserves and conservation groups like the Nature Conservancy have purchased and protected prairie. People have even begun to restore prairie by reseeding the native plants.

Wetlands
Iowa's wetlands mostly took the form of prairie potholes found in the north central part of the state called the thousand-lake region. These were created by the retreating glaciers. Wetlands are very important habitats. They provide valuable wildlife habitat. They stabilize shorelines and protect the land from flooding in wet times and drought in dry times. They act as filters to pollutants that run off the land. As the prairies were destroyed with development, many of the wetland areas were destroyed as well. By 1950, 90% of Iowa's native wetlands were gone. 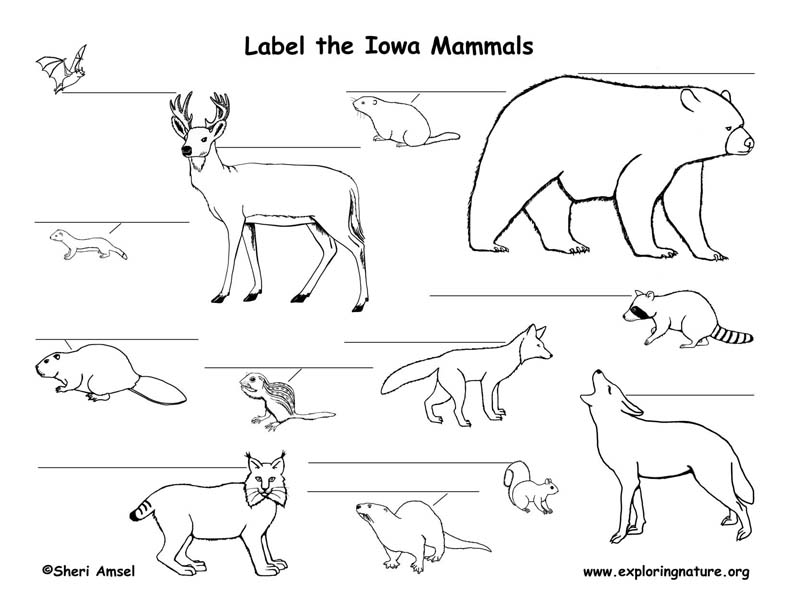 For more information about Iowa amphibians and reptiles (including Latin names) click on individual animal links or for another (off-site) resource: LINK 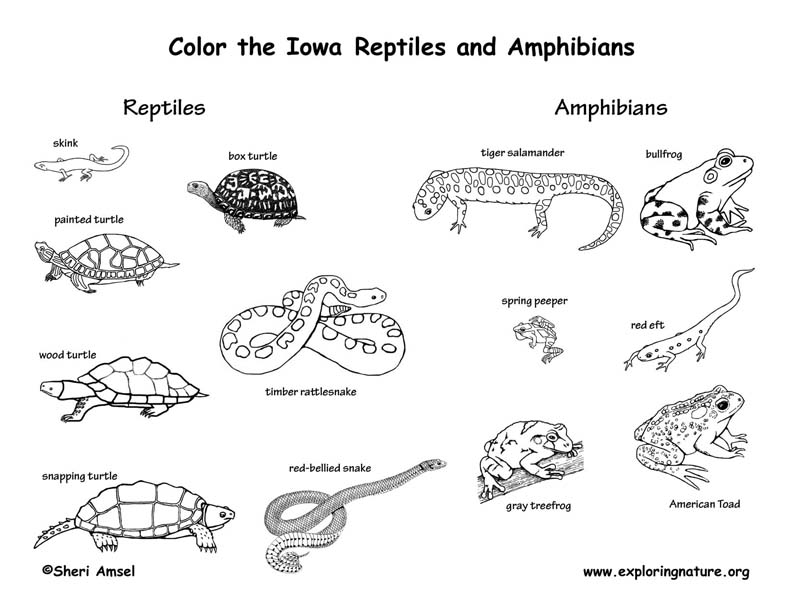 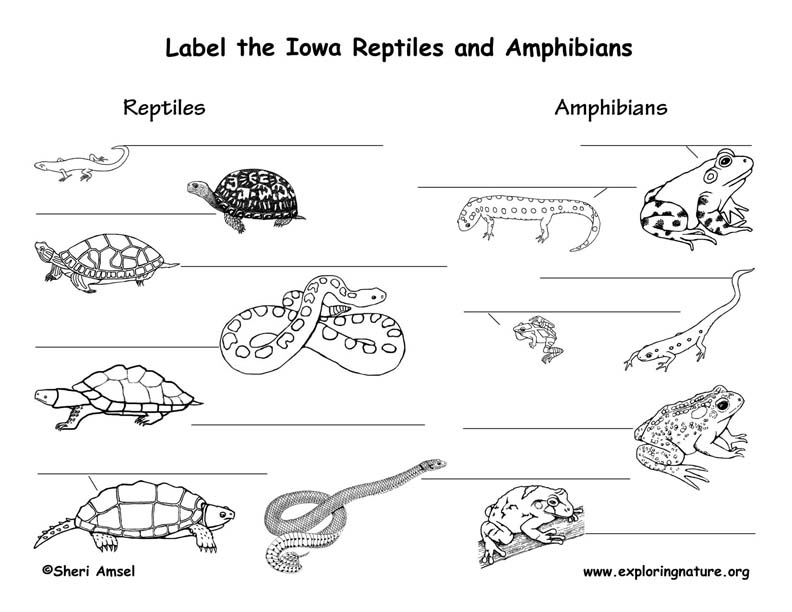 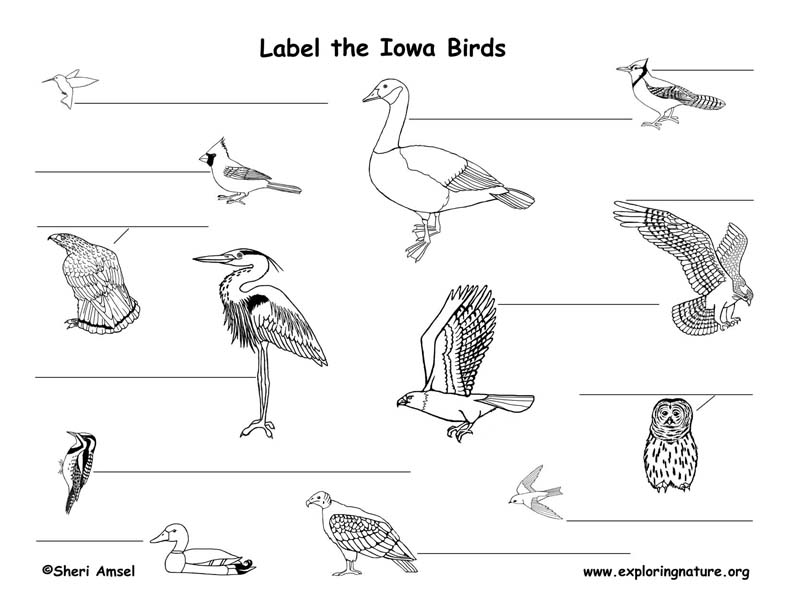 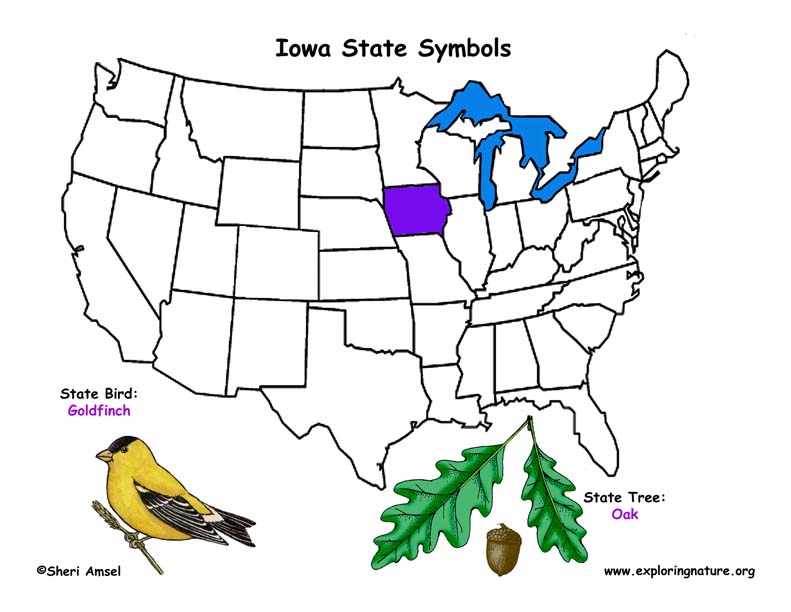 ©2005-2023 Sheri Amsel. All rights reserved.
The material on this site may not be reproduced, distributed, transmitted, cached or otherwise used for anything other than free educational use. It is not to be used for sale or profit of any kind. If you are unsure whether your use of site materials violates the exploringnature.org copyright, contact Sheri Amsel for prior written permission at sheri@exploringnature.org. Thank you for respecting copyright laws.
Site Developed by Eli Madden
Page ID: 832
IP: 35.173.35.14