Inquiry – Understand What it is from Different Sources 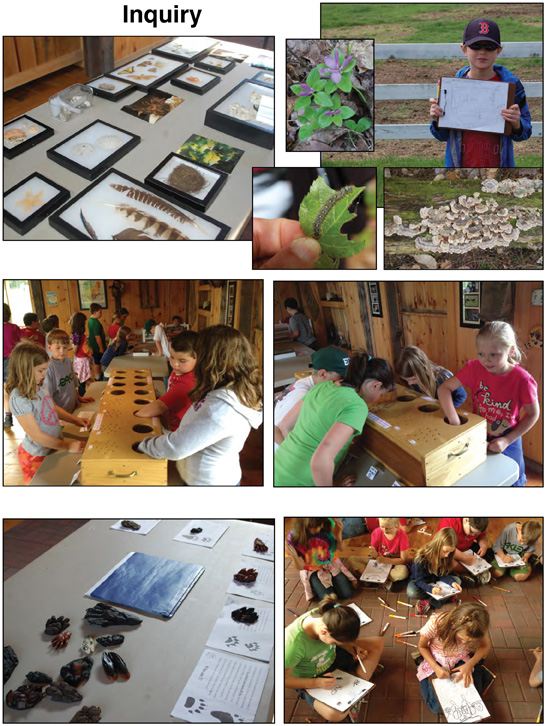 As provided by the National Science Teachers Association (NSTA):

Scientific inquiry reflects how scientists come to understand the natural world, and it is at the heart of how students learn. From a very early age, children interact with their environment, ask questions, and seek ways to answer those questions. Understanding science content is significantly enhanced when ideas are anchored to inquiry experiences.

Scientific inquiry is a powerful way of understanding science content. Students learn how to ask questions and use evidence to answer them. In the process of learning the strategies of scientific inquiry, students learn to conduct an investigation and collect evidence from a variety of sources, develop an explanation from the data, and communicate and defend their conclusions.

Regarding the use of scientific inquiry as a teaching approach, NSTA recommends that science teachers:

Regarding students’ abilities to do scientific inquiry, NSTA recommends that teachers help students:

A)  Learn how to identify and ask appropriate questions that can be answered through scientific investigations.

B)  Design and conduct investigations to collect the evidence needed to answer a variety of questions.

C)  Use appropriate equipment and tools to interpret and analyze data.

D)  Learn how to draw conclusions and think critically and logically to create explanations based on their evidence.

E)   Communicate and defend their results to their peers and others.

a.   That science involves asking questions about the world and then developing scientific investigations to answer their questions.

c.    That scientific inquiry is central to the learning of science and reflects how science is done.

e.   That the evidence they collect can change their perceptions about the world and increase their scientific knowledge.

f.    The importance of being skeptical when they assess their own work and the work of others.

g.  That the scientific community, in the end, seeks explanations that are empirically based and logically consistent.

—Adopted by the NSTA Board of Directors, October 2004

The 5 features of science inquiry, students:

Goals of the NIH Module: Doing Science: The Process of Scientific Inquiry

The Process of Scientific Inquiry

Students explore the basics of scientific inquiry, refine their critical-thinking skills, and appreciate the purpose of scientific research.

l. The first is to help students understand the basic aspects of scientific inquiry. Science proceeds by a continuous, incremental process that involves generating hypotheses, collecting evidence, testing hypotheses, and reaching evidence-based conclusions. Rather than involving one particular method, scientific inquiry is flexible. Different types of questions require different types of investigations. Moreover, there is more than one way to answer a question. Although students may associate science with experimentation, science also uses observations, surveys, and other non-experimental approaches.

ll. The second objective is to provide students with an opportunity to practice and refine their critical-thinking skills. Such abilities are important, not just for scientific pursuits, but for making decisions in everyday life. Our fast-changing world requires today’s youth to be life-long learners. They must be able to evaluate information from a variety of sources and assess its usefulness. They need to discriminate between objective science and pseudoscience.

Students must be able to establish causal relationships and distinguish them from mere associations.

lll. The third objective is to convey to students the purpose of scientific research. Ongoing research affects how we understand the world around us and provides a foundation for improving our choices about personal health and the health of our community. In this module, students participate in a virtual investigation that gives them experience with the major aspects of scientific inquiry. The lessons encourage students to think about the relationships among knowledge, choice, behavior, and human health in this way:

Knowledge (what is known and not known) + Choice = Power

lV. The final objective of this module is to encourage students to think in terms of these relationships now and as they grow older.

Use this to plan an inquiry-based science program by providing short-term objectives for students:

Students become engaged in the process of scientific inquiry.

Scientists learn about the natural world through scientific inquiry.

• Scientists ask questions that can be answered through investigations.

• Scientists design and carry out investigations.

• Scientists think logically to make relationships between evidence and explanations.

Students consider what makes questions scientifically testable. Students gain a common set of experiences upon which to begin building their understanding.

Scientists ask questions that can be answered through investigations.

• Testable questions are not answered by personal opinions or belief in the supernatural.

• Testable questions are answered by collecting evidence and developing explanations based on that evidence.

Students conduct an investigation in the context of a community health department. They propose possible sources of the health problem and describe how they might confirm or refute these possibilities.

• Scientists think critically about the types of evidence that should be collected.

Scientists analyze the results of their investigations to produce scientifically acceptable explanations.

4: Pulling It All Together - Evaluate:

Students deepen their understanding of scientific inquiry by performing their own investigation and evaluating one performed by another student.

Scientific inquiry is a process of discovery.

• It begins with a testable question.

• Explanations are evidence based.

• Scientists communicate their results to their peers.

Use this for ongoing assessment of your instruction and student learning:

Standard A: Science as Inquiry

As a result of their activities in grades 5–8, all students should develop:

Abilities necessary to do scientific inquiry

• Identify questions that can be answered through scientific investigations.

• Use appropriate tools and techniques to gather, analyze, and interpret data.

• Think critically and logically to make the relationships between evidence and explanations.

• Use mathematics in all aspects of scientific inquiry.

• Mathematics is important in all aspects of scientific inquiry.

Structure and function in living systems

• Food webs identify the relationships among producers, consumers, and decomposers in an ecosystem.

As a result of their activities in grades 5–8, all students should develop:

Understandings about science and technology

Technology is essential to science, because it provides instruments and techniques that enable observations of objects and phenomena that are otherwise unobservable.

• The potential for accidents and the existence of hazards imposes the need for injury prevention. Safe living involves the development and use of safety precautions and the recognition of risk in personal decisions.

• Risk analysis considers the type of hazard and estimates the number of people who might be exposed and the number likely to suffer consequences. The results are used to determine the options for reducing or eliminating risks.

• Important personal and social decisions are made based on perceptions of benefits and risks.

Science and technology in society

• Technology influences society through its products and processes.

Technology influences the quality of life and the ways people act and interact.

Science as a human endeavor

• Science requires different abilities, depending on such factors as the field of study and type of inquiry. Science is very much a human endeavor, and the work of science relies on basic human qualities, such as reasoning, insight, energy, skills, and creativity.

• Scientists formulate and test their explanations of nature using observation, experiments, and theoretical and mathematical models.

How does all this promote learning generally and inquiry-based learning specifically?

Instead of passive absorption of materials, students are developing skills, analyzing and evaluating evidence, experiencing and discussing, and talking to their peers about their own understanding - Engage, Explore, Explain, Elaborate, Evaluate.

2. Students build new knowledge and understanding based on what they already know and believe.

3. Students formulate new knowledge by modifying and refining their current concepts and by adding new concepts to what they already know.

4. Learning is mediated by the social environment in which learners interact with others.

5. Effective learning requires that students take control of their own learning.

6. The ability to apply knowledge to novel situations (that is, to transfer learning) is affected by the degree to which students learn with understanding.

Classifying - arranging or distributing objects, events, or information representing objects or events in classes according to some method or system

Comparing and contrasting - identifying similarities and differences between or among objects, events, data, systems, etc.

Inferring - drawing a conclusion based on prior experiences

Note: As an example, these processes are applied in the three key ideas in Standard 1, which outline scientific inquiry. Inquiry may proceed in a cyclical pattern, with students moving from Key Idea 1 to Key Idea 3 and back to 1 again.

*As presented by the State University of New York at: http://www.emsc.nysed.gov/ciai/

©2005-2022 Sheri Amsel. All rights reserved.
The material on this site may not be reproduced, distributed, transmitted, cached or otherwise used for anything other than free educational use. It is not to be used for sale or profit of any kind. If you are unsure whether your use of site materials violates the exploringnature.org copyright, contact Sheri Amsel for prior written permission at sheri@exploringnature.org. Thank you for respecting copyright laws.
Site Developed by Eli Madden
Page ID: 1905
IP: 3.225.221.130