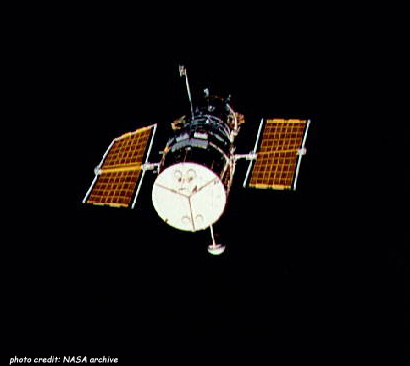 Named after the astronomer, Edwin P. Hubble, this telescope orbits Earth every 97 minutes, 360 miles (575 km) above the Earth's surface in space. The telescope was placed in orbit to take clearer pictures of objects out in space without having to shoot them through Earth's atmosphere, which distorts them. The results were amazingly clear views of the Universe, our solar system and even galaxies far away. The Hubble Telescope was launched in 1990 and has been shooting pictures ever since. It has been serviced by Space Shuttles to improve and upgrade pictures at least four times.

©2005-2023 Sheri Amsel. All rights reserved.
The material on this site may not be reproduced, distributed, transmitted, cached or otherwise used for anything other than free educational use. It is not to be used for sale or profit of any kind. If you are unsure whether your use of site materials violates the exploringnature.org copyright, contact Sheri Amsel for prior written permission at sheri@exploringnature.org. Thank you for respecting copyright laws.
Site Developed by Eli Madden
Page ID: 1846
IP: 44.192.38.49