History of Genetics - How Wild Plants Were Domesticated

Genetics is the study of how living things inherit and pass on certain traits. Even before we understood what genetics was, people were breeding wild plants for the special traits they wanted, like bigger seeds and more fruit. Over time the domesticated plant looked nothing like its wild relative. So the study of genetics has been around for thousands of years, it just wasn’t called genetics!

An example of early genetic engineering was in growing wheat and corn. Einkorn was the first wild form of wheat. It was bred or crossed with different grasses over time to make the wheat we know today. When people cut down or harvested wild wheat, it changed over time. This is how it happened. Wild grains had seeds that would blow in the wind. When people harvested these grains, they collected the seeds for planting next year. But the only seeds they collected where the few that stuck to the plant and didn’t blow away. Planting the clinging seeds grew more plants with more clinging seeds. After many years of only collecting and replanting the clinging seeds, the clinging seed grains were more common than the blowing seeds! Over time most of the seeds were clinging and the wild grain was tamed or domesticated.

Teosinte was the wild ancestor of corn. It is nothing like modern corn found at barbecues today. It started out as wild grass in Central America. Early growers only replanted the seeds of plants with bigger kernels and longer cobs. Over time early corn or maize slowly grew into what we know as corn today. Wild corn was tamed or domesticated. 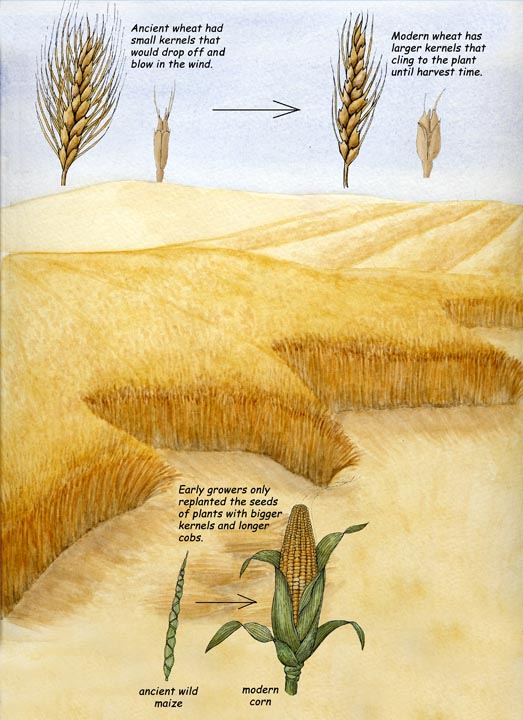 ©2005-2022 Sheri Amsel. All rights reserved.
The material on this site may not be reproduced, distributed, transmitted, cached or otherwise used for anything other than free educational use. It is not to be used for sale or profit of any kind. If you are unsure whether your use of site materials violates the exploringnature.org copyright, contact Sheri Amsel for prior written permission at sheri@exploringnature.org. Thank you for respecting copyright laws.
Site Developed by Eli Madden
Page ID: 1523
IP: 3.91.22.125