History of Genetics - How Animals Were Domesticated

Genetics is the study of how we inherit and pass on certain traits, like eye color and height. Even before we understood what genetics was, people were breeding animals for the special traits they wanted like more wool or milk.

200,000 years ago, during the Stone Age, people hunted and gathered their own food. Stone Age life was very hard. To survive, people had to be very good at hunting, fishing, and collecting wild plants that they could eat. Then, about 10,000 years ago, humans began to tame or domesticate animals. They also started growing their own food — farming. After this, they had enough food all year round. They could live in one place and not have to travel looking for food. They could store food to eat later. Animals helped with farm work and protected their owners. Some animals could be eaten and made into clothes. This made life a lot easier.

Early cultures learned that they could breed different features or traits, like size or color, into their animals or livestock. These traits were passed onto their livestock’s babies or offspring. These early people were seeing dominant genes (genes that showed their traits more often) and recessive genes (genes that showed their traits less often) long before they knew what genes even were. In this way early humans had become the first genetic engineers.

Domesticated animals were often very different from their wild cousins. Humans bred animals for traits that helped them. Seeing how this worked led to big changes in people’s lives. So the study of genetics has been around for thousands of years, it just wasn’t called genetics! 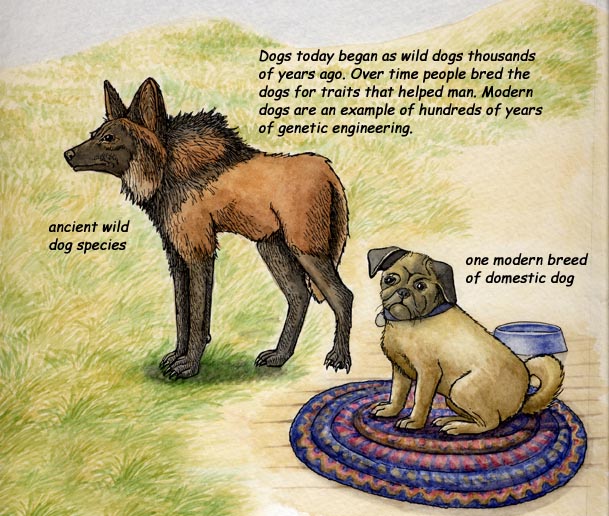 ©2005-2022 Sheri Amsel. All rights reserved.
The material on this site may not be reproduced, distributed, transmitted, cached or otherwise used for anything other than free educational use. It is not to be used for sale or profit of any kind. If you are unsure whether your use of site materials violates the exploringnature.org copyright, contact Sheri Amsel for prior written permission at sheri@exploringnature.org. Thank you for respecting copyright laws.
Site Developed by Eli Madden
Page ID: 1524
IP: 3.238.204.167