A Disciplinary Core List of Standards (NGSS) by Grade

PS1.B Chemical Reactions
Heating and cooling substances cause changes that are sometimes reversible and sometimes not.

PS2.A Forces and Motion
Pushes and pulls can have different strengths and directions, and can change the speed or direction of its motion or start or stop it.

PS2.B Types of Interactions
Pushes and pulls can have different strengths and directions, and can change the speed or direction of its motion or start or stop it. *When objects touch or collide, they push on one another and can change motion. (K-PS2-1)

PS3.C Relationship Between Energy and Forces
Bigger pushes and pulls cause bigger changes in an object’s motion or shape. *A bigger push or pull makes things speed up or slow down more quickly. (secondary to K-PS2-1)

PS4.B Electromagnetic Radiation
Objects can be seen only when light is available to illuminate them. *Some materials allow light to pass through them, others allow only some light through and others block all the light and create a dark shadow on any surface beyond them, where the light cannot reach. Mirrors can be used to redirect a light beam. (Boundary: The idea that light travels from place to place is developed through experiences with light sources, mirrors, and shadows, but no attempt is made to discuss the speed of light.) (1-PS4-3)

PS4.C Information Technologies and Instrumentation
People use devices to send and receive information.

Students who demonstrate understanding can:

2-PS1-1. Plan and conduct an investigation to describe and classify different kinds of materials by their observable properties. [Clarification Statement: Observations could include color, texture, hardness, and flexibility. Patterns could include the similar properties that different materials share.]

2-PS1-2. Analyze data obtained from testing different materials to determine which materials have the properties that are best suited for an intended purpose.* [Clarification Statement: Examples of properties could include, strength, flexibility, hardness, texture, and absorbency.] [Assessment Boundary: Assessment of quantitative measurements is limited to length.]

2-PS1-3. Make observations to construct an evidence-based account of how an object made of a small set of pieces can be disassembled and made into a new object. [Clarification Statement: Examples of pieces could include blocks, building bricks, or other assorted small objects.]

K-PS2-1. Plan and conduct an investigation to compare the effects of different strengths or different directions of pushes and pulls on the motion of an object.  [Clarification Statement: Examples of pushes or pulls could include a string attached to an object being pulled, a person pushing an object, a person stopping a rolling ball, and two objects colliding and pushing on each other.] [Assessment Boundary: Assessment is limited to different relative strengths or different directions, but not both at the same time. Assessment does not include non-contact pushes or pulls such as those produced by magnets.]

K-PS2-2. Analyze data to determine if a design solution works as intended to change the speed or direction of an object with a push or a pull.* [Clarification Statement: Examples of problems requiring a solution could include having a marble or other object move a certain distance, follow a particular path, and knock down other objects. Examples of solutions could include tools such as a ramp to increase the speed of the object and a structure that would cause an object such as a marble or ball to turn.] [Assessment Boundary: Assessment does not include friction as a mechanism for change in speed.]

K-PS3-1. Make observations to determine the effect of sunlight on Earth’s surface. [Clarification Statement: Examples of Earth’s surface could include sand, soil, rocks, and water.] [Assessment Boundary: Assessment of temperature is limited to relative measures such as warmer/cooler.]

1-PS4-1. Plan and conduct investigations to provide evidence that vibrating materials can make sound and that sound can make materials vibrate. [Clarification Statement: Examples of vibrating materials that make sound could include tuning forks and plucking a stretched string. Examples of how sound can make matter vibrate could include holding a piece of paper near a speaker making sound and holding an object near a vibrating tuning fork.]

1-PS4-2.  Make observations to construct an evidence-based account that objects in darkness can be seen only when illuminated. [Clarification Statement: Examples of observations could include those made in a completely dark room, a pinhole box, and a video of a cave explorer with a flashlight. Illumination could be from an external light source or by an object giving off its own light.]

1-PS4-3. Plan and conduct investigations to determine the effect of placing objects made with different materials in the path of a beam of light. [Clarification Statement: Examples of materials could include those that are transparent (such as clear plastic), translucent (such as wax paper), opaque (such as cardboard), and reflective (such as a mirror).] [Assessment Boundary: Assessment does not include the speed of light.]

1-PS4-4.  Use tools and materials to design and build a device that uses light or sound to solve the problem of communicating over a distance.* [Clarification Statement: Examples of devices could include a light source to send signals, paper cup and string “telephones,” and a pattern of drum beats.] [Assessment Boundary: Assessment does not include technological details for how communication devices work.]

Print them out for display in classroom.

(Poster PDF is large so will take a few momemts to load.) 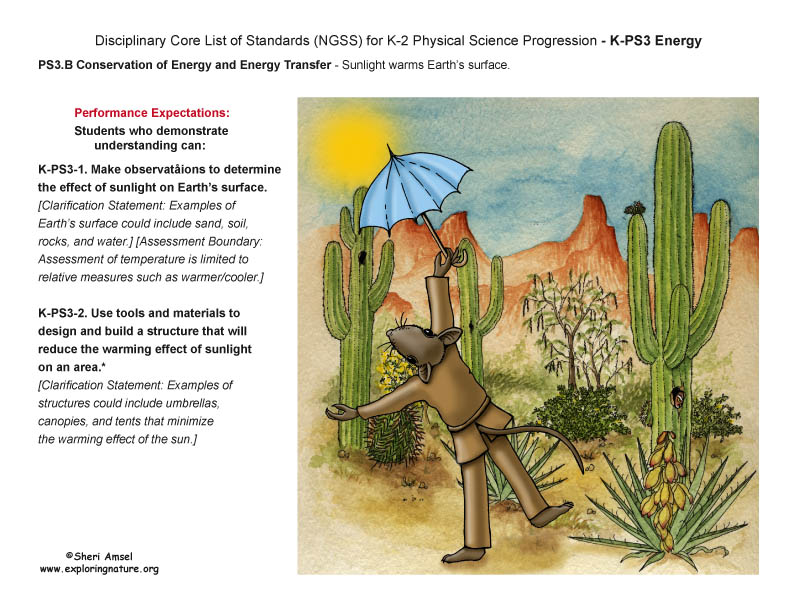 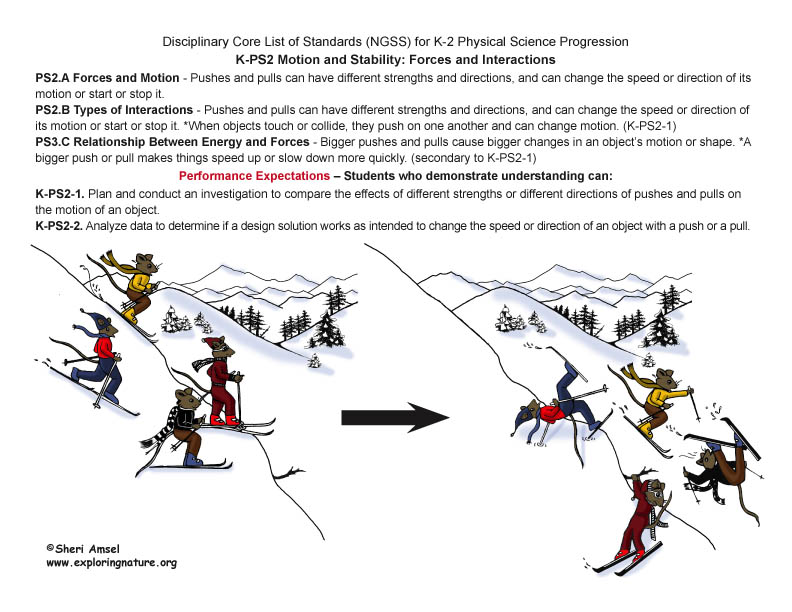 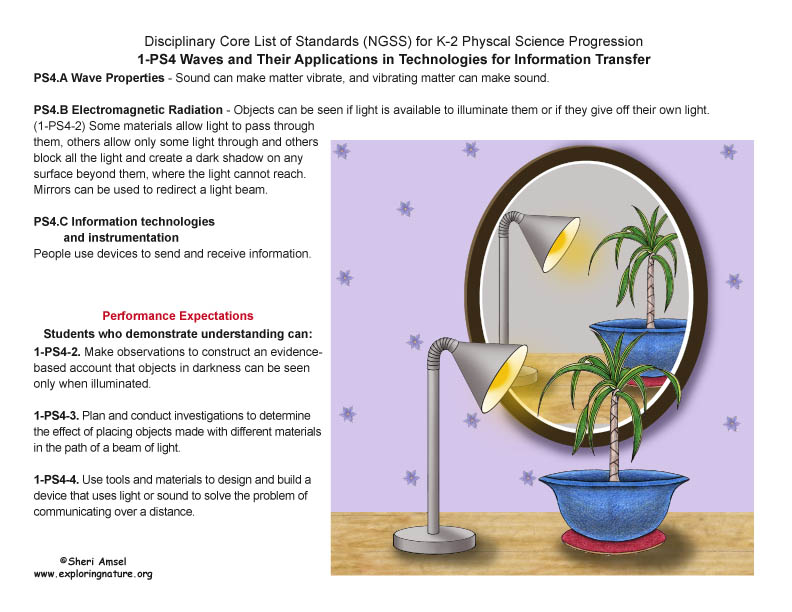 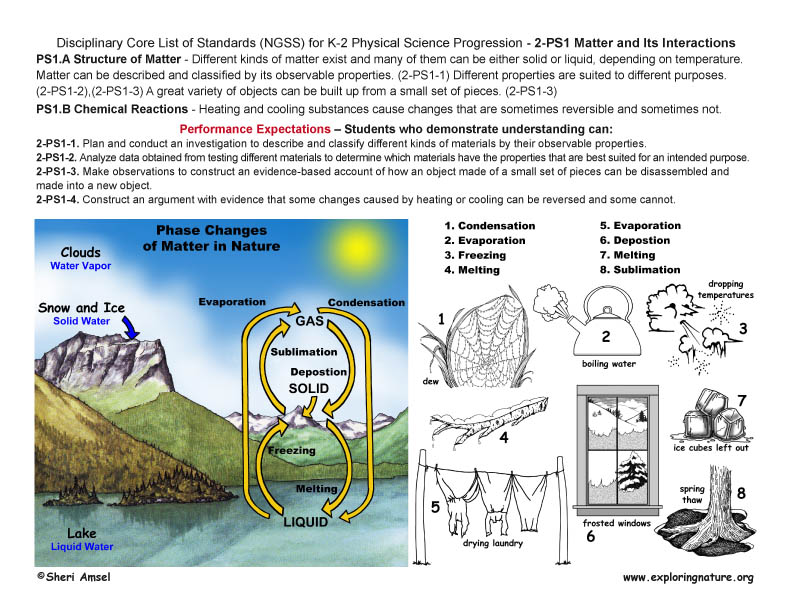 ©2005-2022 Sheri Amsel. All rights reserved.
The material on this site may not be reproduced, distributed, transmitted, cached or otherwise used for anything other than free educational use. It is not to be used for sale or profit of any kind. If you are unsure whether your use of site materials violates the exploringnature.org copyright, contact Sheri Amsel for prior written permission at sheri@exploringnature.org. Thank you for respecting copyright laws.
Site Developed by Eli Madden
Page ID: 1988
IP: 44.200.175.255